Hey ya'll! I finally got around to re-testing one of my favorite cookbook recipes last night. And this time, I took some much-needed advice from my testers (thanks testers!). Here's my new and improved Country Fried Tempeh Steak with Soymilk Gravy: 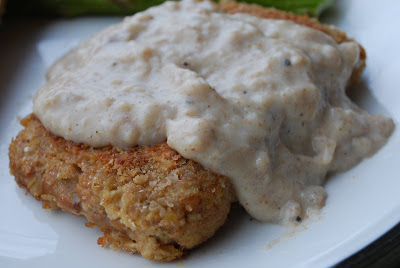 It's not health food. That's for certain. It's breaded, fried, and smothered in definitely-not-fat-free gravy. But it's good. And sometimes that's what matters. Fried foods are great in moderation (or so I choose to believe).

On the side, I tried Susan V's Wasabi-Roasted Asparagus from Fat-Free Vegan Kitchen: 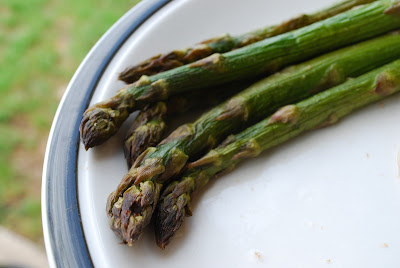 It was tasty, but next time I'm adding WAY more wasabi. Susan's recipe calls for as little or as much as you want, based on your personal taste for spiciness. Since I love the sinus burn from wasabi, I needed much more. I used 3/4 teaspoon of wasabi powder and I could barely taste it. Even still, the sesame oil gave the roasted asparagus a tasty flavor.

I also made a batch of Whole Wheat Sourdough Bread from Bean Vegan: 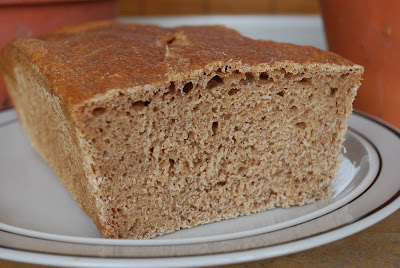 Stephanie (Poopie Bitch) gave me a jar of sourdough starter that she made from her batch (which she got from Bazu in the mail). This was my first time working with the starter (which I've named Lestat, like the vampire ... cause it will live forever so long asI feed it), and I was really impressed with the strong sourdough flavor. I slathered a slice with Earth Balance and ate it with this meal.

On a final sweet note, I made these Neopolitan Bars from the April issue of VegNews: 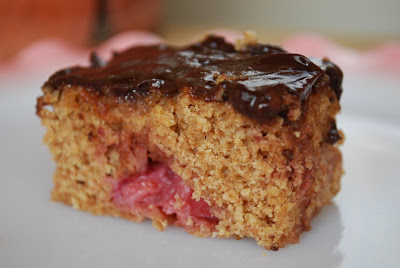 They're one of Hannah Kaminsky's (of My Sweet Vegan fame) recipes, and man were they delicious! The cake part was a bit like a blondie spiked with my hand-picked organic strawberries. These are topped with a rich chocolate ganache. My only complaint — the ganache recipe calls for way too much liquid. I had to add extra chocolate chips to make it creamy, and though the picture in the magazine shows the ganache all firmed up, mine never set. Still tasted delicious though!
Posted by Bianca at 10:15 PM

Hey Bianca! so do you think our recommended tester changes improved it? was it mainly just cutting the tempeh in half horizontally? it looks beautiful!

also, i love that you made whole wheat sourdough! i love sourdough bread, but i have a huge aversion--one could almost say, fear--to refined flour and it seems like sourdough is never whole wheat! i'll need to try that some time. was it delicious? :)

Everything looks so good, and now I totally want to make that tempeh again - it's so delicious!

I'm loving asparagus season - we've started getting it from our CSA and I'm making roasted asparagus every week now, it's my new favorite thing.

So, I can come visit for some of your Southern Fried foods, right?

ugh, I'm trying to stay away from desserts right now but I have seen so many yummy desserts posted on blogs lately, it's getting to be so tempting!!

dang, I'm trying to be good and not fry stuff but that steak looks great!! The cake is gorgeous looking too.

the batter on your tempeh looks sooo good! I agree that fried foods are definitely all right in moderation.

i love whole wheat sourdough. i use my from the artisan bread recipe and it's soooo good.

Hell yeah! I love some country fried food :) Definitely a once-in-a-while food, but oh so delicious!

And I totally feel you on the asparagus. I'm a wasabi fiend.

You are impressive with all that cooking!

The tempeh and gravy looks amazing!

Everything looks so yummy! I need to make more of your stuff...

So, um, I know we're getting together next Friday for Prodigious Vegan Sushi Madness Extravaganza 2009, and I know you're doin' the whole Music Fest thing this weekend, but I sorta miss you. Aaaaaaand... I want your food.

All of this looks delicious! But of course I like the asparagus best :)

Everything looks so delicious, Bianca! That tempeh and gravy is about what I'm craving for dinner right now, and I'm intrigued by your sourdough.

i'm so super jealousfaced that Steph got some of Bazu's starter and gave some to you! that's SO AWESOME! glad the bread was super scrummy! i love slices of bread slathered in earth balance. mmmmmmm! your country fried tempeh steak looks PERFECT! good lord, Bianca - i'm gonna have to make 'em again! they're sooooo delicious! and those neopolitan bars, the wasabi asparagus - dayyyyyum - i want it ALL! hope you have a glorious weekend, Bianca! superw00t!

I made those neopolitan bars from VegNews over the Easter weekend and OMG they were so good!!
And your tempeh looks delicious!

mmm all the food looks sooo good..
but the neopolitan bars won me over...i guess i just have too big of a sweet tooth ;)
the gravy looks so creamy and delicious though!

Yum! I would love to eat that tempeh.

Soooooooo sorry for not commenting lately...but it's all due to the exam session coming on me now..!! =/// finishin' high school is soooo stressful!! =//

omgggggg. I WANT IT ALL!! why must you be such a great cook, while i am anything but?! jealousss!

and omg, i just realized who you remind me of! idk if i've told you that you remind me of someone, but u do, and i can never figure it out! but i finally figured it out-- the main girl on the progressive auto insurance commercials!!! do u know who i'm talking about?! you remind me sooooo much of each other!

all looks great. i am going to go out and buy some Tempeh again.
so healthy! yumm

The soymilk, gravy is to die for! Gosh.

And the ganache- brilliance, I say!

yeah, I love that you're out there representing fatty fried southern cooking! If it's good, why not eat it? I'll have to try one of your recipes soon, I think, something breaded and starchy or proteiny, yum!

I think a delicious not-so-healthy meal on occasion is a great idea. That is a great looking southern fried favorite.

I missed that cake recipe - gonna go check it out!

I know it's completely and totally unfood related...but I demand a post about the FOB show. I know you went

No healthfood, but oh so good, right?

I also have a bazu starter and it's the best starter I've ever had. I haven't killed it once and the bread always comes out awesome.

I just want to say, the name Lestat is genius! xo