Since I'm on a bit of an Uncheese Cookbook kick, I couldn't resist making a batch of the Chedda Biscuits for breakfast this week: 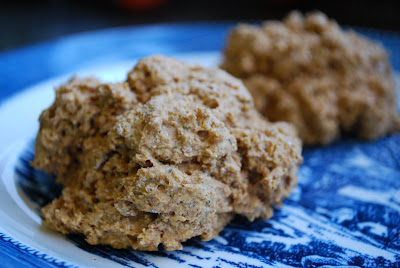 These are unlike any biscuits I've ever made. For one thing, they're drop biscuits so they don't have the smooth look of my homemade rolled-out biscuits. That explains the funky shape.

I also load my homemade biscuits down with non-hydrogenated shortening and soy margarine because I believe those things are necessary to create a fluffy, flaky biscuit. But Joanne Stepaniak's uncheese recipes tend to be on the low-fat side, so this recipe didn't call for any fat.

The result? A much drier biscuit than I would have liked. However, these little guys — flavored with nooch and dill — had a savory kick that would be perfect for dipping in a creamy bowl of soup.

I served my mornin' biscuits with Tempeh Breakfast Sausage from Judy Brown's Guide to Natural Foods Cooking, an old vegan hippie cookbook I found at a thift store: 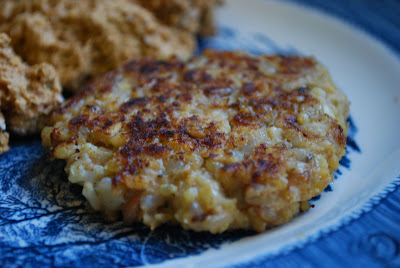 These were tasty! They're made with crumbled tempeh and flavored with miso, sage, garlic, and cayenne. The patties don't hold together very well, but they were perfect stuffed in between heavily Earth Balanced biscuits (hey, I had to add some fat in there!).

Hey testers! My Mint Julep brownie recipe is up on the tester blog....just so ya know.
Posted by Bianca at 10:23 PM

Both the biscuits and the sausages look fantastic! Maybe you can just add some shortening to the biscuit recipe. :) I've loving your old-school hippie-core breakfast.

I think those biscuts look great - I usually make drop biscuts just because they're faster than rolled, but I'm lazy.
I also love the looks of those sausages - it's ok if they don't hold together as long as they taste good!

those sausages look great, it's almost lunchtime and i'm so hungry now.

Delicious! Love those sausages, they sound so flavorful!

Mmm, I love me some vegan sausage and biscuits. How cool that you found that cookbook in a thrift shop!

Sausage and biscuits, one of my favorite meals ever.

Sorry the biscuits were a bit dry, although I'm sure they were delicious in the soup.

Drop biscuits are super great when you're in a hurry (and not in the mood to care about appearances). It's breakfast time and now you've made me incredibly hungry!

I'm thinking I should invest in The Uncheese Cookbook!

Oooooh! What a hearty breakfast! The tempeh patties sound yummy!

the biscuits look great Bianca! I LOVE their rustic appearance....goes well with the southern vibe ;)

The sausage patties look so good!

I think that biscuits should be fatty and light...

Mmm, that is one tasty breakfast! Even though I am not a big tempeh fan, the sausage patties sure sound good.

sweet gloriousness, Bianca! the biscuits 'n sausage look awesome! sorry the biscuits were a bit dry - i'm with you in the added fat make'n the biscuits moist 'n fluffy - but i'm glad the flavor was tasty! nooch & dill sound like they make a delicious flavor combination, indeed! glad ya make the sausages work, too. (don't ya just love how earth balance makes everything taste that much more gooooood!?!) mmmmmmmmm!

Both the biscuits and tempeh sausage look great - really makes me hungry for a serious breakfast! I love reading the older veggie cookbooks from the days when the hippies (bless 'em!) ruled veg cooking...I used to have a cookbook based on recipes from Dead shows, would love to find that again.

how interesting! when I first saw the title of this post, I was wondering, "wait, I thought this is a Vegan blog?" haha...fooled me.

Those sausages look amazing! I convinced my mom to give up sausage, but I know she's eager for a decent alternative. Can't wait to oblige her. Thanks, B! xo

I love drop biscuits... but agree with you that they need some fat in them!! But next time I make some, adding dill and nooch sounds perfect.

I could eat a faux sausage biscuit right now, thanks to your post!