Since I'll soon be writing a story on Bryant Terry's Vegan Soul Kitchen for the Memphis Flyer (the altweekly paper where I work), I'm trying to test as many of his recipes as possible. Last night, I made his Succatoash Soup with Garlicky Cornbread Croutons: 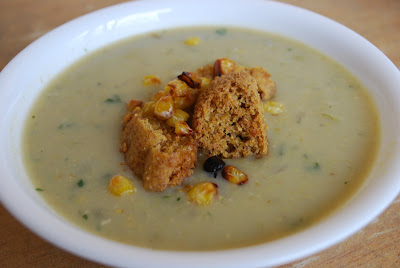 Let me start by saying that this is a damn tasty soup, especially with those crunchy cornbread croutons and broiled corn kernels on top. But I had a bitch of a time trying to make it thanks to my stupid blender. I hate my blender.

After cooking the limas and corn, you're supposed to puree it in "small batches." But I was impatient and loaded the blender at least three-fourths of the way full with piping hot soup. I knew that was a recipe for disaster, but I did it anyway.

I held the lid on tight and hit the blend button. But my hand over the top wasn't enough to stop the pressure. Hot soup exploded all over my countertops, my stove, my walls, my floor, my face. Ick! Huge, huge mess. But I perservered by starting over and blending in smaller batches.

Unfortunately, my blender sucks and didn't do the best job pulverizing the cooked limas and corn. Bryant's soup looks much creamier in the photo illustration in his book. But regardless, it was really delicious.

On another note, I just returned home from a rooftop party (that was actually held in a ballroom due to the threat of inclement weather) at the Peabody Hotel. My favorite local band — Lord T and Eloise — played and they were amazing. 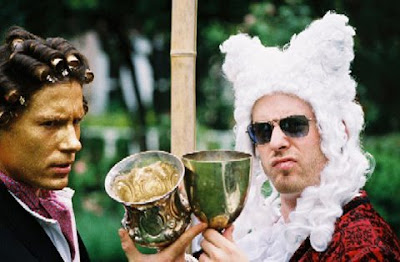 Lord T and Eloise
If I had to pick a musical mascot for my blog, they'd be it. They dress in colonial formals and powder wigs and play aristocrunk with rapper Al Kapone ... it doesn't get much crunker than that. Seriously. Crunk. Memphis crunk.
Posted by Bianca at 10:52 PM

that soup looks beautiful.. i cant get enough of soups lately!

Oh Bianca, I am so sorry! I hope you didn't hurt yourself. The soup looks yummy, but please stop teasing me with stuff from that book. :)

girl, you gotta be more careful!! :) at least the soup looks and tastes amazing! and cornbread croutons?!?! woooowwww....

Yikes!! Thank goodness you didn't get seriously hurt - hang in there!!

On a brighter note, the soup looks fabulous.

I totally empathize with you on the 'explosion'. But I still want to be lazy. So I continue to stuff the blender till its 3/4th full and cover the darn lid with a thick kitchen towel and then hold on to it...and it works like a charm. Take THAT physics ;)

Those guys look awesome. I found them on iTunes to get a listen, very cool.

I got Vegan Soul Kitchen yesterday :) I kept going back to my book store to look at it...I figured if I did that three times, it was worth a buy, right? I can't wait to make some of the stuff! I'm sorry to hear your soup attacked you, but it still looks yummy!

If it makes you feel any better, I'm using the same $20 cheap-o blender that my mom used when I was born. Needless to say, it's not that swell. So yes, chunky soup for me too! :) And you know, I like my soup a little chunky.

I hope you didn't get hurt!

I would totally start laughing if that happened to me =)

The soup looks tasty. I love corn soups. I just hope you didn't get hurt during the blender incident! I hate my blender too, I don't think I've ever had good luck with a blender before.

I exploded a carton of tomato soup all over myself and my kitchen the other day and it wasn't even in a blender. Ha. But, yours was hot, so that sucks more. I'm sorry your soup exploded and hope you are ok....and I will see ya tomorrow! crunk.

Lord T and Eloise!!!! Damn I miss home. I would think your mascot would be more PATDish.

That soup looks yummy. Garlic croutons are the best.

oh no.... blender disaster! where are these people giving away free Vitamixes when we need them, anyway?

I've got my eye on that soup. It's one of many recipes from that book that really looks good. I think I'm going to make the carmelized grapefruit salad for easter brunch.

oh my gosh, Bianca - your blender is the worst! that sucks! i hope you're alright! eek!

i'm glad the soup was super yum, and i'm also glad you got to rock out crunk style! yay! i'm gonna have to check out Lord T and Eloise and see what they're all about. sounds like somethin' i can get into, fo 'sho!

Everyone is talkin' about that book! It's on my list... along with about eleventy others!

Also, I'm sorry your soup e'sploded, but I'm surprised to discover that you don't have an immersion blender!?!

That soup looks delicious! I've been close to that kind of soup disaster so many times! I hope you are OK.

Cool about the article! What a great way to spread the awesome vegan message!

Bummer about the soup accident. Do you ever use an immersion blender?

Love the link to the music.. I'm always looking about for new bands.

Sorry about the soup mess. Glad batch #2 came out well :)

Aww, I'm so sorry you had to clean up a big soupy mess! Kitchen messes suck. At least the soup looks and tasted delicious!

Hopefully the VitaMix people will read this post and send you a little something else to review! ;-)

I love my immersion blender for soups for exactly that reason, it makes everything so much easier. (Plus, my regular blender also sucks, and usually requires a lot of poking to get things actually blended.)

The resulting soup looks great, though! It is definitely going on my list of things to make from that cookbook.

I really love your blog. And especially your raw Tuesdays! On that note, I wanted to show you my new blog, www.choosingraw.com. I hope you'll like it, and that maybe you'd add me to your blogroll? You're up on mine. Check it out, and keep loving your raw days!

The soup looks great! I hate my blender too and it's a fancy KitchenAid. I'm sorry your blender made such a mess. You're lucky you didn't get burned!

I have done that as well =( and it's a bitch to clean up!! Hope you didn't get burned in the process?

My blender sucks too and I really need to buy another one. You are very dedicated to deal with the mess plus start over! The band sounds like a lot of fun!

I so hear your pain about the blender incident. This sort of thing happens to me all the time!

Aww that must have been awful to have to clean up! At least you had a delicious soup in the end. I bet we all have had kitchen mishaps...Mine was using regular dish soap in the dishwasher.

This soup looks delicious, I have got to get that book!

that soup sounds really good...
even with the warmer weather, i still love eating soups :)


We bumped into your blog and we really liked it - great recipes YUM!!! YUM!!!.
We would like to add it to the Petitchef.com.

We would be delighted if you could add your blog to Petitchef so that our users can, as us,
enjoy your recipes.

Petitchef is a french based Cooking recipes Portal. Several hundred Blogs are already members
and benefit from their exposure on Petitchef.com.

To add your site to the Petitchef family you can use http://en.petitchef.com/?obj=front&action=site_ajout_form or just go to Petitchef.com and click on "Add your site"