Last month, a few of my friends and I held our first Vegan Food Swap, in which we all made a dish and split it up four ways so we'd each have plenty of leftovers for the coming weekend. We held the second installment of Vegan Food Swap last Thursday at my house with only three of the original participants.

Stephanie (of Poopie Bitch) made these awesome BBQ Seitan Sandwiches with Coleslaw and Homemade Buns: 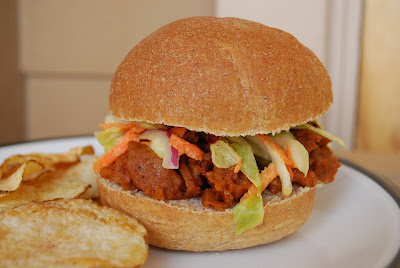 Since it was a swap and not a potluck, we weren't eating right away. Steph packaged two buns for each participant, and we stored seitan and coleslaw in separate containers. Steph's buns were so freakin' amazing! I'd never tried fresh baked buns before, but these may convince me to start making my own. 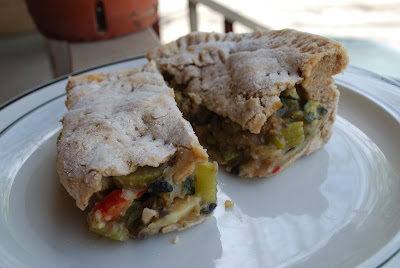 This was stuffed with all sorts of deliciousness - Gimme Lean sausage, black olives, celery, peppers, onions, potatoes (I think). And the crust is really biscuity and light. I still have a few servings of this left and I can't wait to dig in.

I made my Tofu Manicotti with Raid the Garden Marinara: 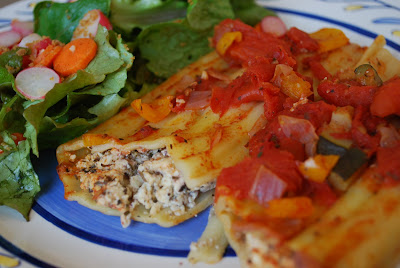 It's a recipe I'm considering adding to my cookbook, though it's not really a Southern dish so maybe I shouldn't. But it's basically manicotti stuffed with ricotta-like herbed tofu. The sauce is made with whole tomatoes and it's super chunky and vegetable-y (yes, I invented that word). I served this with a salad of fresh farmer's market lettuce!
Posted by Bianca at 11:31 PM

What a great idea! I think you should include the manicotti in your cookbook. In Hot Damn & Hell Yeah there are recipes for curries and stuff, and it totally works!

I wish I had enough vegan friends with whom to do a swap. My one veg best friend and i could just swap b/w us...haha. Everything looks wonderful and comfort foody!

that's so cool that you have vegan friends to swap with. mine are all omnis & they don't cook anyway!

Wow, those burgers look really really yummy! And I'm all for adding the manicotti to the cookbook :D Go for it!

food swap sounds like a great idea Bianca :) I love some of these names. Gimme Lean (I think its a wordplay on Jimmy Dean?) and Raid the garden Salsa! Nice :)

i am so jealous of your vegan food swaps! incredibly awesome.

and i don't think your manicotti would be out of place in your book - garden veggies, wholesome comfort food. :)

I wish people from VA could be included in your swap! The food always looks delicious enough to make me want to move down south!

yum! it's such a cool idea. how rad to have other vegan friends who are into cooking. Poopiebitch's sandwich buns really look amazing and perfect! Wow! Also, it's fun because I just made manicotti last night for our family dinner!! One of my favorites of all time.
:) amey

Put that recipe in your cookbook! it sounds great =)

Ooo and the burgers look fabulous as well!

Everything looks so delicious! I totally want to do a vegan food swap. I think you should put the manicotti in your cookbook too!

you are making me so hungry!! All this food looks so good. I would love your manicotti recipe in the cookbook! I know what you mean about it not being traditional Southern food. The only pasta I ate growing up in SC was spaghetti with hamburger tomato sauce.

That is SUCH an awesome idea, Bianca! Perhaps I can arrange one of those here in NYC! Everything looks great, of course :)

hooray for another vegan food swap! Steph's homemade buns 'n bbq seitan look gloriously good, the vegan tortiere looks packed full of yumminesses, and your tofu manicotti is most excellent, Bianca! i think you should totally add the manicotti to your cookbook! it sounds freak'n amazing and looks damn deeeeelicious!

Um, yes. The tofu manicotti has to go in the cookbook, for sure.

That's what I had for dinner today, by the way. Along with a salad made from the lettuce, arugula and radishes I got from the farmer's market. Super-yum!

Oh how I wish I could come to your Food Swaps! .. and I think you should include at least one recipe that is not "southern"!!

I've been meaning to do manicotti. Thanks for the tips on what you do for yours.

If I'm ever in Tennessee I'm demanding to attend one of these events :)

I say definitely include the manicotti in your cookbook if you want to! Southernerss like pasta too, especially the cheese-stuffed variety. I made tofu ricotta stuffed shells for my very southern family's Christmas dinner a few years back and they loved 'em.

Would appreciate recipe/source for that Vegan Tortiere :-)