Sippin' On Some Sorghum Syrup

Ya'll know Three Six Mafia? They're this awesome Memphis crunk rap group that sings "Sippin' On Some Syrup" (but it's pronounced sis-urp). Anyway, they inspired this post's title, which involves a magical breakfast syrup made from sorghum and baking soda.

I made the sorghum syrup for my Sorghum Molasses French Toast: 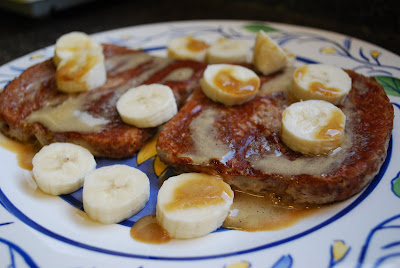 It's another cookbook recipe. The French toast is a simple vegan version with a hint of cinnamon sweetness. For this batch, I used my go-to bread — Ezekieal 4:9 sprouted grain bread. The real beauty, however, lies in that foamy syrup drizzled over the toast.

When you heat sorghum on low heat with a pinch of baking soda, it gets all foamy and fluffy and delicious. Sorghum isn't available in all parts of the country, but molasses makes a great substitute.

What's the difference? Sorghum is made from a certain type of grass and it's a tad bit lighter in color and milder in flavor than it's darker cousin molasses. Molasses is a byproduct of sugarcane or sugar beet production. Both are high in nutrients (like calcium, potassium, and iron). Southerners often mistakenly refer to both products as "sorghum molasses," but they're a tad bit different. Even so, both make delicious syrup when heated with a little baking soda.
Posted by Bianca at 11:06 PM

WOW, that woke me up!

I don't think this syrup is available in Germany, thanks for the substitution tip! I never had French toast or poor knights, as it is called in German. Now I want!

Interesting syrup!! And I'm all over that breakfast!! :-D

This is very similar to the syrup my grandmother used to pour over her carrot cakes. Delish!

I have made vegan french toast before, but this looks just delicious! The banana would go really well i imagine.
If only everyone could see your cooking and realise that vegans dont just eat boiled vegetables :)

i have 2 lbs of sorghum flour with me. I didnt know about what it does when heated with baking soda. Thats a lovely idea Bianca! Will give this a try :)

Oohhh nice! I got some more Southern Girl points just reading this post. I have always heard of sorghum better never really knew too much about it.

i love both sorghum and molasses, sometimes even more than maple syrup, so i am excited to test this recipe! breakfast IS the best meal of the day, and i think this would make a good addition to my b-fast rotation!

oh my gosh, Bianca! i wish i had your french toast for breakfast this morning! mmmmmmm! i've never heard of sorghum before - i'm gonna see if i can find some! and i can't wait to test our your french toast! hooray!

Now THAT is what I want for breakfast tomorrow! WOW!

Foamy goodness! I love it!

Watching Top Chef (with their foam of this and that) made me realize that I don't trust foamy food. It just looks unappetizing to me. However, I miss French toast and I can't wait to try your version. I'm eagerly awaiting this cookbook of yours!

yes the pb and co. cookbook is awesome! i checked it out from my library...i'm not sure if i want to give it back! haha but the cheezy sauce i used was just something i made up, and the amounts were to taste, but the general ingredients were: tahini, lemon juice, salt, soymilk, nutritional yeast. the soymilk really adds the mozz-like flavor...unsweetened, of course!

i stumbled across your blog while searching for a recipe for vegan chicken fried steak. i want to replicate portland's vita cafe's version, which tastes like heaven. i'm really excited about your book. please let me know when it comes out.

is that a photo of your wrist? we have the same (ok, more accurately similar) tattoos.

Hey Andrew! That is my wrist! Vegan tat power!

And my book will have a recipe for Country Fried Tempeh Steak, which is kinda like a chicken-fried steaky thing.

Thanks for stopping by!

I did not know this was possible! And I've never had sorghum. Very cool.