I snack at least once a day, usually twice. My first snack — the morning snack — is typically enjoyed between 10:15 and 11 a.m., after my smoothie has worn off, and before lunch. It's also a time that I'm deep in my work, and I love to have something by my computer to keep me engaged. Salty snacks are the best for that! I was recently sent some samples of Festive Chickpeas in several flavors, and these have been perfect for that mid-morning salt craving. 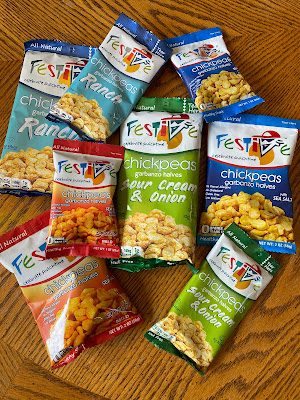 They come in several flavors, but the Sour Cream & Onion and Ranch are my fave — mostly because those are flavors that aren't typically vegan. But these are! And they remind me of the sour cream & onion chips and ranch Doritos I once loved.

They don't say "vegan" on the front, but the back has a list of everything these are free from, and that includes dairy. They're also gmo-free, soy-free, and peanut-free (which makes these a nice snack for people who can't eat peanuts but miss the crunch). 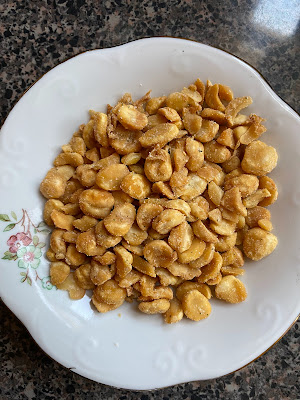 There are two spicy flavors — Spicy Mild and Spicy Fiery. As a spice lover, neither seemed too hot for me, but it's nice that they have an option for people like spice (but not too much).

There's also a Plain flavor, which truth be told, seems a little, well, plain for me on their own. But they've made a perfect addition to salads. I love adding crunchy elements to salads!

One thing vegans should know: While all the other flavors are vegan, the Honey BBQ contains actual honey and is not vegan.

Hmm! I love roasted chickpeas but sometimes they're kind of hard on my teeth. I like that these are chickpea halves- seems like they'd be easier to eat. I'll have to check them out.