Cookbook Review (and Recipe!!): BOSH! on a Budget 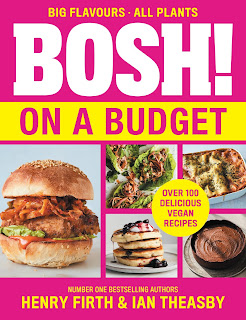 British vegan celebrity chefs Henry Firth and Ian Theasby, better known as the friends behind Bosh TV (the super-popular YouTube cooking channel), have a new cookbook designed for plant-based eaters on a budget. I've always been one to spend WAY too much on groceries, so I could always use budget-friendly shopping tips. But the 100-plus recipes in this book don't look cheap! They look gourmet. But they're not so fancy that they require a lot of expensive ingredients.

The cookbook centers around international cuisine — everything from Swedish-style Meatballs (made from lima beans) to Persian-style Rice Cakes to Indian Tofu Madras. There are Homemade Crumpets from the Bosh brothers' homeland, and there are even a few American-style dishes, like Breakfast Burgers.

This week, I made the Lemon Tofu, and it was SO GOOD. The tofu is cornstarch-coated before you fry it in oil, and then it's tossed with a thick and creamy lemon sauce. I've fried tofu this way before, but it's been a while, and I always forget how good it is! I've never actually had lemon chicken, but this is designed to be a vegan version of that popular Chinese food dish. 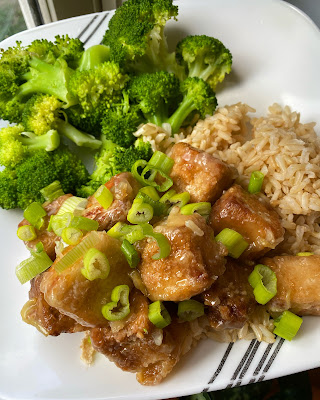 And I promised a recipe, so here ya go! I also made Ian's Simple Shakshuka from the breakfast chapter (and the publisher let me share the recipe below!). This is a vegan spin on the traditional Middle Eastern dish that's made with eggs over a spicy tomato sauce. For the eggs in this recipe, you use unsweetened yogurt for the whites and a yellow pepper tahini sauce for the yolks. It works perfectly because the cool yogurt balances the spicy sauce. 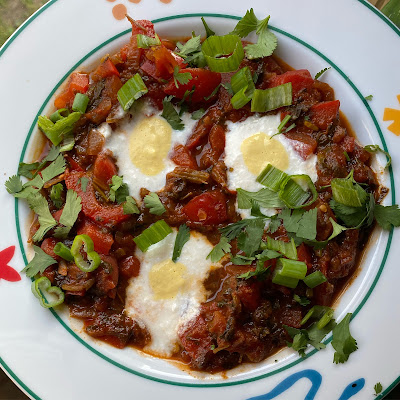 Without further ado, here's the recipe! You should really check out the whole book through because it's loaded with gorgeous photos and easy, tasty (yet fancy-looking) recipes. By the way, the recipe below is British terms because that's the version the publisher shared with me, but the cookbook is written in American terms and with American measurements (or least my copy is! I'm guessing if you order from Amazon from the States, you'll get the Americanized version). That said, I do love to see "tins" instead of "cans" or "yoghurt" instead of "yogurt."

For the 'egg yolks'

For the 'egg whites'

Blacken the peppers • Light your largest gas ring or preheat your grill to high • Put the red and yellow peppers directly on the flame or under the grill for 10-15 minutes, turning them every 5 minutes, until blackened on all sides • Set aside in a bowl to cool and steam with a plate over the top.

Cook the vegetables • Place the frying pan over a medium heat and pour in the olive oil • Peel and finely chop the onion and add it to the pan • Halve the chilli, dice one half and finely slice the other • Peel and grate the garlic cloves • Add the diced chilli and garlic to the  pan and stir, cooking for 5 minutes • Finely chop the coriander stems and add them to the pan, reserving the leaves • Add the oregano and the spices.

Stir and cook for another 5 minutes • Add the tomato puree and sugar and stir for 5-10 minutes, until the mixture is getting darker and sticky.

Add the vinegar to the pan and let it  bubble away and evaporate • Add the tinned tomatoes, bay leaves and cinnamon and a good splash of water and leave to simmer for 8-10 minutes, until thickened and combined • Lower the heat and keep warm until needed.

Peel the peppers • Rub the burned skin from the cooled peppers with your fingers • Seed and roughly chop the peppers• Add the red  pepper to the shakshuka • Put the yellow pepper in the blender.

Make the 'egg yolk' • Add the plant-based mayo and tahini to the blender with the yellow pepper • Squeeze in the juice of the lemon and season with salt • Blend to a paste.

Make the 'egg white' • Put the yoghurt in a bowl • Squeeze  in  the  juice of the lemon and season with salt • Mix to combine.

Finish the shakshuka • Remove the bay and cinnamon sticks from the pan • Taste the shakshuka and adjust the seasoning if necessary• If it looks dry, add a splash of water and stir it in • Make sure it's nice and warm • Press the back of a spoon into the mixture to make 4 wells• Spoon a tablespoon of the 'egg white' into each well • Use a teaspoon to add a spoonful of the 'egg yolk' into the centre of each white.

Serve • Grill or toast the pittas • Scatter the reserved coriander leaves over the shakshuka • Finely slice the spring onion and scatter it over along with the sliced red chilli • Serve the pittas alongside for dipping.