Another Monday, another race recap! Fall racing season is well underway, and it feels like I've had a race nearly every weekend lately (though it's actually been two weeks since my last marathon in Nashville). This past Saturday was the St. Jude Memphis Marathon, and though I've run the full here a couple times, I opted for the half-marathon this year to give my legs a little break after doing two 50ks and a marathon in the past 90 days. 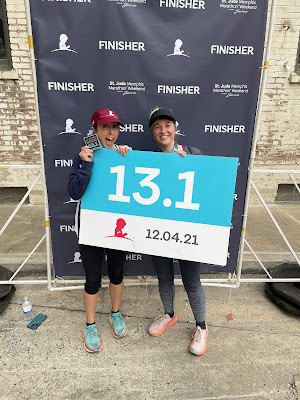 Let's start this post on Friday night with my pre-race pasta dinner. I picked up some dried pasta at Nicoletto's in Nashville when I was there, so I had some of that with jarred mushroom marinara and sauteed mushrooms, plus a lot of noochy-hemp seed parm. 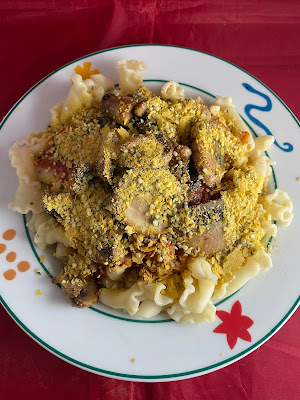 On Saturday morning, I got up around 5 am and had my standard pre-race bagel with almond butter. St. Jude did a staggered start this year, due to the pandemic, so my start time wasn't until 8:45 am, which is fairly late for a race start. My friend Megan was also signed up for the half, and it was her very first one! I was excited to be there running Megan's first half with her. We rode together (Paul dropped us off) and waited near the start line. 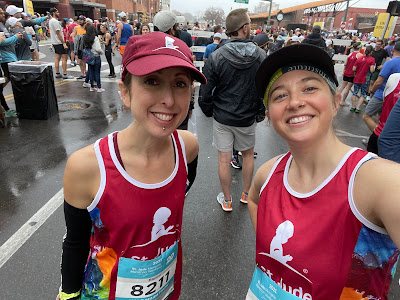 We crossed the start line at 8:45 am, and Megan and I ran together for about four miles, including a jaunt through the St. Jude campus. This race is St. Jude's biggest fundraiser and helps in their mission to never charge families for medical services.

After we passed the campus, I was feeling good, so I tapped Megan on the shoulder and told her I was taking off. I sped up and held a pretty quick (for me) pace for the rest of the race.

Paul is recovering from colon surgery, so I was surprised to see him waiting for me to pass on North Parkway near our house! That gave me a nice burst of energy. 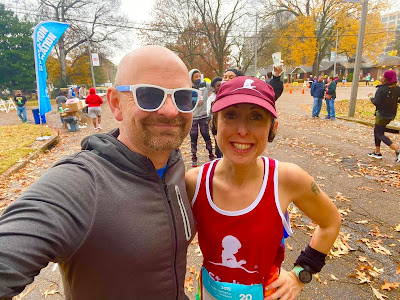 Here's a banner that I helped hang for work the night before the race. It was cool to pass under it on the run. 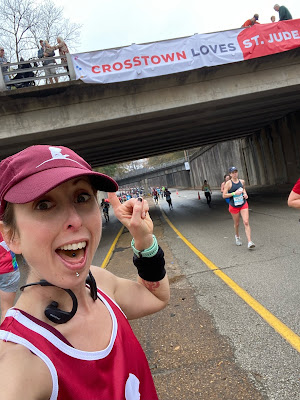 The race was just a giant party this year. Maybe it was all that pent-up energy from missing a year of the race in 2020, but the spectators came out in full force between Crosstown Concourse and Stonewall in the Evergreen neighborhood.

When I passed the Crosstown Memphis CDC cheer station (I sit on the CDC board), fellow member Justin handed me a shot of Fireball. So I took that! Also, another CDC member Anna Joy ran with me to cheer me on for a bit! 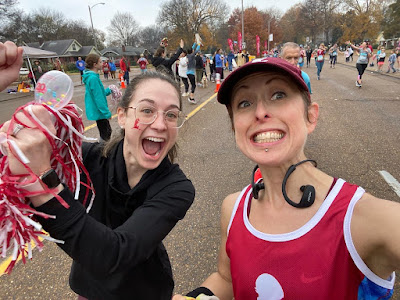 Then a few feet down the road, the Memphis Hash House Harriers were handing our beer shots. And then on Stonewall, a man handed me a shot of champagne. Beale Street Brewing made a special beer for the race, and they had samples on North Parkway. Whew! Oh, and on other parts of the course, there were whiskey shots and rum shots. It sounds kind of crazy, but these were very small shots, 1/2-ounce pours typically, so they're just enough to give you a teensy boost. What a fun time! There was so much booze that I ended up turning down a few shots.

Oh, and here's an asparagus that I met in the race. 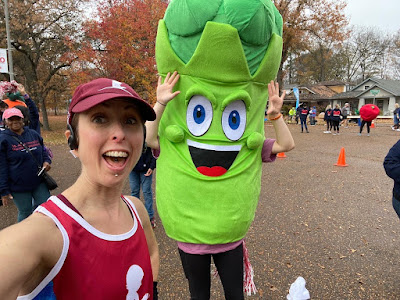 I finished in decent time. Not my fastest race and not my slowest. I wasn't going for a PR, just a party. And boy did I get a party!

After the race, I got some vegetable soup from the McAlister's booth in the post-race area at AutoZone Park (our baseball stadium), and then I headed for the beer tent to try the special Lighting In All beer that Wiseacre Brewing made just for the race. Our local breweries are so awesome! Megan finished a little after me, and we enjoyed our beers in a grassy area on the hill. The St. Jude Memphis race is always such a good one! 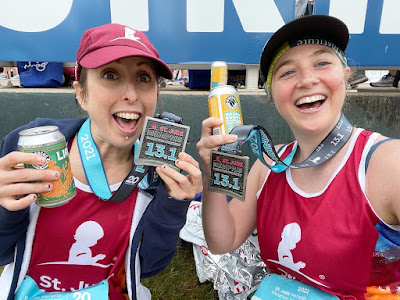 After my shower, I wanted something decadent to eat, so I went to Imagine Vegan Cafe and ordered the Appetizer Sampler with loaded potato skins, pigs in blankets, hot wings, chicken nuggets, and hush puppies. YUM!!! 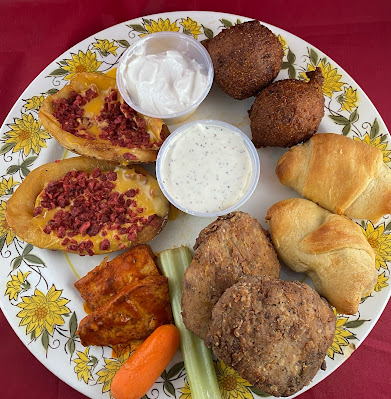 Wow, wow, wow, another race? You must have a mile-high stack of race t-shirts by now! Congratulations on your accomplishment.

You are a racing fiend! This one sounds really, really fun. I've been slacking a little on my blog commenting- I'm glad Paul is up and about and feeling better! Poor guy. From what I understand, diverticulitis is really painful.
I can't wait to hear about your next running adventure!

This sounds like a party race indeed! Glad you had fun.