I ran another 50K this past Saturday, and spoiler alert, it went great! I plan to post a race recap tomorrow when I have more time. But I've only got time for a quick post tonight, so I wanted to share a rundown of what I ate the day before my race.

I start really focusing on my nutrition two weeks prior to any long-distance race. Two weeks before, I try to just make sure I'm hydrating well and eating lots of healthy, complex carbs. And then one week before, I start focusing on limiting sugar and alcohol and getting the majority of my carbs from roots and fruits. And then the day before the race, I try to limit fiber while still maintaining a heavy carb load. Too much fiber the day before a race can cause GI issues, and that's the last thing you want out on the trail.

I started Friday morning with a blueberry-mango-banana smoothie with flax, spinach, and walnuts. It was early, and I forgot to take a picture. But I didn't add protein powder since I didn't do much of a workout Friday morning (just a 2-mile shakeout run). Later in the morning, I had this Wicked Foods Very Berry Porridge with oat flakes and barley at my desk. I'm loving the new stuff from Wicked Foods (the company from vegan chefs Chad and Derek Sarno)! I added fresh blackberries to this. 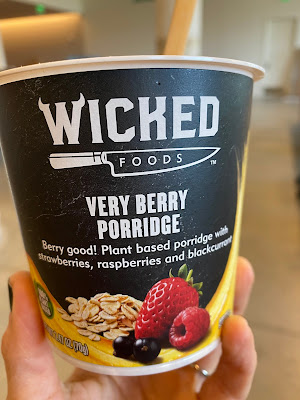 For lunch the day before a race, I almost always have an Amy's frozen burrito. This was an Amy's Bean & Cheeze Burrito with brown rice, and I topped it with a little Kite Hill queso and Tofutti sour cream. Plus, some air-fried potatoes on the side. Yay carbs! The beans provide a little fiber, but it's not like a full-on salad. These frozen burritos are just easy on my stomach, and that's what I want the day before a race. 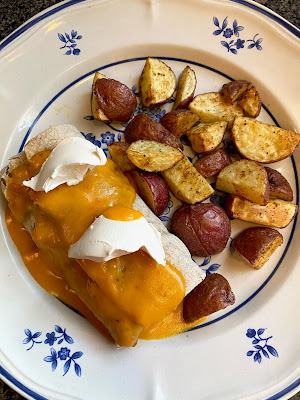 I also always try to front load a lot of electrolytes the day before a race, so I enjoyed this Harmless Harvest Coconut Water at my desk. This stuff isn't cheap, but it's fair trade and has no added sugars (many coconut waters have some added sugar). It was worth it to splurge on the good stuff for pre-race day! 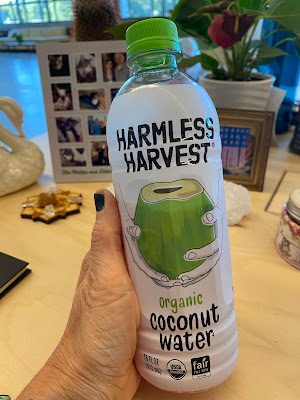 And finally, here's my standard, pre-race dinner — Whole Wheat Spaghetti with Mushrooms and Sourdough Garlic Bread! Pasta just works! I know I can eat this meal the night before a race with no GI issues, and it's loaded with carbs. Paul always enjoys my pre-long run and pre-race nights too because spaghetti night is his fave. 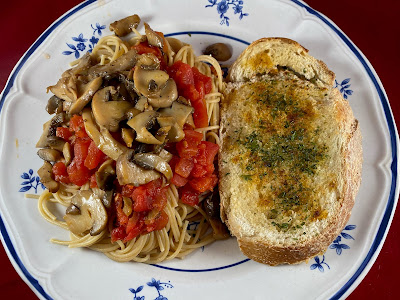 I typically have one drink the night before a race to calm the nerves. This time, it was a glass of red wine with my pasta. And then it was an early bedtime! I'll be back tomorrow with a race recap!

Bianca your diet the day before race makes so much sense. Thanks for the wisdom.