Let's be real — one of the greatest things about being vegan is being able to eat the cookie dough straight from the mixing bowl without worrying about salmonella. And let's also be honest and say that cookie dough is greater than actual cookies. Well, there's a new vegan-friendly cookie dough in town, and it's packed in an ice cream pint for maximum spoon scoopage. 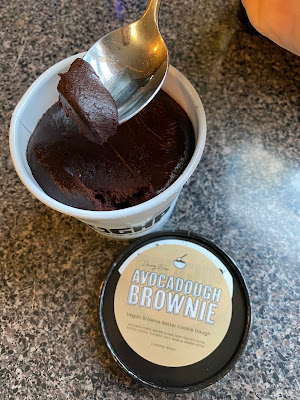 When my dough arrived (a gracious sample from the folks at Doughp!), I dug straight in with a spoon and was blown away with fudgey flavor. The avocado adds a richness without effecting the taste. It just tastes like eating the tastiest brownie batter with a spoon.

Although Doughp is designed for eating straight from the pint, you can also bake it into cookies if you feel so inclined. I decided to give that a try! The cookies come out very soft, almost like little brownie bites. 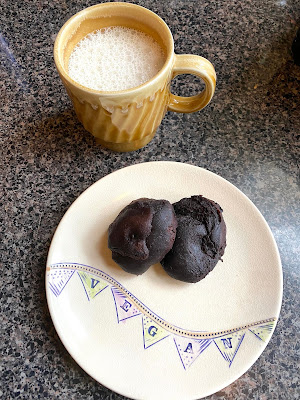 On the side of the pint, they suggest half-baking the cookies and serving them over ice cream. So I had to try that as well! I baked some more cookies for only 8 minutes instead of the 11 minutes that I baked the first batch for. They came out a little gooier, which was perfect for topping a double-scoop of Doozy Pots Coffee Gelato and Ben & Jerry's dairy-free Netflix & Chill'd. The warm cookies melted the icy cream just a bit, and it tasted like a hug in my mouth. 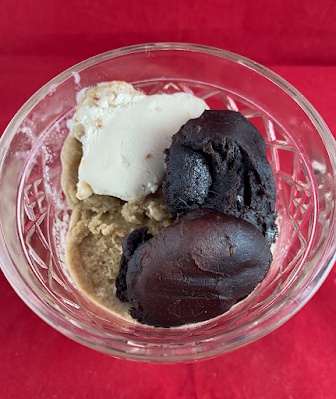 Doughp makes a bunch of other flavors, but so far, the Avocadough Brownie is the only vegan one. I hope they release more because this stuff is legit good!!

Doughp isn't just awesome cookie dough though! They also have a great mission. The founder, Kelsey, is in recovery from alcohol addiction, so they donate a portion of every sale to the SHE RECOVERS® Foundation. SHE RECOVERS is a non-profit charity with a mission to connect, support and empower women in or seeking recovery. They also offer mental health days to their staff! Very cool!

What a yummy concept?

Thanks for sharing this! I’m delighted with this information, where such important moments are captured. All the best!

Wow. This looks INSANELY good. While reading your post I had a flashback to my early days of veganism, where the choices of ice cream were- wildberry tofutti, or the other flavor of tofutti (I think it was almond bark?) Now we have so much! There's seriously no reason not to go vegan- you won't be missing a thing.