I ran my second official 50K race last Saturday (but it was my third time running the 50K distance since I did it once virtually last year!). And not only was it my second 50K race, it was my second in a month's time. I typically don't plan long races this close together, but pandemic race rescheduling has led to a bunch of long-distance stuff being bunched together for everyone! Oh well! What can do you do but run it anyway?

After my last 50K — the Stanky Creek 50K on September 18 — I took a five days off of running and then took it easy for a few days with a few short runs, and then I jumped back into the end of a 50K training plan. So I was ready to run on Saturday morning! I started my day with coffee and a pumpkin spice bagel with vegan cream cheese, and then I packed up my car for the race and headed to Shelby Farms Park.

The Big Buffalo 50K was supposed to happen in March 2020, but the pandemic hit Memphis the week before, and the race was canceled. I was super-bummed since I'd trained for months for this race, so I went out to Shelby Farms on "race day" and ran the course by myself. The race this Saturday was the rescheduled Big Buffalo 50, so it was a long time coming.

The course was a 10K loop around Shelby Farms that was part-paved, part-trail, and mostly open field. For the 50K, you had to run five loops. There was also a 50-mile race (that started at 6am) with eight loops. And there was a 50K relay, which involved teams that set up tents and basically partied while their teammates ran the 10K loop. That looked way fun, and I think I'd like to do that last year!

The worst part was the lake around the dog park section, which was angled and had high grass. It was tough to run. Here I am on that section. But at least we were in the dog park, so there were lots of cute dogs around. At one point, I saw a three-legged dog catch a ball, and I teared up. I get a little emotional when running long distances.

The best section was the mile that went through the Tour de Wolf Trail. This section was shady and lovely! But it only made up about five miles of the 31-mile course. Well, they said it was 31 miles, but my Garmin said 32.8, and most of my friends' watches said something similar.

I carried my Plant Bites (made from dried fruit) and Muir Energy Gels (made with molasses and nut butters) in my hydration pack, along with LMNT electrolyte water and a full hydropak of water. I also stashed some almond butter & dandelion jelly sandwiches in a big plastic tub near the start/finish area. You came through that area after every loop, so people sat up chairs and tents with their drop bags and any items they might need during the race. It was nice to have a home base to pass by every loop. 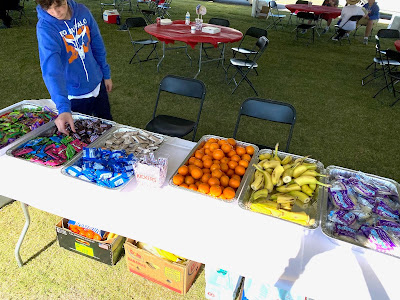 There were lots of aid stations along the course with fruit and candy. The main aid station near the start/finish had the largest selection of snacks, plus mini smoothies from Smoothie King. I grabbed one of these after every lap. The cold, sweet fruit was so hydrating on this hot, sunny day! 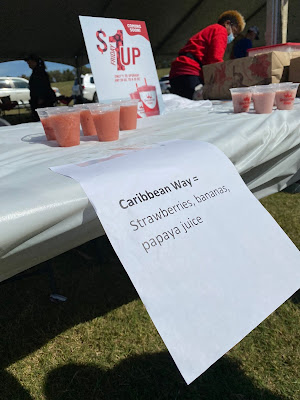 I was hoping for pickles and coke at the aid stations, but I was out of luck. My sweet snacks started to taste gross to me, and I was craving salt. I always crave salt during long runs. I did score a bag of plain potato chips at the main aid station, and that was just what I needed going into the fifth and final lap.

It felt so great to cross the finish line, and hear the announcer say "Bianca Phillips, 50k finisher!" And my time was almost a full hour faster than my last 50K time. That said, it was much flatter course and not nearly as technical. But still, I'll call it a PR! 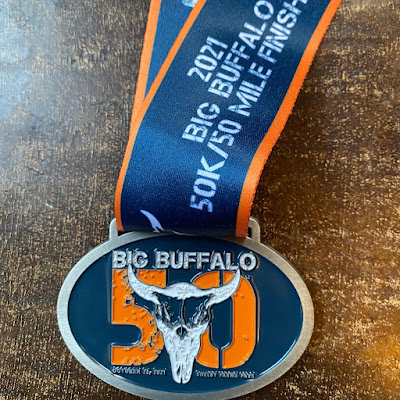 Another medal to add to my collection! Next up, I'm running the Nashville Rock & Roll Marathon on November 20! 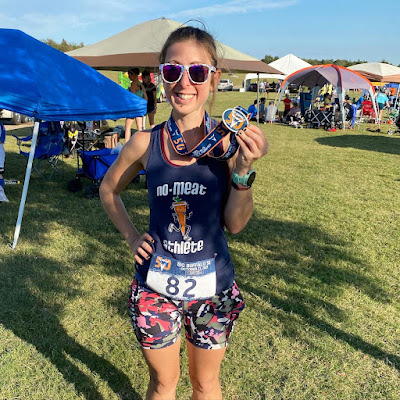 Coach Kevin from Can't Stop Endurance was near the finish line, and he offered me a beer. And then I used my free beer token from the race for another from a beer food truck. The race had several food trucks onsite, but the only vegan-friendly food truck — El Mero Taco — had to leave early, so there wasn't any food for me. But beer was fine! And I snacked on some Protein Plant Bites on the drive home.

I would love to tell you that I ate something ridiculous and decadent after the race. I really wanted to drive out to Da Guilty Vegan food truck that was parked in Midtown that day. But I just didn't have the energy, so I popped a Daiya Meatless Meat Lover's Pizza in the oven and settled into my recliner. 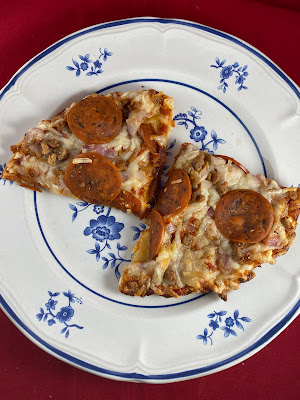 That is quite the race! AMAZING! I'm NOT a runner but totally look up to those who are! Way to go! Great job! Looked like a pretty nice day, too! Some sun! We've been getting a ton of rain lately.

Wow that is incredible that you did this race so much faster! Thanks for a great recap and I hope you were able to get your ridiculously decadent meal the next day. Can’t believe you still have a marathon to do. You are a dynamo!!!

CONGRATULATIONS BIANCA!!! A 50k finish and hour PR is huge!!! When you first described the course I was thinking that sounded hard- doing five loops. But having a home base set up with anything you might need sounds nice.
I hope your recovery is going well! And now you have a marathon in three weeks? You've turned into a running badass!