One day last week, my friend Susan dropped off a surprise at my door and texted me to freeze it asap. I wasn't home, so I texted Paul and asked him to put whatever it was in the freezer. When I got home, I was elated to see she'd packaged up four Nuggs for me to try. These new meaty vegan nuggets used to only be available online, but now they're sold at Target and Walmart. She'd picked some up and left some for me to try. I also had some Morningstar Farms vegan nuggets in the freezer, so I decided to do a taste test. 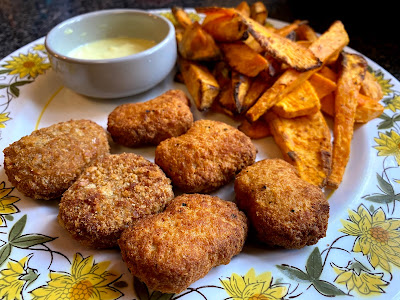 I cooked both in the air fryer, along with some sweet potato fries, for 10 minutes on 350. That was perfect for the Morningstar nuggets, but the Nuggs were a little overcooked. Still tasty though! They were just crunchier on the outside. On the inside, the Nuggs definitely had that stringy chicken texture, and they tasted the way I remember chicken tasting. The Morningstar ones taste more like vegan meat, but I love them as well. My only complaint with Nuggs is the size. They're very tiny!

I've been on a nugget thing lately, and I used some of those Morningstar ones to make a vegan Fried Chicken Salad one day. Very tasty! 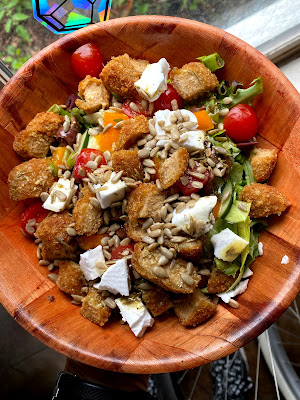 I am very loosely working on a vegan fitness cookbook that may never really see the light of day, but every once in a while, I get inspired to create something for that. Last week, I made these Tofu & Mushroom Enchiladas. 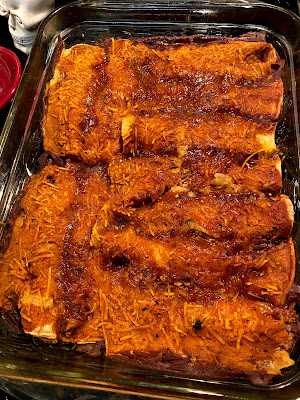 They have a homemade enchilada sauce, and the tortillas are enchiladas stuffed with seasoned tofu and sauteed mushrooms. They were REALLY good! I had some slow-cooked local collards with carrot on the side. 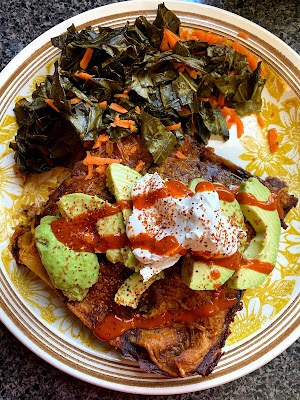 And finally, here's some Hummus Tofu Pasta Salad from the Cheap Lazy Vegan's e-book. For this, you make a homemade hummus that's oil- and tahini-free but has added tofu for protein. That hummus makes the dressing for this pasta salad with bell pepper, celery, scallion, and snap peas. 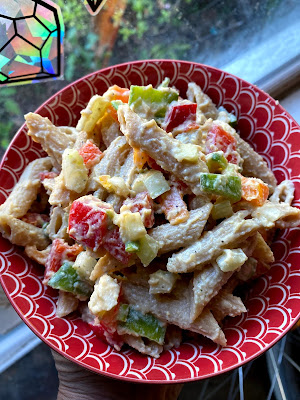 The Nuggs are tiny! I like the spicy ones the best. I did overcook some one time and they really turn into stone. It's weird that they're so hard to find!
Hummus as a pasta sauce is one of my favorite super easy dinners!

I bought a bag of spicy Nuggs recently too. They're a lot more expensive than the regular Gardein or Trader Joe's chick'n strips. I wasn't crazy about them. I finished the bag, but I doubt I'll buy them again.