I've been a little obsessed with Cheap Lazy Vegan e-books lately, mostly because the recipes are super-simple and don't call for too many ingredients. But also because there are a lot of Korean dishes in the book, and I LOVE Korean food. I recently made the Spicy Korean Udon Stir-fry, and it was so tasty. It has a base of udon noodles, which I love because they're so fat and chewy. The tofu is baked plain with no marinade, but you add it to the stir-fried veggies (bell pepper, baby corn, broccoli) and sauce (with a base of gochujang and garlic!), and you can't even tell the tofu was ever plain. 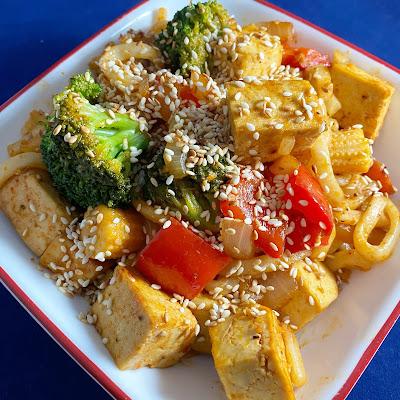 I also made the Savory Korean Scallion Pancakes for dinner one night because I got a ton of scallions in my CSA. These have a gochujang-based dipping sauce that I could drink on its own. And eating with chopsticks is fun! 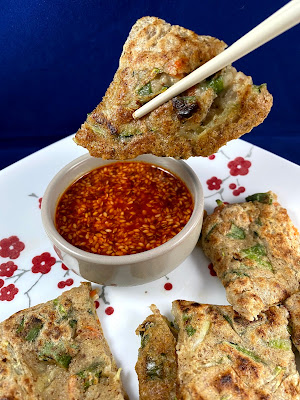 I've also been loving the Modern Love Cookzine, which I ordered at the start of the pandemic as a fundraiser to help Isa's Modern Love restaurants stay afloat in tough times. I recently made the Noochy Tofu, Mac & Shews, and the Garlicky Broccoli in Tomato Vinaigrette. 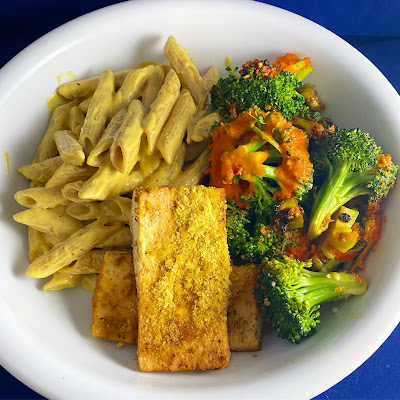 Mac & Shews (as in cashews) is what Modern Love is probably best-known for. I've never been, but the Brooklyn location is on my bucket list! This isn't the exact recipe from the restaurant, but Isa says it's an easy make-at-home version. It has a cashew and roasted red pepper base. The tofu is just coated with tamari and nooch before baking, and the broccoli is seared and covered in a really yummy fresh tomato/garlic vinaigrette. I've been using the leftover vinaigrette on salads.

Have y'all tried Brave Robot yet? I read about it in VegNews and then found it on sale at Kroger. It's a new vegan ice cream that's made with a base of non-animal whey protein (basically, lab-grown milk protein). They create the protein in a way that doesn't even require an animal! They just insert "a cow’s DNA sequence as a blueprint into yeast-based microflora," according to VegNews. WHOA! I love science food, so I was excited to try this! 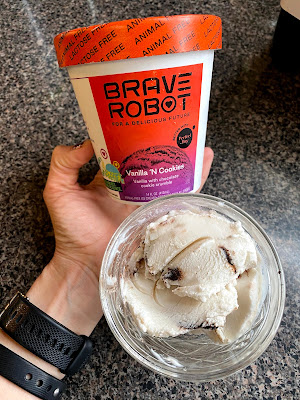 My thoughts: It's good. It's creamy. It reminds me of dairy ice cream, which I haven't had in 17 years, so I really don't remember it that well. But honestly, I think I prefer the taste and texture of oatmilk ice cream. I'd buy this again, but oat is my fave. Note: This is not appropriate for lactose-intolerant people because the synthetic milk protein contains lactose.

And finally, look at this party food! Parties are back! My friend Jen celebrated her birthday last weekend with a small outdoor gathering, and she made lots of snacks. My friends and I gathered outdoors a few times during the pandemic, but now that we're all vaccinated, this felt so much safer! Jen's Mexican Layer Dip and Onion Dip were my faves! 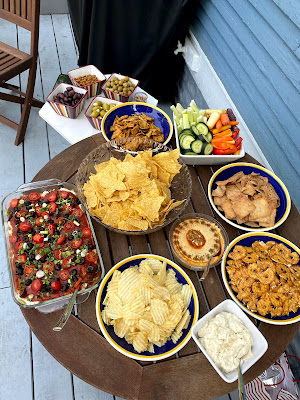 I've never heard of that ice cream! So is it the same idea as lab-grown (or "cultured") meat? Definitely intriguing, but almost seems unnecessary with all the other amazing vegan ice cream options nowadays.

I love Korean food so much too! I love to bake tofu before adding it to saucy things, it seems to soak up more flavor than raw!

Thank you for reminding me about the Modern Love Cookzine!