Over the weekend, I made the One Pot Pasta from The No Meat Athlete Cookbook as a night-before-my-long-run carby dish. That said, my long run only ended up being six miles because there was still a ton of ice on the sidewalks and in the bikes lanes in Memphis on Sunday, so running was a challenge. But making this pasta was not a challenge! Ha! You literally throw everything — pasta, tomatoes, bell pepper, kale, onion, garlic, herbs — into one pot, and dinner is ready. I had some extra almond ricotta left from my Valentine's Day meal, so I topped the pasta with that and kalamata olives. 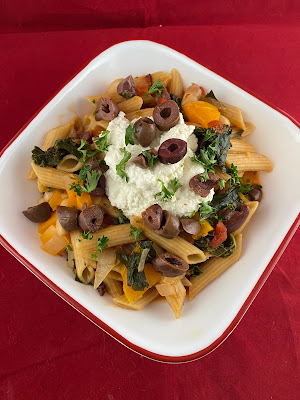 I also had some leftover Beyond Pepper Steaks left from our pre-Valentine's dinner, so I had one of those earlier this week with some mushroom gravy, steamed potatoes, and green beans (from a can — Paul only likes canned green beans, and he left half a can uneaten). 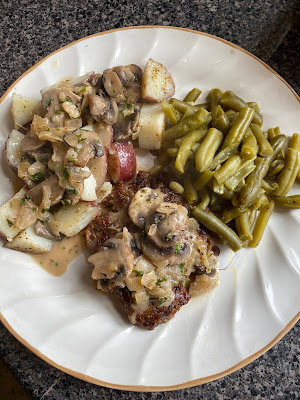 I made the Basic Dahl from the No Meat Athlete Cookbook last week too! I'm on a mission to make everything from this book, and I'm getting close. I've made this one before, but it's so good that I had to make it again. It has yellow toor dahl with brown rice cooked together, and it's very easy on the tummy. There was still snow on the ground that night, so I put everything in the Instant Pot, headed out for a short snowy run, and came home to a warm meal. 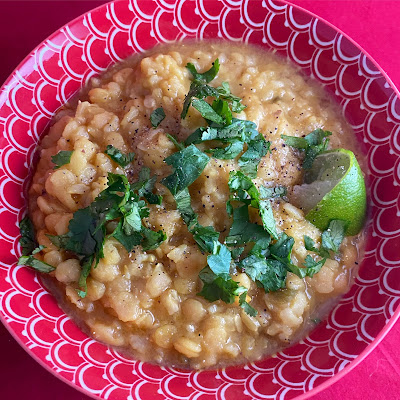 And finally, here's a quick lunch from yesterday. I had some leftover Chipotle Chickpea Chili (from Cookin' Crunk) in the freezer and some sweet potatoes in the pantry. Plus, I had some kale left after making that pasta dish. So I baked the potato and topped with the chili, and I sauteed the kale in some sesame oil and sesame seed. Topped the kale with leftover tahini sauce. 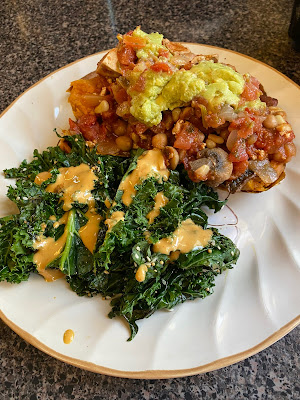 Ever since covid I've been making myself take walks every day, and when it snows it's so hard. So many people here don't shovel and it makes the sidewalks so scary!!
Dal is one of my favorite warming comfort meals!!
I'm with Paul, I only like canned green beans, but I'm even pickier, they have to be French cut!!!