Most years, I make a vegan king cake for Fat Tuesday and share it with my coworkers, but almost a year into the pandemic, I'm still working from home. I could eat an entire king cake on my own, but that's a lot of cake! I decided to order King Cake Donuts from Darling Donuts this year instead, but then the great Snowpocalypse of 2021 happened. When last Tuesday rolled around, Memphis was under a thick blanket of ice covered by a thicker blanket of snow, so Lily of Darling Donuts wasn't able to deliver orders. She promised fresh donuts would be delivered as soon as the roads were safe, and that day ended up being Sunday! Yesterday, I woke up to a text from her that said "Your donuts have been delivered!" What a great wake-up call! 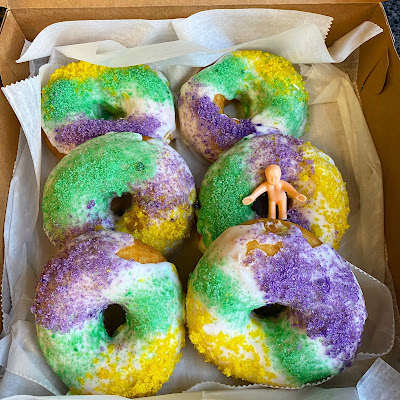 Sure enough, this box was on my porch. Happy Fat Sunday! And Fat Monday because I'm still eating donuts. I froze a couple for later too. Donuts freeze exceptionally well. Thankfully, Memphis is no longer frozen. The snow is melting, and it's going to be 65 on Tuesday.

I'm still on a tofu scramble kick for breakfasts, so here's one from last week. Made using my recipe from Cookin' Crunk (my secret ingredient is celery salt). I never measure the spices, and I used a bit too much turmeric in this batch but still tasty. 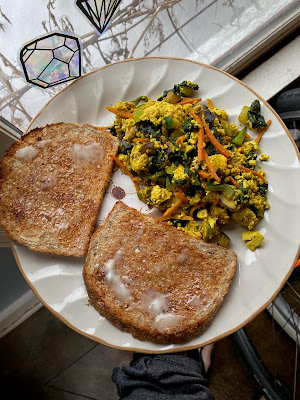 Today, I tried a new-to-me scramble recipe from the 4-Week Vegan Meal Plan e-book by My Darling Vegan (one of the e-books I got in the No Meat Athlete Health & Fitness Bundle). This one has no turmeric or any spices except lots of nooch, salt, and pepper. And onion, garlic, and lemon juice! I really liked it, and I'll be making this one again. 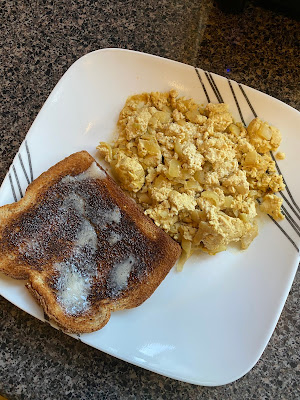 Memphis is under a boil water advisory after the winter weather caused breaks in the main water lines, so I'm using that as an excuse to drink more beer! This weekend, I finally cracked open this bottle of Crosstown Brewing Co. Sarratavia Blackberry Wheat Wine beer. The image on the bottle is of Midtown Crosstown Grill, which closed during the pandemic. RIP, MTC! If you look closely, you can see the actual Midtown Crossing building in the background. I really miss my neighborhood bar/vegan-friendly pizza joint. 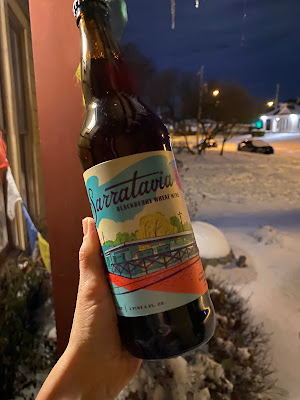 This beer was aged in red wine barrels, and it was 8% ABV. I'd been holding onto it for a special occasion, and being snowed in seemed pretty special.

Can you recommend an easy King Cake recipe? Thanks. Your blogs make me so hungry.

Hi Anonymous! Unfortunately, the recipe I use isn't online anywhere anymore. It's by Kittee Kake, who used to run an awesome blog! She's taken the blog down, but I'd printed off the recipes years ago. There's also a pretty decent version in Isa Chandra Moskowitz's The Superfun Times Vegan Holiday Cookbook.

Aww, I always love seeing your king cake, and seeing who found the baby!
But those doughnuts are gorgeous!!!
I need to make tofu scramble, it's been way too long!!!