Still catching up on some older food pics from the past few weeks. About three weekends ago, I picked up some of LuLu's amazing Coffee Cake to enjoy for a Saturday breakfast. I had this before my run, which was a little decadent for pre-run but worth it! 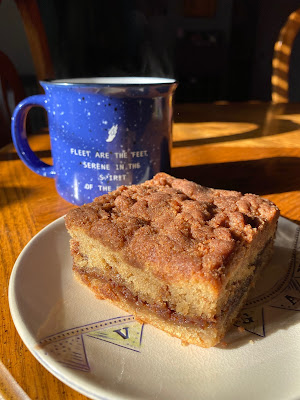 Still eating Overnight Oats several days a week for breakfast. For this bowl, I stirred in some canned pumpkin that I had leftover from another recipe. It's topped with my homemade soy yogurt and some homemade peanut butter-tahini granola. 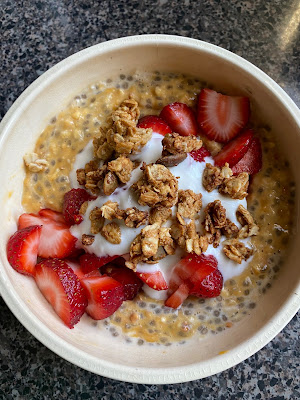 Here's a random quick weeknight dinner with brown rice, frozen broccoli, air-fried frozen tofu (that combo makes for some fun texture), tahini sauce, and toasted sesame seeds. Meals like this are my go-to when the groceries get low. 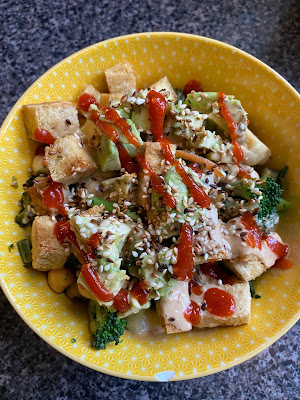 Any time I'm planning a visit to see my parents, I self-isolate for two weeks before the visit. And that even means no takeout! It's also a chance for me to save money and eat a little healthier. During my last quarantine, I was craving Imagine Vegan Cafe's Southern Staple Bowl, so I made a version at home! This has brown rice, 16-bean mix, collards, and garlic aioli (made by mixing Vegenaise with a little fresh garlic), plus pickled okra and cornbread on the side. I made a big batch of my Jalapeno-Corn Cornbread from Cookin' Crunk a couple weeks ago and froze some in individual portions for meals like this. 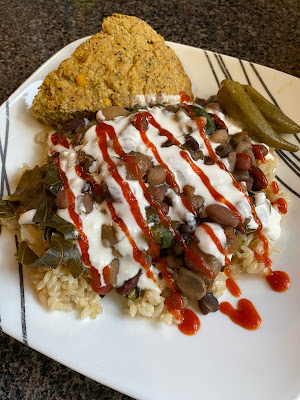 And finally, here's a film recommendation! A few weeks ago, I heard an interview with The Invisible Vegan's Jasmine C. Leyva on The Whistler Vegan Fest Podcast. The Invisible Vegan sounded awesome, so I watched it later that night on Amazon Prime. The film looks at plant-based eating’s historic roots in Black culture, the intersectionality of animal liberation and Black liberation, environmental racism around factory farming, and so much more. Check it out on Amazon Prime! 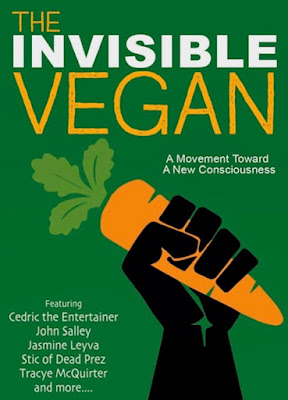