I've considered myself to be a whole foods, plant-based vegan for the past several years. Before that, I was a proud junk food vegan! Now I'll definitely still indulge in some Beyond Burgers or Gardein meats. I'll eat every vegan donut that comes my way, and when I dine out, all healthy bets are off. But I try to center my meals around whole foods most of the time.

Except when it comes to running. I tend to fuel pre-run with white bread bagels and fuel mid-run with sugary gels and gummies. I'm not giving up my bagels! But I've long wished for a healthier alternative to endurance fuel. Eating a sugary gel every 45 minutes gets old. And gross. But simple, fast-acting carbs are crucial when you're out on a long run. Dates and bananas work, but dates also get gross after a few. And try carrying bananas on your run! 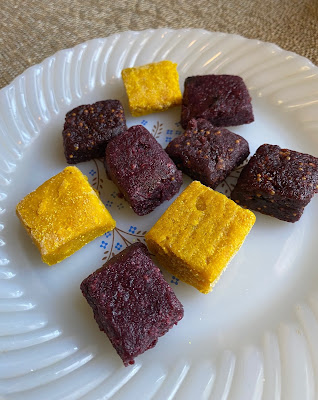 They sent me samples to taste test. Above are Mango + Banana, Fig + Triple Berry, and Date + Cherry. They only planned to release two of the three flavors, and after the test samples went out, they chose Mango + Banana and Triple Berry + Fig. Sadly, the Date + Cherry didn't make the cut, but I hope these bites are super-successful and they end up adding that flavor. I really liked that one! 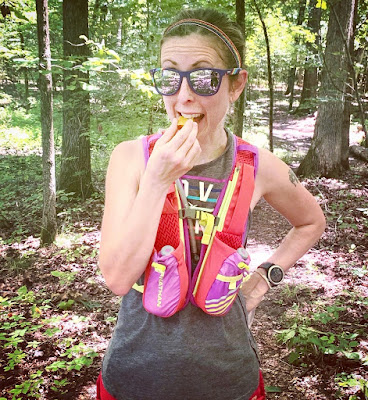 I tried all three flavors out on an 8-miler at Herb Parson Lake in Piperton, TN (about a 40-minute drive from where I live in Memphis).

Mid-way through the trail run, I had one of each bites since three bites makes one serving. That's equal to about one gel or a one serving of gummies (3-5 depending on the brand). 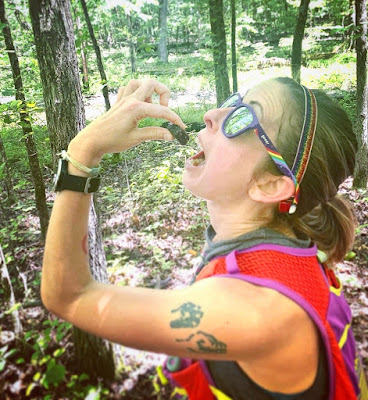 You store these in the fridge or freezer, and even though they're soft, they keep their shape when wrapped up in your pocket. I stored mine (wrapped in plastic wrap) in the front pocket of my hydration pack. But they could also be stored in a shorts pocket.

After eating the bites, I felt that same revived feeling I get after having a gel or gummies but without the yucky, sugary mouthfeel. Gels are especially revolting! I like the flavor of gummies, but they tend to stick to your teeth. Plus, it just seems antithetical to fuel your healthy activity with candy. I love these Plant Bites snacks!

I have tried some gels in my day (not for running, but immediately pre-Bikram yoga for some energy without making my tummy uncomfortably full), and I agree with you that they are not great.

A nice little bite sounds much better! I am sad to hear they didn't go with Cherry and Date, that sounds amazing!