If you've been reading this blog for very long, you might know I'm a bit obsessed with the No Meat Athlete podcast. They recently did an episode on what hosts Doug Hay and Julia Murray (the vegan, two-time Olympian blogger at Hooked on Plants) eat in a day, and I was so inspired that I decided to change my breakfast routine. For months, I'd been refueling immediately after my runs with white rice. And then an hour or so later, I'd have a protein smoothie.

But Julia mentioned that she liked to make a big smoothie after her run, drink part of it right away for post-run carbs, and then sip on the rest as a morning snack. For her breakfast, she made overnight oats and topped them with vegan yogurt, fruit, and granola. I love a change in routine every once in awhile, so I've been doing that for a week or so now. It's nice having a sit-down breakfast, and I enjoy the smoothie for my snack.

On that podcast, Julia shared her recipe for granola (just mix oats, peanut butter, tahini, maple, pumpkin seeds, and raisins and bake on 325 for about 20 minutes). I made some of that and got some Kite Hill unsweetened almond yogurt for a topping. 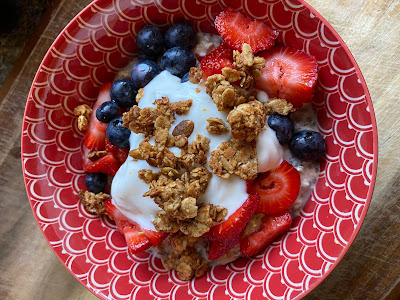 The next day, I had the same oats, yogurt, and granola, but I topped with nectarines and blueberries! 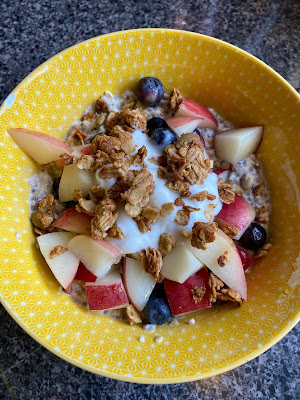 And here's another bowl with bananas and blueberries. 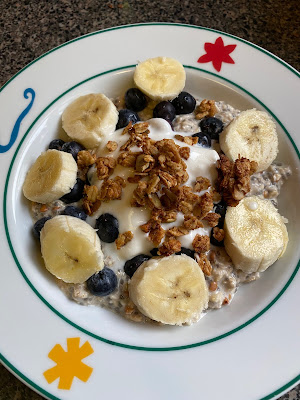 Those were all really good, but my favorite combo was this morning's bowl. I skipped my smoothie, so I mixed Complement protein powder, plus some pumpkin puree, into my overnight oats. That's topped with cherries and cacao coconut nut butter (that I'll be reviewing soon!). 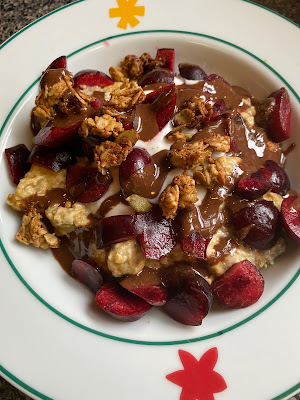 As for smoothies, most days those are my basic combo of bananas, berries, walnuts, flax seed, and spinach. Sometimes, I add mango or peaches. But one day last week, my power went out right after I woke up. And that meant no Vitamix! I decided to get my run in by Juice Bar in Cooper-Young, so I could stop in for a post-run smoothie/morning snack. Y'all, I don't even want to tell you how much I spent on this Matcha Green Smoothie, but it was too much!! I added vegan protein powder, and after the add-on cost and tip, well, let's just say I could have bought a meal for two for the cost of this one smoothie. Eeeek! 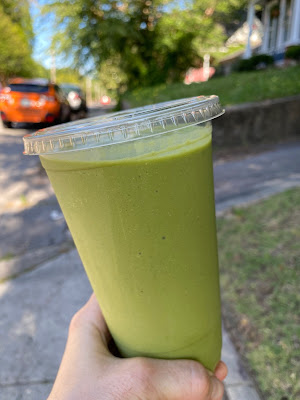 Fortunately, the power came on by late morning. There was some kind of electrical damage in my neighborhood. No storm or anything! The next day, I made a MUCH cheaper smoothie (pear, banana, ginger, spinach, flax, Complement protein), and I added a fancy Sugared Hempseed Rim (recipe from the No Meat Athlete Cookbook). 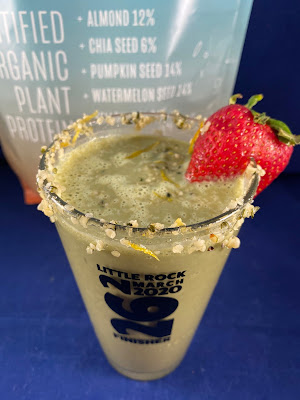 So far, I'm loving this new breakfast routine! I'm currently doing a run streak (when you commit to running at least one mile every single day), so there are no non-running days, but on my "rest days" (when I'm only doing that one mile), I tend to go for a different kind of breakfast, like a brekky sandwich or savory oats. But this smoothie and overnight oats routine is perfect for training days!
Posted by Bianca at 9:00 PM

loving to see new combos. i'm still obsessed with morning oatmeal but might do some changes to that, like topping with granola. :)

Those breakfasts look DELICIOUS... I'm gonna have to try making that granola recipe myself.
As for the smoothie incident, I accidently bought a $12 juice once, so I feel your pain!