For the third consecutive year, I entered a vegan gumbo in the Tennessee Equality Project Mardi Gras Party & Gumbo Contest! TEP is the statewide lobbying group that fights for pro-LGBT equality legislation and against anti-gay bills. The gumbo event, which raises money for TEP, was this past Sunday. I made a new sign this year! 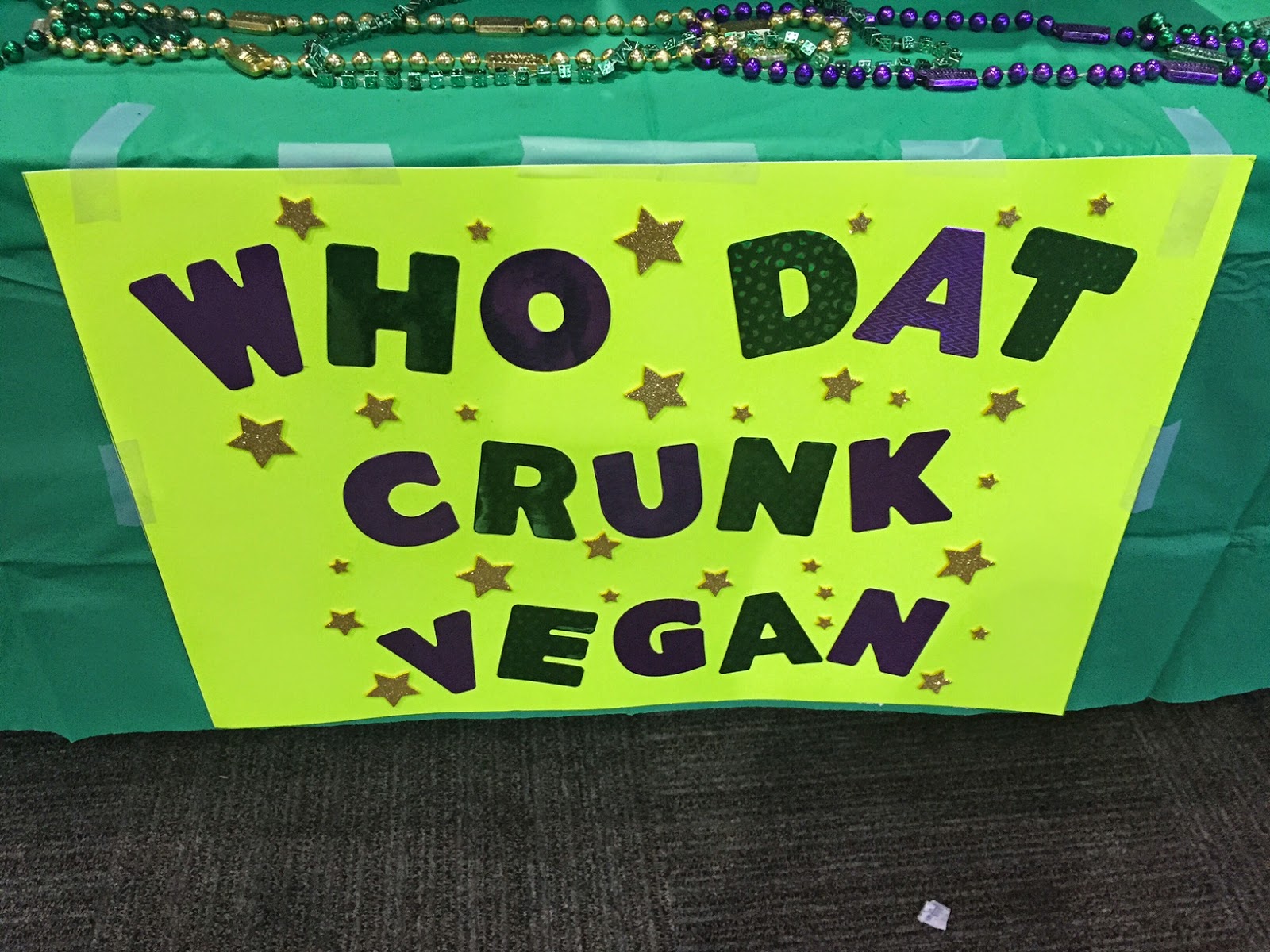 My friend Greg and I were on a gumbo team together, even though I did all the cooking. But Greg helped unload stuff, and he helped dole out the rice. And he manned the table all by himself when I made beer and bathroom runs. 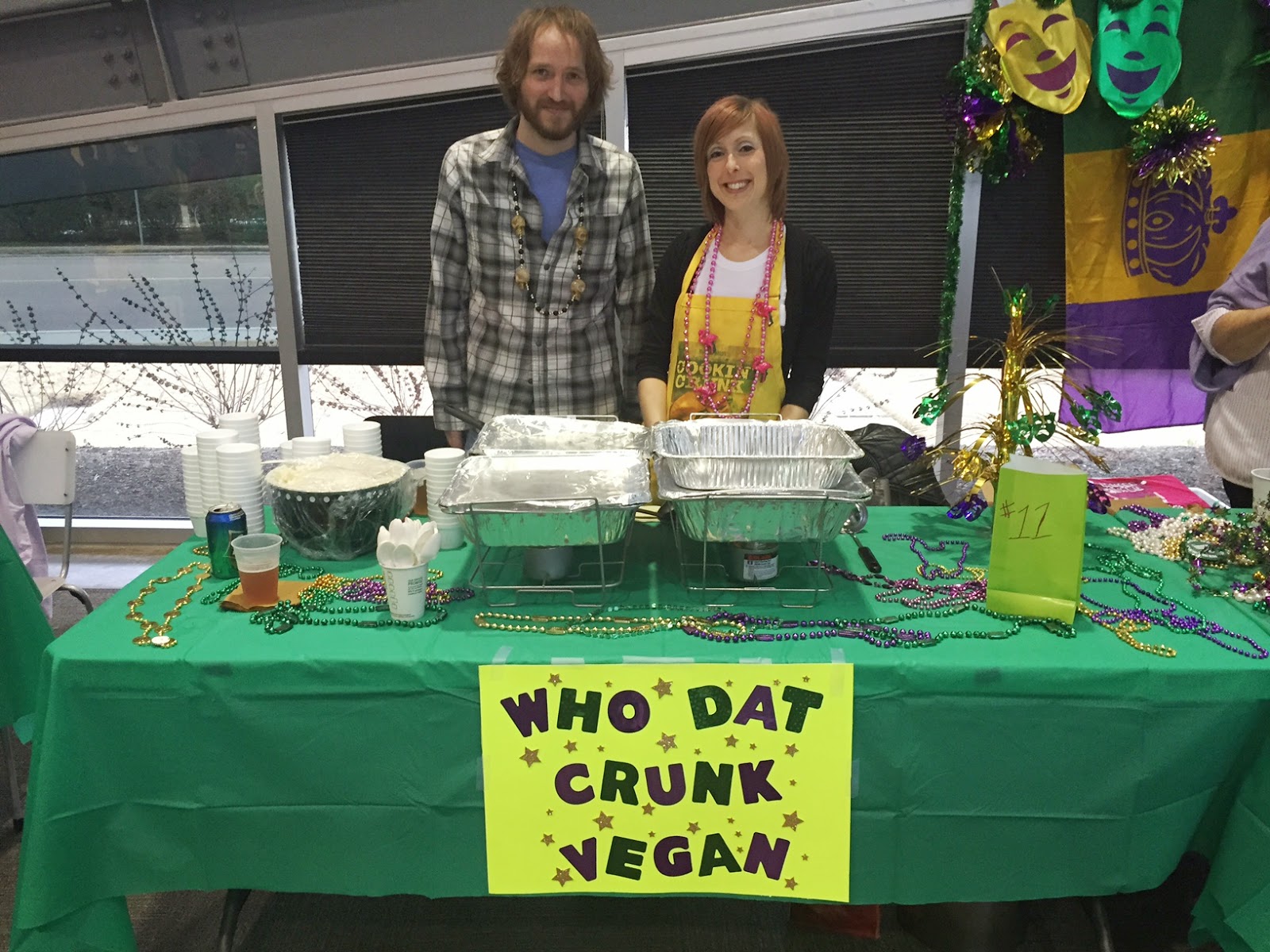 The event isn't a vegan one. In fact, I've had the only vegan gumbo entered every year that I've been there. Each year, I make a different recipe, and this year, I went with the Okra Gumbo with Chickpeas and Kidney Beans from the Post Punk Kitchen. 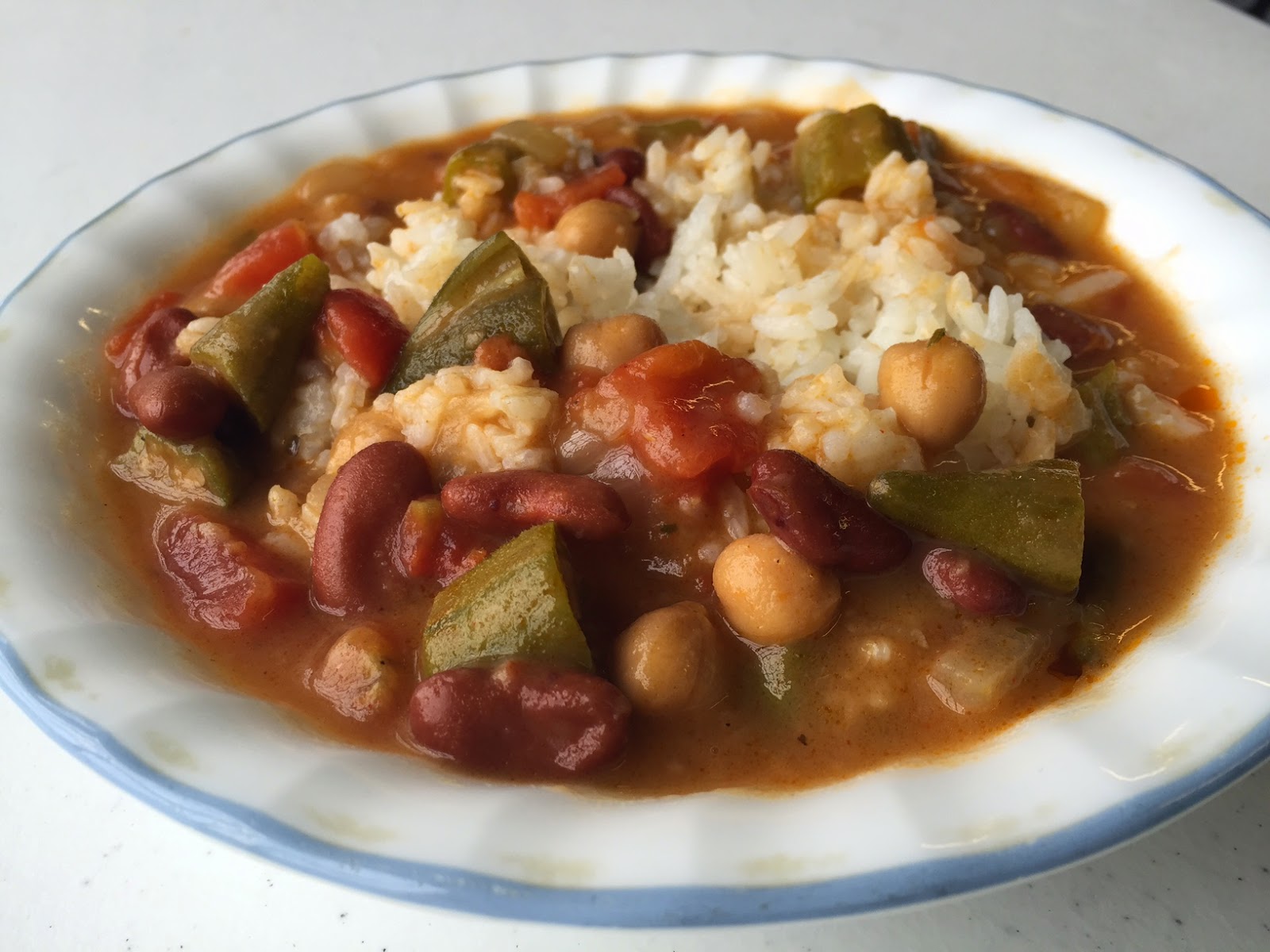 It's an Isa recipe, so of course it went over super-well! I didn't count, but I'm almost certain I got more People's Choice Award votes this year than I ever have. We still didn't place in the judge's awards or People's Choice Awards, but I'm thinking that a bean gumbo may be the way to go when feeding omnis.

In my first year, I made the Tempeh Gumbo from Cookin' Crunk, and people liked it. But I had explain what tempeh was, and I think it freaked some people out a little. Last year, I made Bryant Terry's Gumbo Z'herbes from Vegan Soul Kitchen, but I added some sliced, homemade seitan sausage. And a few people said that, even though they liked it, they'd rather not have "fake meat." Now, I tried to explain that seitan isn't fake and that my sausages were homemade from real ingredients. But sigh ... some people just didn't get it.

But everyone understands beans! The not-using-weird-vegan-ingredients approach might be the best one! Also, we noticed that more people approached our booth this year who were either vegan, vegetarian, pescatarian, or allergic to shellfish. For some at the event, we had the only gumbo they could eat!

The event is so festive and fun! There was a New Orleans-style jazz bands, lots of beads, and Mardi Gras colors everywhere. Just look at my friend Nathan! 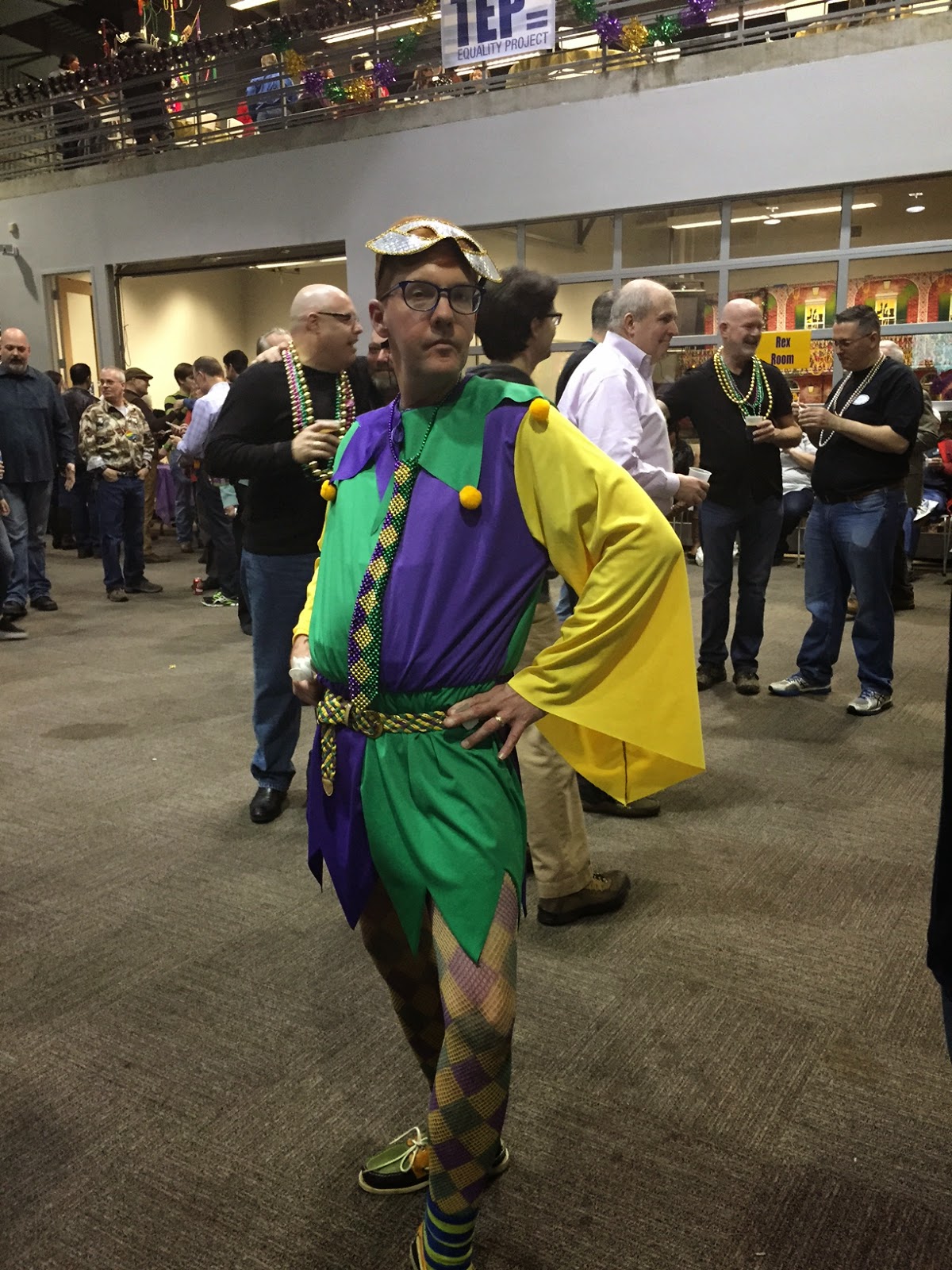 I haven't made gumbo in forever. Yum! I need to get some going before FT!
xo
kittee

Good for you! So glad you are representing the veggies!
I worked at one of the New Orleans restaurants at Disneyland years ago, and I wanted a gumbo recipe that was as close to it as I could find. Feel free to try it! It's my go-to now. I've even served it at family gatherings :-)

1/2 cup cooking oil [I use olive oil]
1/2 cup flour
2 onions, chopped
2 bell peppers, chopped
2 stalks celery, chopped
3 cloves garlic, minced
2 qts chicken-flavored vegetable stock
1 lb fresh okra, chopped, or use frozen if fresh is not available
1 15 oz can tomatoes, chopped
3 bay leaves
2 teaspoons dried thyme
1 teaspoon black pepper
cayenne, to taste
1 lb. vegetarian sausage, cut into 1/2 inch slices, or tempeh, cubed (I use Tofurkey Italian sausages)
salt, to taste
Gumbo file powder
Tabasco sauce
Hot cooked rice
Instructions
Make Roux: Combine oil and flour in heavy frying pan (preferably cast iron) or stock pot. Cook over medium heat, stirring constantly with wooden spoon or wire whisk, until it reaches a nut brown color. BE CAREFUL NOT TO LET IT BURN! If black flecks appear, the roux is burned, and you must start over. It should take about 20 to 25 minutes to achieve the desired color. (See How to Make a Roux)
Just before roux is desired color, add chopped onion, bell pepper, celery, and garlic, and continue stirring until vegetables have been coated with the roux and are beginning to soften. If using the same pot to make gumbo, add stock directly to the pan. Otherwise, let roux cool until it is safe to handle, and add to large stock pot with the stock. Add the okra, the tomatoes, the bay leaves, and the dried spices, except for the salt. Let simmer for 30 minutes, then add vegetarian sausage. Let simmer another 10 minutes, and add salt. Check for seasonings, and adjust if necessary.
Remove from heat, and serve over mounds of hot rice. (To mound rice, use an ice cream scoop.) Sprinkle with file powder if desired and Tabasco sauce.