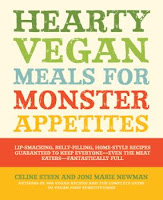 Just days before I was set to start my 21-day Crazy Sexy Diet last month, Joni Newman sent me an email asking if I'd review her and Celine Steen's latest tome — Hearty Meals for Monster Appetites. Of course I would!! But sadly, the cleanse meant waiting three weeks before I could crack it open. After all, the cleanse was about eating smaller meals, not monster ones.

But I knew, as soon as the cleanse was over, I'd be looking for a monster meal in a big way. And boy have I?! I feel like Celine and Joni wrote this book just for me! It's packed with everything I love to eat — five-cheese baked vegan macaroni, a patty melt, fried mac & cheese balls, tator tot casserole, vegan "Haute Pockets,"and maple bacon-freakin'-donuts. I love all of Celine and Joni's work (500 Vegan Recipes, The Complete Guide to Vegan Food Substitutions, Joni's blog Just the Food, and Celine's Have Cake, Will Travel), but this book takes the banana cream pie cake (yep, that recipe is included in there too).

I plan to cook several dishes from this book over the next few days, but I started with this Waldorf Salad Wrap: 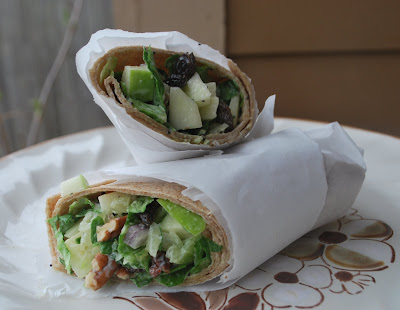 Granted, this isn't the most sinful recipe in the book, but it just sounded really tasty. Romaine, green apples, celery, red onion, pecans, and raisins are mixed with a creamy homemade poppyseed dressing. Not only was the wrap delicious, but I also learned the proper way to roll a super-stuffed, deli-style wrap without making a mess. It's all about the parchment paper, y'all!

On the side, I made my Almond-Miso Soup, a recipe I've been making for ages: 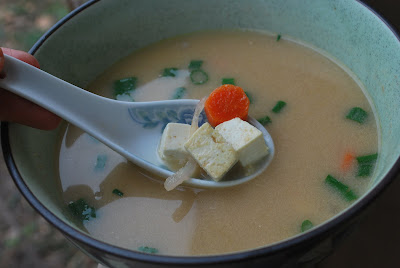 I'd post it here, but I'm saving it for an upcoming piece I'm writing for VegNews.com. So I'll be sure and link to the recipe as soon as it goes up their site.

As for Hearty Meals, expect to see several more posts about this book in the coming days. On my to-make-from-the-book wish list: PB & OM Muffins with Ricemallow Cream, Broccotato Soup with Bacon Chickpeas, BBQ Slaw Tacos, Crispy Pepperoni Bites, Garlic Truffle Fries, and Celine and Joni's best gift to the vegan world, the Double Take (a veganized version of KFC's "Double Down" sandwich featuring chicken as bread).
Posted by Bianca at 11:25 PM

This book sounds like a must-own, everything you listed sounds great.

I LOVE the 5-cheese baked mac & cheese and it's been a huge success at potlucks with omnis. I made the Haute Pockets too, they were surprisingly easy and the leftover sausages were tasty by themselves. I love this book too. I pre-ordered it on Amazon without even knowing what would be in it because the title seemed like it was just for me!

Wow, the recipes you mentioned sound so good, I can't wait to see how they turn out! The salad wrap looks so fresh and delicious and your soup looks really yummy as well! Definitely looking forward to hearing more about this cookbook!

Ooh, I was totally going to make some recipes from this book, too! Logan got it for me recently, probably as a "hint hint" to make more crazy comfort food. :) Oh, and I've made the broccotato soup before, and it's wonderful. It's one of the few recipes I've repeated. And yeah, Joni and Celine are great, I have several of their books, and the photos are gorgeous!

This book sounds great! I know my husband would definitely appreciate me making him things out of this..and would get him to eat more vegan food! (It gets kind of hard to put a salad in front of him all the time and say "dinners served!" lol) The wrap you made though sounds light and delicious! anything with apples is always a good choice...

Sounds like a good one to use for carnivores!

This book is on my wishlist! I also can't wait to review YOUR book :)

Veganized 'Double Down'?! That is awesome. Can't wait for that one. That wrap looks and sounds positively delicious.