So there's only two hours of Valentine's Day left, but hope you had a happy one. Since my co-workers at the Memphis Flyer and Memphis Magazine were my first Valentines of the day, I brought them some Strawberry Cupcakes from the 2012 Happy Herbivore calendar: 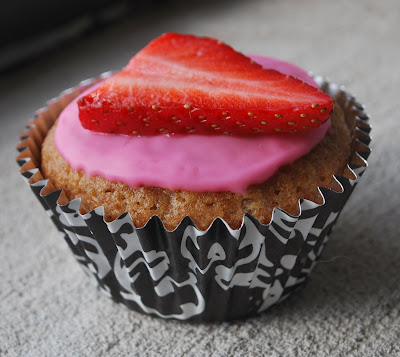 These whole wheat cupcakes are made without oil, like all of Lindsay Nixon's low-fat recipes. They've been staring out at me on my February calendar all month, and V-Day seemed like the perfect excuse to make them.

One thing to note if you have this calendar and want to make these cupcakes: There's a typo in the recipe on the calendar. It should include 1/4 cup of applesauce, according to Lindsay's original recipe in Happy Herbivore. Fortunately, I just happened to check out the recipe before making these.
Posted by Bianca at 9:50 PM

What a cute cupcake and a perfect Valentine's Day treat! I bet your coworkers were so happy to eat them :) I also really love the liners you used!

I was planning to make my colleagues some blueberry muffins, but I caught some powerful lazy.

Very pretty. I love sharing goodies with the co-workers. Then they can't fire me.

they are so pretty and dainty! i always loved pink frosting on cupcakes ;)

I've made these using strawberry puree instead of applesauce...deeeelicious.