Even though Memphis is a good 6-hour drive from New Orleans, some folks around here embrace Fat Tuesday like it's our own. We have a tiny downtown Mardi Gras parade. But even though we don't have quite the crazy Mardi Gras scene, beads and King Cakes are everywhere in Memphis on the day before Lent.

Every year, I bring a vegan King Cake to work, and I always make the same recipe from Kittee Berns. It's a recipe I tested for her years ago before she went gluten-free. 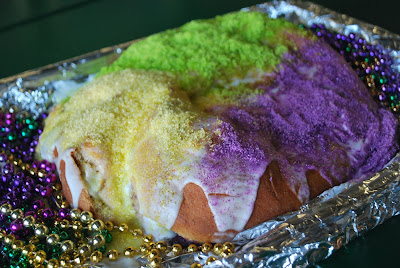 I've tried cinnamon-praline filling and cherry filling in year's past, but this year, I opted for a Blueberry-Cream Cheese Filling. I used Kittee's vegan cream cheese filling recipe and a can of blueberry pie filling. This was my favorite filling so far: 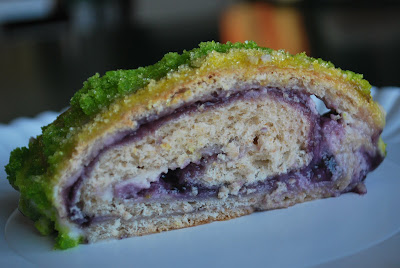 As for the colored sugar, I already had some yellow sugar that was marked down at Target last Easter. But I dyed my purple and green sugar with a little food coloring.

And I finally found plastic babies! In year's past, I've stuffed a bean into the cake in lieu of a plastic baby. But I tracked down the cute little boogers in a cake shop on Summer Avenue. My co-worker Mark found the baby in his slice, and that means he's supposed to bring the cake next year. But I'm not holding my breath for that. I'm sure I'll be making it again. Here's the little baby all covered in blueberry guts: 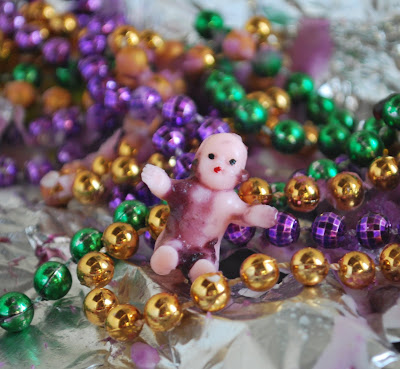 Let the good times roll, folks! I'm off to enjoy an Abita in the last few hours of Fat Tuesday.
Posted by Bianca at 9:35 PM

Yuuuuuuuuuum! It looks beautiful and delicious and that blueberry filling sounds SOOOOO good! I've never had a king cake but I feel like I should change that.

Oh, the blueberry filling looks fab! I did cinnamon sugar with the cream cheeze (again). It's just so good!

i always wanted to make a king cake for mardi gras, but have never done so..this looks INCREDIBLE!!

I'm always so jealous of your co-workers on Mardi Gras! I want one of your king cakes! haha! I've never made one....I should have given it a try this year. Your blueberry cream cheeze filling sounds amazing!

Fat tuesday, eh? I must be way too many miles away from New Orleans to know what that is. :) But any occasion for a cake is a good one!

That looks t-riffic!!!! I haven't had any King Cake this season- booo!

Aww, I always look forward to your king cake posts! That little plastic baby's a cutie.

Looks great! I wish I had a can of blueberry filling in my pantry (I have frozen wild blueberries, but I don't feel like cooking them up into a filling)...

Oh well! And I JUST came from TJ's!

This looks delicious! There's nothing like a little plastic baby to brighten your day!

I've never had the desire to have king cake, but your post is changing my mind.

That looks divine. I never had King Cake before. YUM!

I've never had King Cake. I love the tradition though; it's so cute!

That looks AWESOME!! I love a good, festive cake! I wish Memphis was closer to Tucson - I'd stop by and have a slice!