Not Your Mama's Pot Roast

On Sunday night, I did something that little old ladies have been doing on Sunday nights for years. I made a pot roast! But this was not your grandma's pot roast. In fact, it was the Not Your Mama's Pot Roast with Roasted Vegetables from Vegan Diner: 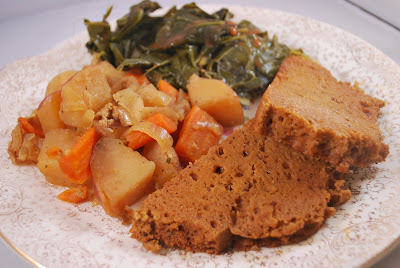 This seitan roast is slow-simmered along with red potatoes, carrots, and onions in a Crock-Pot of flavorful broth for hours. I haven't had pot roast in at least 17 years, and although I don't remember exactly what roast tastes like, I think this was pretty spot-on.

I always make seitan from scratch, and I've tried many, many recipes ... all of them delicious. But this one may be the most flavorful. The recipe did come from Julie Hasson, after all. She's the woman who gave us the steamed sausage. Of course, her seitan pot roast would be fabulous! 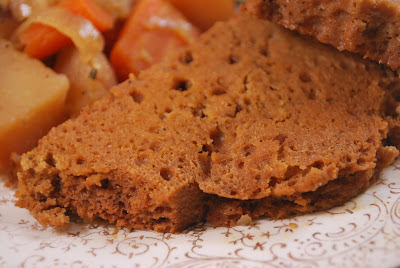 The tender, juicy roast is seasoned with Marmite and porcini mushroom powder, which I almost left out because it sounded too expensive. But thankfully, Whole Foods had dried porcinis in the bulk bins, so I was able to just get a small amount and grind them down into a powder using my mortar and pestle.

On the side are the veggies from the Crock-Pot, which were also bursting with slow-roasted flavor, and my own recipe for smoky collard greens (it'll be in my cookbook). This was the perfect Sunday meal, even though I cooked it too late on Sunday night and didn't get to try it until Monday night.

This is the first recipe I've made from Vegan Diner, a Xmas gift from my BFF Sheridan. But everything looks so amazing. The Grilled Cheezy Sandwiches with Homemade Great Smoky Mountain Cheeze, the Blue Plate Special (waffles 'n' gravy with potato scramble!), the Brown Rice Hazelnut Burgers, the Beer-Battered Onion Rings, and the Vampire Fries (garlic fries!) are next on my list. Oh, and don't forget the Ooey-Gooey Brownies and Mocha Malt for dessert.

Yum this looks great! I really miss eating seitan and this is for sure a way I'd love to eat it! The book sounds great too, I'll have to check it out!

Yay! Yeah, I had to refrain from copying down every recipe in that book before wrapping it up for you! hahah! I'd love to try that pot roast soon, so I may be calling you for the recipe!

Yum! i've wanted to try a pot roast for a while for my omnivore loving family. this looks perfect to try! i need to check out this cookbook for real!

I made that pot roast a while ago and really enjoyed it. I've made the pot roast, dumplings, brownies, oatmeal raisin cookies, and few other dishes from that book and I've enjoyed them all. It's a great book, the cheese is on my "to cook" list.

I got Vegan Diner for Christmas too and sadly haven't cracked it open yet, but I'll definitely be looking at this recipe as one to try first.