I'm a junk food vegan at heart. You all know that. But lately, post-cleanse, I've really been trying to clean up my diet with more raw foods (mostly side salads lately), less sugar (sorta failing there), and less processed foods (this doesn't mean I'm giving up Gardein, just eating less of it).

To clean up my diet, I'm keeping a few simple steps in mind. And I shared those steps today in an article I wrote for VegNews.com called "7 Steps to Becoming a Healthier Vegan." Check it out! And while you're on the VegNews site, look what else they did! They pimped my Cookin' Crunk cookbook in their 2012 Cookbook Preview!

But before you get all sad thinking I'm giving up Oreos and Ramen, think again. I'll never totally give up junk food, but I hope to make it less the star of the show and more like an extra on the set. I was still totally psyched to check out Lane Gold's new cookbook, Vegan Junk Food: 255 Sinful Snacks That Are Good for the Soul. 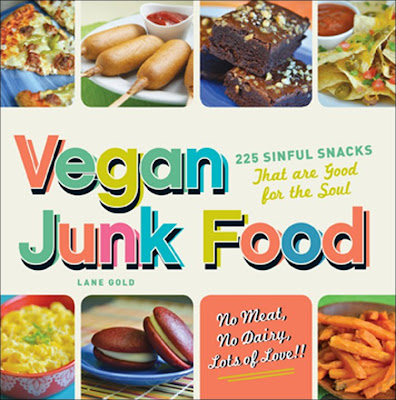 This book is filled with veganized versions of comfort food classics, like pizza rolls, Mongolian beef, and sloppy joes. But despite the book's title, many of the recipes are actually pretty healthy. Take for example, this Tandoori Tempeh on Onion-Garlic Naan with Cucumber Soygurt Sauce: 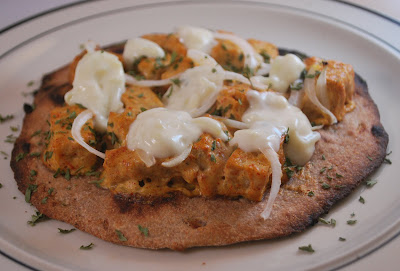 I made the naan with whole wheat pastry flour and it's loaded with sauteed onions and garlic. The tempeh is marinated in unsweetened soy yogurt mixed with cumin, coriander, and some other spices. The tempeh and some chopped onions top the naan, and it's broiled for a few minutes. Then its topped with a homemade cucumber sauce. The recipe didn't have enough spice for me, so I added sriracha after this shot was snapped.

Of course, with a name like Vegan Junk Food, you've got to have a few guilty pleasures! There's a Baked Ziti Pizza (yes, pasta on a pizza) that I would love to try. And the Chicken Fried Seitan and Gravy is definitely on my to-make list. Other highlights: Barbecue Chip-Crusted Tofu Bites, Crispy Chicken Ranch Burger, Tater Tot Breakfast Casserole, and Jalapeno Bacon Poppers. For dessert, I must try the Coconut Cherry Vodka Bars and the Butterfinger Chunk Cookies (they have Chick-O-Sticks in them!!!).

I'll be making dishes from this book over the next few days, so expect more review posts tomorrow and Sunday night.
Posted by Bianca at 10:08 PM

Please do a post on the ziti pizza--dear lord how I miss ziti pizza!!

i will love you forever if you review the corn dogs. i've been looking for a good hot dog/corn dog recipe for YEARS.

That naan doesn't look so junk foody to me, just delicious! I've never thought of marinating tempeh in vegan yogurt before, but it's something I'm going to try soon!

Erica - VeganDad recently had baked corndogs on his site, although they use premade veggie dogs.

I am so adding this book to my Amazon wishlist!

That cookbook looks amazing. Of course, I'll admit to at one time or another being a "junk food vegan" as well..but hey we're all human and everything in moderation, right?
I've yet to find chick-o-sticks anywhere!! I keep hearing about how they taste like a butterfinger..I must find them! :)

Dude, I'm all about some vegan junk food. I just saw that book at the store the other day and flipped through it and it only affirmed that yes, I do eat waaay too much junk food.

Pizza looks all sorts of yum.

I'm tempted to buy the book again. I had to fight my inner hedonist in order to try and stay somewhat healthy :-)

All of the recipes you mentioned in this post sound AMAZING! I'm definitely looking forward to seeing everything you cook out of this book and being incredibly envious of all of them! I've seen a bunch of different versions of tater tot breakfast casserole and they all looks SOOOO good! I'd love to see their version of it! :) If you are so inclined of course!

congrats on getting in the top 10 in Veg News!!! that's awesome. Can't wait to get a copy of your book, your recipes are ballin'!
And good for you for making changes, that's what it's all about. Kale is good, but so is vegan nachos with Daiya cheese and tempeh chilli. Life is about balance right ;)
Be Well!

A great idea for a cookbook.

The recipes in this book sound really good! I personally try to stay away from junk food (try being the operative word), but I bet I could get some great ideas for potlucks and parties.