Oops! I'm not sure if anyone noticed, but I totally forgot to announce the winner of last week's Good Belly product voucher giveaway! The contest ended on Wednesday, but it totally slipped my mind. Sorry! The winner is ... Leslie from Pixiepine! Yea!!!! She was lucky number 2 using random.org's number generator.

Now, on to tonight's post. My friend/co-worker Justin Fox Burks and his wife Amy, both of The Chubby Vegetarian blog, are working on a Southern vegetarian cookbook. It's kinda fu 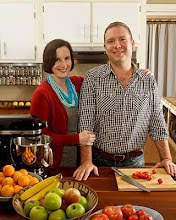 nny because my Southern vegan cookbook will be out in late spring or early summer (the months keep getting pushed back, so I'm being vague now). Two veg cooks from Memphis, who happen to work together, putting out vegan and vegetarian Southern cookbooks! How cool is that? Justin (who develops the savory recipes) is lacto-ovo and quite the gourmond, so our styles and ingredient preferences are very different. I think our books will be quite different too.

Justin and Amy (pictured on the right in a picture I stole from The Chubby Vegetarian) will be including some vegan recipes in the book though! And I volunteered to test a few of their vegan recipes. I've known Justin for awhile, and his food is always amazing. Last October, he guest cheffed an all-vegan dinner for Memphis' usually-not-vegan underground supper club, and the food was five-star, upscale, gourmet stuff.

Over the weekend, I tested his Vegan Sloppy Joe recipe, and even it was pretty fancy: 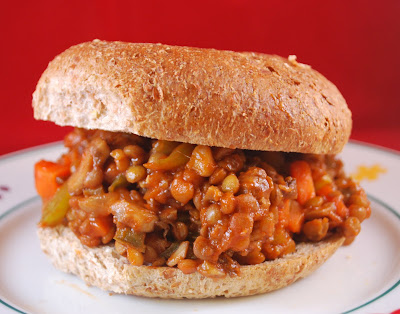 Only Justin would think to include a hint of white wine in his lentil- and mushroom-based sloppy joe. As most vegan know (thanks to Isa), lentils make the perfect sloppy joe base. But this one was more flavorful than any other lentil-based joe I've tried. A winner, for sure.

You wanna be a tester for the Chubby Vegetarian cookbook? They're looking for more help. Head over to their testing site and claim a recipe by posting a comment. You have a week to test it out, and then leave feedback (on how you liked it and if the instructions were clear) in another comment.
Posted by Bianca at 10:36 PM

Thanks for pitching in, Bianca! We are crowd sourcing our recipe testing so, Vegan Crunk readers are welcome to get involved. Just head over to the testing site, claim a recipe by posting a comment on the recipe you'd like, and cook it within a week. Leave us a comment telling how you liked it and if the instructions clear. Here is the link: http://chubbyvegetariantesting.blogspot.com/

...and thanks for all the kind words. That's sweet!

that is quite possibly the most delicious vegan sloppy joe i have ever seen..it seriously looks..AMAZING.

Yay for Good Belly- thanks!!

That is so great that the two cookbooks will be coming out from the same area! Lots of veg love to go around :) That sloppy joe looks REALLY great! Very excited to see more from both books!

This is one of the best dishes I have tried on the site. I love these.