Although my first cookbook has yet to hit store (and Amazon) shelves, I've been done with the recipe development for over a year. I spent all of 2011 making stuff from other people's books because I wanted a break from creating my own recipes. And I'm still doing lots of that because I find few things more relaxing than cooking other people's recipes.

But my creative drive has needs. So I'm slowly but surely starting my next project. My first book — due out in late spring or early summer — is a vegan Southern cookbook, filled with downhome veganized versions of the classic country cookin' that I grew up eating. But I've decided that my next project will be veganized versions of retro recipes from the 1930s, 1940s, 1950s, and 1960s. Sort of a vintage vegan approach.

I love flipping through my mom's massive collection of retro cookbooks. The food they ate back then was SO not vegan-friendly, but that makes it all the more fun and challenging to remove the eggs, dairy, and meat. I'll slowly make things here and there, and we'll see where it goes. Another cookbook? Maybe an e-book? Who knows?

But I'm launching this project with a homemade Cream of Tomato Soup: 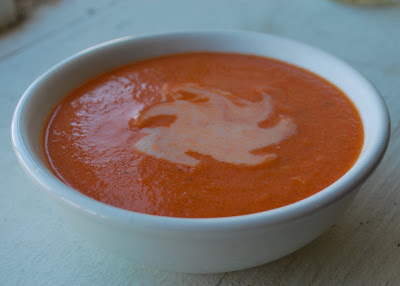 This was veganized from the Better Homes & Gardens Vegetable Cookbook (published in 1965). Despite its name, this skinny hardcover book is filled with meaty recipes. This recipe was vegetarian though, but I swapped out some basic ingredients like soymilk and vegan margarine. It's creamy, thick, and delicious. And dare I say way better than the old Warhol-esque Campbell's condensed tomato soup from a can? I'm saving up these recipes for a possible second book, but to celebrate my first recipe for the new project, I'm sharing this one.

Break up the tomatoes with your hands and drop them into a saucepan. Pour the remaining tomato juice from the can in the saucepan. Add the onion, salt, agave nectar, pepper, and bay leaf. Bring to a boil over high heat. Decrease heat and simmer for 10 minutes.

Remove the bay leaf and discard. Allow the the tomato mixture to cool slightly and transfer to a blender. Blend the soup until everything is pureed.

Rinse the saucepan and melt the vegan margarine in the pan over low heat. Slowly whisk in the flour and stir constantly to make a roux. Slowly whisk in the soymilk, and turn the heat up to medium. Continue to whisk over medium-low until the soup thickens slightly, about 10 minutes (it won't reach a gravy consistency, just a thicker soymilk consistency).

Slowly the tomato mixture into the soymilk and stir to combine. Allow to heat through.
Posted by Bianca at 11:48 PM

Lovelovelove this!!!
My favorite recipes to date are the ones I get inspiration from in all of those great vintage cookbooks. The older the better!
Hooray for you!
xo-S

i love the new cookbook theme- that is so original!

also, i cannot wait to try the tomato soup. my husband ALWAYS wants tomato soup to dip his grilled cheeze in, but every recipe i've ever found for it is over complicated. this one is perfect!

Oh, this looks so delicious, I'll have to try it tonight! And, love your new cookbook idea!

What a great idea!! I know what you mean about loving to cook other people's recipes but also needing to create your own. This is such a great idea, I see it being incredibly successful. I love a vintage look too so I bet the book itself will be gorgeous!

Yay!!!! Love the new cookbook idea and my god, I love tomato soup. I will be trying this very soon I imagine.

I am anxiously awaiting your first book, and that's a great concept for your second!

Tomato soup and grilled cheese is an old favorite, but I'm not sure I've had it at all since going vegan - I must fix this!

That sounds like a fun project. When I was younger, my mom collected all them retro/vintage cookbooklets, and I was always reading them.

This is such a great idea for a cookbook, Bianca! As someone who can remember some of those decades (ahem!), I'd love to see what you come up with! Looking forward to it. :)

Love the idea! I was just going through my recipe box which I've had for 30 years and am starting to veganize a few old family favorites.

So exciting! Love that you're working on your next project...AND that you shared this recipe with us! Thank you!

I can't wait to see the first cookbook but the second one sounds really interesting as well. I love tomato soups - this looks perfect. It just needs a grilled cheeze on the side.

This is a great idea.A few years ago I was given a copy of Beachbum Berry's Taboo Table - recipes from old tiki bars restaurants. There are 2-3 vegetarian recipes in the book, so vegan? I love vintage cookbooks - good luck with this project.

This is such a fantastic project, very exciting. :)

I don't suppose you could offer a selection of soy-free and gluten free recipes in the next book, could you?

The new project sounds great. I really admire folks that can develop and/or veganize recipes. My few attempts at veganizing recipes have been disappointing. I'm hoping you'll be providing some tips on converting recipes along the way.

Congratulations on making the VegNews list of 2012's 10 Must-Buy Vegan Cookbooks for your first book. Hopefully we'll be able to get it before August.