We Got the Beet!

Everybody get on your feet. You know you can dance to the BEET! Jump in, get down. Round and round and round. Woooo!

Sarah Kramer's August recipe in the 2010 Go Vegan wall calendar has me singin' the Go-Go's. That's because the always-clever Mrs. Kramer named the dish "Beauty and the Beet Borscht": 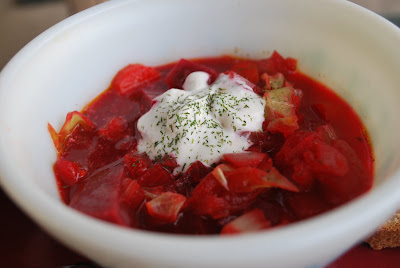 Can a recipe name get any cuter? Seriously? I didn't think so. I make every one of the monthly recipes in Sarah's calendar, but I was super-excited to give this hearty beet soup a try. I realize today is September 1st (and many of you are reading this on September 2nd), but I made the August borscht on Sunday, and that was still technically August.

Okay, confession time: I'm a former beet hater. Up until about two years ago, I thought beets tasted like dirt. But I first tried beets raw, when their earthy flavor is most potent. Boiling or roasting really brings out their delicate flavors. And who doesn't love bright pink food?!

The "Beauty and the Beet Borscht" featured loads of veggies, but in the picture, they're all beet-stained and indistinguishable. Hearty beets are simmered with delicate cabbage, sliced carrots, celery, and onions. It's topped with a dollop of Tofutti sour cream and seasoned with dried dill. If you don't have Sarah Kramer's wall calendar (for shame!), you can also find this recipe in La Dolce Vegan.

A soup like this deserves a thick slice of whole wheat bread. I had half a loaf of my last bread machine experiment in the freezer. I thawed out the slices and topped them with melty Daiya Italian shreds and crushed, dried garlic: 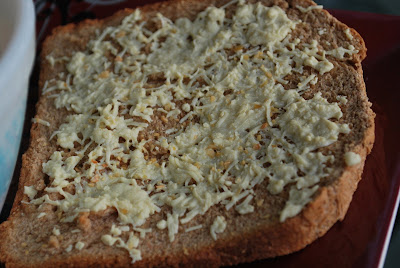 By the way, Sarah Kramer's 2011 Go Vegan wall calendar is already on sale at Amazon.com. Go here to order. I haven't ordered mine yet, but I definitely will. I love having a surprise recipe every month.

Don't forget to enter my Artisana raw coconut butter giveaway here. And if you'd like to learn more about me (or just see some yummy pictures of my strawberry shortcake), check out Rikki's "Ask a Vegan" interview with me on Seitanic Heathen Vegan.
Posted by Bianca at 11:24 PM

You are so funny! I love that beet song.

I agree, you are a funny person. I like you so much. I also love the beet song that you made. It is a sweet song. Thank you for this very inspirational post.

My boyfriend also thinks they taste like dirt, I just don't taste it! Or maybe I just like the taste of dirt. :) Either way that looks scrumptious.

I also hav come to love beets! The borscht sounds great (and yes, it's very cute). Must go check out your interview, too (at first I thought, "hey! They spelled my name wrong!" and then I realized, ooops. . .) Not that I wouldn't love to interview you, too! ;)

Kittee from the PPK made me and my husband some pink veggie beet soup once. It was crazy to eat healthy food that was HOT PINK!! Hehehe. Love your interview!

I love mixing beets with other stuff just to turn the other stuff pink! Like potatoes or pasta. <3 beets <3

I got my Sarah Kramer 2011 calendar last month. I'll open it when the new year rolls around, not before!

Beets do stain everything, don't they? I'm going to have to check out the calendar, but I know I will peek ahead.

That beet borscht looks fabulous! I've always loved beets but my beet loving started with.. pickled beats. Haha. My mom was obsessed and I became obsessed too.