I consider myself a steak-and-potatoes vegan. Not real steak, of course. That's gross. But I'll take a hearty plate of faux meat and potatoes over a veggie-based dish any day. What can I say? That may be the most calorie-laden choice or the least healthy one, but whatevs. I like to eat. 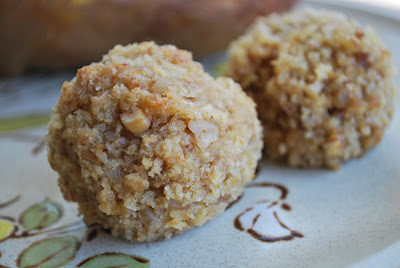 I've blogged about these before, and they're definitely going in my Southern vegan cookbook. The seitan is homemade, of course, and it's encrusted with chopped pecans and a delicious maple-soy butter glaze.

I enjoyed my seitan with an equally-hearty Twice-Baked Tater: 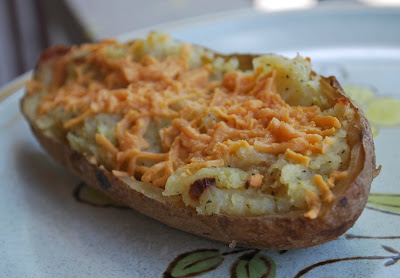 Another recipe for my cookbook, these taters are creamy and loaded with noochy, cheezy flavor. The melted vegan cheese on top is optional (as is vegan cheese in most of my recipes), but it certainly adds an element of awesomeness. I used Daiya Cheddar here.

Of course, I still needed to get my veggie group in. Potatoes are vegetables, but that's an awfully carby, starchy meal without some green. I tossed together this simple side salad of lettuce, cucumber, tomato, raspberry vinaigrette, and nooch. 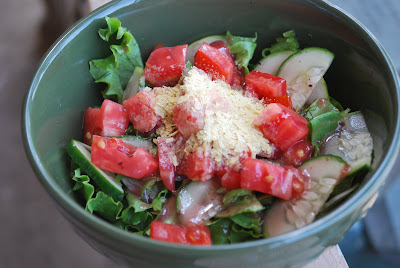 Wanna hear something really gross? After I shot these pictures, I accidentally knocked the plate of seitan and potatoes off of my back porch railing (I take most of my pics outside on the porch for natural light). The plate landed upside down on top of my nasty, old unusable grill, sandwiching the food in between the overturned plate and the grill lid.

But I wasn't about to let this yumminess go to waste. So I quickly scooped the food up, picked off a few visible pieces of dirt, and ate it anyway. Five second rule, right?
Posted by Bianca at 11:37 PM

Yummy goodness all around! I haven't had a twice-baked tatie in forever!! Now, I must make one. I heard it was the 10 second rule, by the way!!

Delicioso! the potatoes are my favorite :)

Everything looks great! And that's my biggest fear when taking pix of my food! LOL I do believe you did what any one of us would have done ;)

I bet those seitan medallions are delicious! I finally tried seitan a few months ago and have been in love with it ever since. While I don't particularly care for the 10 (or 5) second rule, my boyfriend would totally have applauded you for that one. lol

5 second rule FOR SURE! I wouldn't have thought twice if I'd seen you do that, totally normal. Cody might have fainted though. He's a bit prissier than me when it comes to things like hygiene and cleanliness! HAHAH! That's why he's in charge of cleaning.

Your meal looks amazing, as usual. Those seitan medallions look so crunchy and perfect. YUM.

I bet the pecans made a kind of protective layer against any kind of grill-grime.

I've dropped food on the carpet, picked it up, picked off all the animal hair, and enjoyed!

Hahaha. I would have done the same as you re: "5 second rule"! Nice work.

Tee hee. I ate a butternut ravioli that fell on the kitchen floor yesterday. Whatevs. :D

I am for sure going to make some twice-baked tatoes after I go grocery shopping!

OMG after all that hard work and you knocked over the food!! I would have ate it too!! Looks so yummy!!
http://thislittleshabbychicvegangirl.blogspot.com/

That potato looks divine - after seeing these photos I can see why you still ate the food after that minor mishap!

I'm definitely a meat and potatoes vegan. I have to tell myself to throw in some freshness so I don't feel bad about it.

I could not have let that tasty meal go to waste either. A little dirt can't hurt. I'm an avid "5 second rule" enforcer