Ever heard of BBQ Spaghetti? Supposedly, this Italian-meets-soul-food delicacy was invented right here in Memphis. That's what "they" say anyway. But since I don't know who "they" are, I'd like to know if BBQ Spaghetti is a regular thing in other places. Anyone heard of it? Had it? I know I'm asking a bunch of vegans, which may not provide for the best survey sample.

Even if you've never heard of 'cue-topped pasta, I'm sure you'll like my BBQ Tofu & Mushroom Spaghetti. It's going in the cookbook, but I'm going to warn ya now that it's not the world's prettiest dish: 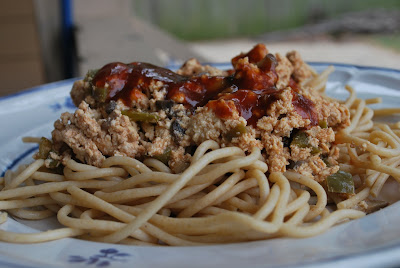 But it tastes mighty fine, fo sho. The tofu is simmered in homemade BBQ sauce, which is why it takes on that peculiar color. White + red = pink. But I always add a dash of fresh sauce to the top for extra barbecue flavor and because it just looks a little prettier that way.

On another note, the awesome Ms. Jen of Pain in the Ass Vegan has awarded me with the Most Versatile Blogger Award. Thanks Jen!! To accept this honor, I'm now supposed to spill the soybeans on seven things you may not know about me. Then I have to pass on the award to five other bloggers (it was originally 15, but Jen changed the rules and I'm stickin' with 'em).

So without further ado ... Stuff About Me:
Okay, now you know all there is to know about me — costumes, dead skin, rap music, and Foursquare. Now I'll pass the Most Versatile Blogger Award to some of my fave bloggers of the moment:

* Yum Veggie Burger- Because Ali's veggie burger reviews make me drool!
* Kuntrageous Vegan- Because Lacey's my homegirl over in Nashville! And because she has the best blog name on the planet.
* The Health Sleuth- Because Rick has gone from SAD to super-glad in just one year, and he's now a tireless crusader against evil.
* Voracious Vegan- Because, um, duh ... everybody loves Tasha!! Her snack plates and world hunger mission are uber-impressive.
* Veggie Cookie- Because Jessica loves the same kinds of food I do! I swear, sometimes when I look at her blog, I feel like I'm looking at my own plate. And she also loves beer!
Posted by Bianca at 10:27 PM

I've never heard of BBQ spaghetti... I grew up in Virginia and live in NY now, but have never encountered it in either place.

...I totally don't think your fascination with dead skin is weird though, because I feel the exact same way about my sunburns!
too bad we live in different states, I love costume parties as well :)

...and because I'm writing this comment as I read through your post from top to bottom, last but definitely not least - THANK YOU for the award!! you are so sweet!

I'm going to assume that with the prevalence of pork, noodles, and BBQ-type sauces like siu haau and hoisin, something like BBQ spaghetti has been around in China for a few thousand years. :)

I don't recall seeing BBQ spaghetti anywhere else in the US, but there are similar things like putting chili con carne on top of spaghetti in Cincinnati. The Italian Rebel here in Memphis does a sort of funky, bright yellow "fettuccine alfredo" using Rotel, Velveeta, and shredded chicken. That's bound to be a Memphis original, right?

BBQ SPAGHETTI SOUNDS AMAZING! Wow, I've never heard of that combination before, but now I have a feeling I won't be able to stop thinking about it till I make some. YUM!

Thank you so much for the award! You are too kind! And.....eeewwww! Dead skin! I think my skin has been beaten into submimssion after a lifetime of frying in the Saudi sun, so I never get sunburns anymore...but if I did...well, let's just say I see where you're coming from!

And oh how I wish we lived closer together! I want to come to your fun theme parties. I love dressing up in costumes, too.

I'm so glad you love being from the South now! It's my favorite place in the US, and Southern accents are AMAZING! A lot of my family is from Texas/lives in Texas, and the accents aren't quite as good there, but they'll have to do. I love anything and everything about the Southern USA. Especially the food!

I'm subscribing to Kuntrageous Vegan for her blog name alone :)

BBQ spaghetti. Never heard of it. Want it.

I think I've heard of BBQ spag but always thought "gross" when I heard it. But you know...if you haven't tried it, don't knock it! It's amazing that you can plan meals that far in advance. I try to, and then change everything when it's time to cook!

I never heard of this but it sounds really delicious!

Thanks Lady!! <3
You're one of the 3 blogs I make sure to check every single day. I love reading what you have to say and hearing about your creative food ideas. I can't wait for the day I can preorder your book!

BBQ Spaghetti sounds like a fantastic idea. Thanks for sharing the weirdness about yourself.

BBQ spaghetti? Ain't neva heard of it! But I'm from the northeast, so maybe that's it.

Wow I have never heard of BBQ spaghetti and I am from Florida! We always said that the south was north of us though...

My husband is going to die and go to heaven with this. You have made his day, heck maybe even his year!

I've never had or heard of BBQ pasta but it looks interesting. Here in the tri-state area they make BBQ pizza so I guess it's a similar concept, Italy meets the dirty south :)

Yea...definitely never heard of BBQ spaghetti. I grew up in Georgia, but then again, I am vegetarian so that might have a little something to do with it :)

I love costume parties, maybe it's because my b-day is on Halloween.

Planning your meals 2 weeks in advance...I'm so impressed!

BBQ Spaghetti sounds great to me! And thanks for the interesting list (though I hope you're not licking salt off your skin after you've just peeled the dead stuff off--oowwwwwwch). ;) And I once went to a party dressed as Magenta! So much fun. Now I must go check out those blogs that are new to me. :)

I have heard of BBQ spaghetti, and it seems like each region has its own preferred spag topping. Here, it's sweet chili. I do like BBQ sauce on anything; it never occurred to me to veganize this but I bet it's tasty!

Thanks for the award! I'm glad to see you being proud to be from the South and spreading the good food with your cookbook and the tone and twang in your writing. We need some good images of Southerners being southern.

Yes, I have had BBQ Spaghetti and I remember it being awesome...It was as good as everyone says, so on that note, I can not wait to try the vegan version that you have come up with.
I've lived in the south my entire life, so I can relate to all the southern things you have to say. :O)

Never heard of bbq spaghetti, but I think it is brilliant! I love me some bbq sauce :-) And mushrooms? Swoon. Mmmmmmmmmmm

Eeeenteresting. I'm going to have to check out the tester blog so I can make me some BBQ pasketti for lunch this weekend.

Hey chicky -
I found your blog a little while back via someone rad (can't remember exactly who at this moment, because it's kinda late and I should be in bed.)
Just wanted to THANK YOU from the bottom of my hungry little tummy for this post. I'm inspired, and a little scared.

My family, who is Italian and, would cringe at the thought of BBQ spaghetti. I'd totally try it though. I like fusion food!

WHAT?! I think my husband would love BBQ Spaghetti.