Land of the Magical Breakfast Burrito

This morning, I posted something on Facebook about how I wish I lived in magical land where vegan burritos fell from the sky. A Facebook friend replied "I think that magical land is called Portland." While I imagine he's exactly right about vegan burrito rain in Portland, I'm nowhere near Oregon ... and that might as well be a magical faraway land too.

But this Vegan Breakfast Burrito did land on my plate this morning, albeit because I placed it there (though I prefer to think it was magically delivered to me by breakfast fairies!): 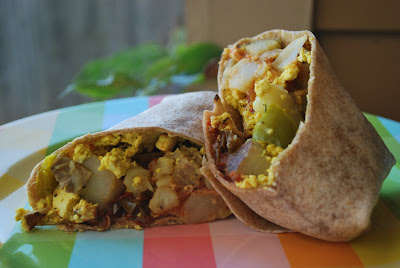 It'd been ages since I'd eaten a breakfast burrito, and I'd forgotten what a great idea they are. All your breakfast food groups wrapped up into one easy-to-eat, whole wheat package.

Prepare tofu scramble according to directions listed here. Set aside.

While the scramble cooks, fry the sausage slices in a skillet sprayed with non-stick cooking spray. Fry for about 4 minutes on each side or until brown. Set aside.

Meanwhile, steam the potato cubes in a steamer basket for about 15 minutes or until very tender. Season to taste (I seasoned mine with J&D's Bacon Salt).

Heat one burrito wrap in the microwave for about 20 seconds to make it easier to fold. In the center, fill with 1/4 batch of the tofu scramble. Tear up one sausage patty into small pieces and place atop the tofu. Measure 1/4 cup of potatoes and place those on top of the scramble and sausage. Top with Daiya and salsa.

Fold, wrapping the two ends in first and then rolling up. I like to put my rolled-up burrito back into the microwave for about 25 seconds to help melt the Daiya.

Repeat with the other three burrito wraps. Note: I've been making one of these each morning since Monday.
Posted by Bianca at 10:41 PM

The coconut butter you sent to me was delivered today! NOM NOM NOM. :) Thanks again, love! Super cute card in there, too.

I luuuuuurve breakfast burritos! It's so nice to have a big, warm, filling breakfast that doesn't take forever to put together in the morning.

Mmm! What a good idea! I'm very uninventive with my breakfast, it's either something bread-like such as bagels, crumpets or toast with chocolate spread, peanut butter or jam... or something like porridge/overnight oats. And on weekends something like baked beans and waffles. So this is a great idea to mix it up a bit. In Ireland the "Breakfast Roll" is what a lot of people get at a shop if they're dashing to work, which probably contributes significantly to the obesity problem: EVERYTHING from a fry-up in a large white baguette! Eggs, sausages, black pudding, bacon, hash browns, mushrooms and tomatoes... YUK! So, I think you've actually inspired me to try making my own vegan version of the famous Irish breakfast roll! :)

That looks great! I'm hosting a brunch this weekend and doing burritos and vegan chorizo from Vegan Brunch! It's my first sausage making attempt- wish me luck!

Wow...that sounds delish! That would have to be a weekend meal for me though. I hit the floor running in the mornings. A smoothie is about all I have time to put together. I'm going try that this weekend though. Thanks for sharing your recipe! :o)

Yum, I wish they fell from the sky too! I love vegan breakfast burritos :)

What a great hearty breakfast. I've never heard of bacon salt, that sounds worth looking into.

Yum! I wish this breakfast burrito would fell on my plate this morning :)

This looks wonderful, I haven't had a breakfast burrito in years!

Mmmmmm... Your burrito looks pretty darn fantastic! Don't worry, I have yet to see vegan burritos fall as rain in Portland. It would be nifty though!!!

That breakfast burrito looks so damn amazing. You'll have to let me know if you make the quesadilla. I love me some feedback.

that looks so delicious, might have to be my saturday breakfast!

Amiable post and this enter helped me alot in my college assignement. Thank you seeking your information.