Fast forward to today — Misti's 35th birthday! We met for dinner at the Majestic Grille downtown, and as per tradition when friends have birthday dinners, I brought a batch of cupcakes. I pulled up that memory of Misti's love for pineapple upside down cake and settled on these Pineapple Right-Side Up Cupcakes from Vegan Cupcakes Take Over the World: 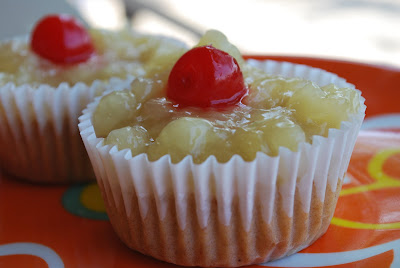 So cute, huh? The batter is made with pureed crushed pineapple and it has a yummy, gooey crushed pineapple topping. They were pretty tasty, but the cake part felt a little too dense for me. Unlike most cupcakes in the book, this recipe called for about 1/4th cup less flour but the cooking time was the same as most of the other cupcakes. I think maybe they could have been cooked about five minutes less than the recommended 25-minute cooking time.

Taste-wise though, they were delicious .... just more like a small muffin topped with pineapple rather than a fluffy cupcake.
Posted by Bianca at 10:45 PM

Adorable and totally delicious-looking! I haven't tried this recipe yet, but I'm thinking I should...

They are a temptation! ^^

I wish I had a friend who always made birthday cupcakes! Maybe I'll have to become that person.

I always think of pineapple upside down cake as really dense. Maybe I've never had a good one... glad to see they have those cute and tasty maraschino cherries!

haha! That made me laugh but I think it's extremely thoughtful of you. I bet she appreciated that.:)

I enjoyed reading your blog. Keep it that way. exkrnswhjssoforo

I love that book! That looks like a good cupcake to try.

Squeee! They're so cute! I don't think I've tried that recipe yet. Happy birthday to Misti, what a lucky birthday girl! :)