Like any good Southern girl, I certainly don't fear fried foods. But I'm a Libra so I'm all about the balance. I like to bake some things, but other foods just require fryin'. My meal tonight was a perfect example of the yin and yang of baked versus fried foods. My protein were these Cornmeal Crusted Tofu Stix: 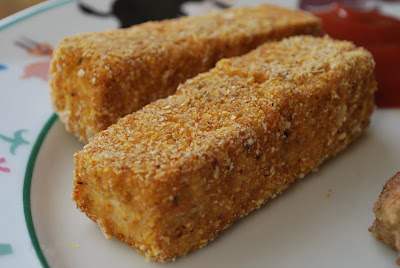 These baked, "chicken" strip-like finger foods are going in my cookbook. They would also be tasty fried, but I haven't tried 'em that way and see no reason to change up the recipe. They get super-crispy in the oven, and they're perfect for dippin' in ketchup, barbecue sauce, or maple-Dijon sauce.

I balanced out the baked main dish with these Fried Cucumbers: 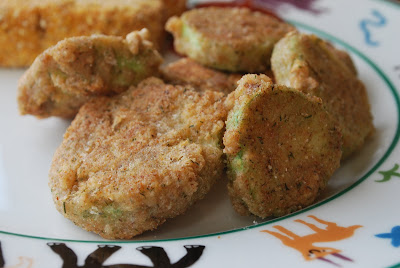 I know, you're probably thinking, "fried cucumbers?! What?!" I thought the same thing when I first heard about this Southern delicacy a couple years ago. I certainly didn't grow up eating cooked cucumbers, but my old next-door neighbor Wes did. He challenged me to try them, so I whipped up a batter seasoned with dried dill and some other stuff. I pan-fried them in a little hot oil, and OMG, they were amazing. These are definitely going in my cookbook.

They taste a lot like fried pickles, but they retain some of that cucumber crunch. They're really tasty dipped in my homemade Vegan Country Buttermilk Ranch (also going in the cookbook).

My other veggie side wasn't fried, but a lot of Southern folks call it fried. I call it Not Really Fried Corn: 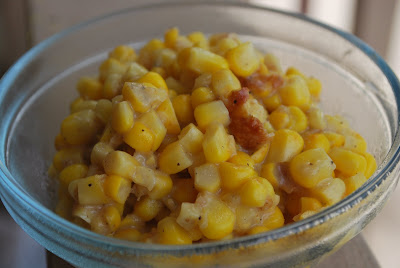 My mama calls this dish fried corn, but it's actually boiled with soymilk and flour and cooked down until the liquid is absorbed and the corn is super-creamy. Once absorbed, the flour in the corn cooks to the pan a bit, leaving little sorta-fried brown bits behind. You can see one poking out in the picture. The little brown bits are the best.

So there you have it — baked meets fried. Now a question for y'all: How do you feel about frying? Do you reserve fried foods for special occasions or eat them whenever you please? Or do you shun fried foods completely?
Posted by Bianca at 9:54 PM

That all looks delicious! I used to eat fried food with abandon back in the day, but eventually decided to cut back after I and my doctor realized that greasy food was at least partially behind some painful health problems I experienced at the time. Despite all of that, I don't shun fried food completely; I just eat it rather infrequently.

Yes, I agree with Tiffany. Fried foods for me are rare, but I will never say never to anything! I do want to try those FRIED cucumbahs!!!

I've never heard of fried cucumbers before, but I am very intrigued! I am the first to admit I'd pretty much try anything fried.

I rarely eat fried food. If a recipe calls for fry, I usually try to find a way to bake it instead. Fried food is just too greasy for me but I will admit that I do love fried food. It's just for health reasons that I choose not to eat it.

You crack me up. balancing fried with baked. And fried cucumbers sound awesome!

Fried cucumbers?! That does sound intriguing. I don't eat fried food that much because I haven't mastered the art of not burning things to a crisp, but in general I will try it if I have a good explicit recipe to work from. (Like, exactly how much oil, and how long should I wait before I put in the food?)

I have never heard of fried cucumbers. It doesn't sound too bad though. As I have told you before, I am still wary of fried food. I really need to get over it already. Maybe when your cookbook comes out I will finally have an excuse to fry something.

I eat fried food whenever I feel like it! Sure, that isn't too often ... but I refuse to bake falafel when I can fry them :)

Also, fried cucumbers sound strange and intriguing. I'm definitely going to have to try that out.

wow this meal looks amazing! im getting really excited for your cookbook! i love all your recipes

All that looks so good - especially the corn. I love fried corn made the same way, and fried squash. But when it comes to deep fried foods, I save those for treats when eating out. It's not really about being too healthy for them. Maybe I'm lazy, but it saves me the mess of cleaning up. I usually make eggplant parm once or twice a year with fried eggplant, though.

The water in the cucumbers didn't cause oil popping? if not..count me in. I love fried foods; even if I can't eat very much fried deliciousness without getting sick.
Also-Libra's rock. My hubby is one as well.

I've never heard of anything like that corn dish, but it sounds amazing!

that's one helluva awesome plate o' yummminess, Bianca! dan and i started using brown rice flour with cormeal on our oven-fried tofu when i went gluten-free, it's sooo super yum! i can't wait to try out your recipe - your 'fu looks absolutely perfect! fried cucs sound delightful as well, and i'm all about that colorful not really fried corn. mmmmmmm! we don't fry in our home (i'm too clumsy in the kitchen), but occasionally we'll have french fries and such when out. fried foods are just so delicious!

Wow that meal looks delicious!
I would love to try it, could you possibly post a recipe I could work from?
Also check out my blog:
http://eatlikemee.blogspot.com/

All looks delicious. Trying to eat the fried cukes and corn through my screen, but even Apple isn't that great (yet)!

The baked tofu sticks look so crusty and yummy! I've already had your fried squash, so I'm sure the fried cucumbers are awesome too! :)

Fried pickles are pretty much one of my vary favorite things ever - so fried cucumbers? Yes please! It all sounds so good and I love new good corn recipes! Can't wait to try this!

Your food looks absolutely amazing. It totally convinces to get your cookbook. I personally try to avoid fried foods, but of course I fry once in a while.

When's your cookbook coming out? I'm definitely interested...those cornmeal crusted tofu sticks look awesome! If you are in need of a tester I would love to help!

I eat fried foods, just in moderation. too much grease makes my stomach unhappy anyway.

Vienna is all about the fried food, so I have been eating more than usual. I don't fry at home though.

darnit, I wanna know how to make those crispy tofu sticks now! :-) I have tried to bake crusted things rather than frying and they didn't end up crispy. maybe too much batter...

I pretty much stay away from all fried foods, but I do occasionally allow myself some good, fried falafel, or if I'm really being bad, Fritos!

Fried cucumbers is unusual to me, as in this is the first time I've heard of it *wink* though I like the idea. And oh by the way, for your fried tofu, you might as well want to try vinegar with cucumber for your sauce/dip.