Adopt a Turkey, Don't Eat One

Okay, so I totally ripped off that blog title from Veg Out with Us. But that's where I got the inspiration today to start a new Thanksgiving tradition — adopting a turkey from the Farm Sanctuary.

Meet Gideon — the turkey I chose to sponsor for a $25 donation to Farm Sanctuary: 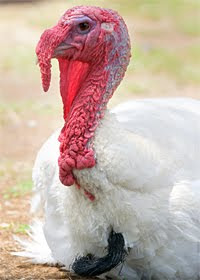 There were several turkeys to choose from, but Gideon's little red skin flap was too cute to resist. The donation money will help Gideon and his turkey buds live peacefully at Farm Sanctuary's locations in California and New York.

Since 1986, Farm Sanctuary has rescued more than 1,000 turkeys, placing them into loving homes. They also educate folks about the plight of commercially-raised, factory-farmed turkeys and provide recipes for meat-free Thanksgiving dinners.

I've been meaning to start a turkey adoption tradition for years. But I finally hopped over to the Farm Sanctuary's website today and made a donation after reading this post on Veg Out with Us. I gave up meat in 1994 on the day after Thanksgiving, and 10 years later, I liberated myself from dairy and eggs on the day after Thanksgiving. Adopting a turkey every year seems like a fitting tradition.
Posted by Bianca at 11:37 PM

Aww, Gideon! I can't decide who to adopt.

Thank you so much, Bianca, for reminding me!! I did this last year but was going to forget this year if you hadn't said something. My turkey baby needs a sister (or brother?).

But I'm with Melisser; how to choose just one???

Ack, I ate decisions. Wish I were Paris Hilton-rich and could adopt them all :).

Love it! I have meaning to do it this year also. I just can't decide if I should do Farm Sanctuary or Woodstock...just because I personally met the turkeys at Woodstock. I'm just being cheap, which is completely not the point so...I need to just do it!

Yay! I adopted Olive! Our turkeys are getting some vegan blog love!

Thanks for sharing your encouragement on adopting a turkey for thanksgiving! Gideon is so cute.

What a great idea.. Tofurkey for the holidays.
Debra @ Vegan Family Style

Aw, Gideon is adorable! Love all that red skin everywhere. :)

Glad you were inspired to adopt a turkey! It's a great tradition, and one I look forward to every year!

Compassion will always be in-style

Thanks for adopting Gideon, and passing the word on to everybody! Farm Sanctuary also has a petition campaign this year to have the annual "Presidential pardon" turkeys go to one of the shelters. I don't know if that will happen, but it would be great if they did.

hooray for adopting a turkey, Bianca! gideon is such a handsome man, too! your post totally reminded me that dan & i had yet to adopt our turkey this year - so i hopped on over to farm sanctuary and adopted bubbles. w00t! hoooooray for starting such a kind tradition! :)

Thanks for sharing this Bianca. You inspired me to adopt a turkey too!