Several weeks ago, I received a bundle of books to review from the Book Publishing Company in Summertown, Tennessee (an awesome publisher of vegan and vegetarian cookbooks). One of those books was Buddha's Table: Thai Feasting Vegetarian Style by Chat Mingkwan.

The first recipe I chose to try was the Yellow Curry, a coconut curry influenced by traditional Indian fare: 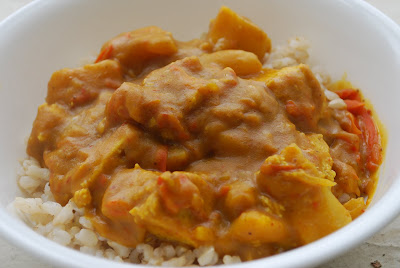 Though you can't really tell from this picture, the curry contains soft white potatoes, kobocha squash, red bell pepper, coconut milk, and cubes of frozen (and then thawed) tofu. The recipe didn't actually call for tofu, but I need my protein ... and tofu is delicious in a curry. It did call for taro, but I couldn't find any at my neighborhood Asian market.

Also, the dish called for both coconut milk and coconut cream. However, the only thing resembling coconut cream I could find was Cream of Coconut ... and seeing as how that contains a ton of sugar, I knew that wasn't right. So I subbed the rest of my MimicCreme (a delicious vegan alternative to heavy cream) instead. The result was delicious, and the non-coconut flavored heavy cream didn't take away from the rich flavor of the coconut milk.

Expect more tasty dishes from Buddha's Table in the very near future! Some of the recipes call for really strange, new (at least to me) ingredients like lily buds and lotus seeds, and I'm anxious to seek those things out at Asian markets around town.
Posted by Bianca at 11:35 PM

That looks great. Yeah I've never seen coconut cream before either, but the kind you found would actually work perfect for what I need, trying to create a coconut cake recipe...

yay for your substitutions really adding to the dish - it sounds awesome! tofu would have been my choice for a curry, too - and anything with coconut and kobocha squash is a winner in my book. mmmmmm!

Yummy! I just LOVE potatoes in curry- They just soak up the spices perfectly.. and have been my favorite addition to curries lately! I really love coconut curries the most!

Yum! Looks just like the yellow curry I used to get from my favorite Thai restaurant... oh how I miss it!

I need you to come over here and make this for me tonight! Dinner will be delicious. Seriously, that is one delicious bowl of food and it sounds amazing. Lucky you for getting so many fun new cookbooks to try.

I was so excited when I saw the title of your post. Thai and Indian are my all time faves! I've only had yellow curries a few times from Thai restaurants, I should try making my own too. Yum!

Yum! That looks delicious! And, hey, I get to see you tonight! I am thankful for Bianca!

One day we will look around and ask: Where's Bianca? She moved to The Farm they will tell us.

Sounds delicious! I love adding winter squash to curry, it's perfect. I look forward to seeing what else you make from the book!

wow, i don't think i've ever had lotus, or taro root! that looks delicious. anything indian-inspired is A OK with me :)

Thai food, and Indian food.. both my favorites!

Oh man, that looks super delicious! I think you can make coconut cream by buying full fat coconut milk, not shaking it, and scraping the more solid part off the top of the can.

I've looked at this book several times and somehow never managed to buy it - so I am watching with great interest!

I LOVE THAT BOOK!! The Pad Prik King is one of my favourite things in there, give it a go! :D

I'm going to have a go at the Tom Kha tonight, will let you know how it turns out if you like.

P.s. The Vietnamese book written by the same author is also pretty good :)

The Tom Kha soup was good but far too salty for me (I ended up adding another litre of water and 2 more kaffir lime leaves to cope with it!). Next time I'd probably omit a TBSP of soy sauce and the powdered stock, they're unnecessary.

Last night we made the Pad See Ew which was INCREDIBLE! I highly recommend that recipe :D

We're having a go at the Pad Thai tonight.