Black Friday isn't just some crazy excuse for mass consumurism. It's also my vegan-iversary! It all started in 1994. I ate turkey on Thanksgiving Day and something just didn't set right in my 14-year-old mind. I'd already gone "semi-vegetarian" by then (eating only poultry and an occasional piece of fried catfish ... never cared for seafood even when I ate meat), and seeing that giant turkey carcass on the kitchen counter really grossed me out that year. So I went vegetarian on Black Friday in 1994.

Fast forward to 2004. In celebration of having 10 years as a vegetarian, I decided to try veganism on the day after Thanksgiving. It was really just a month trial run ... to see if I could do it. Thirty days later in late December 2004, I realized how easy being vegan could be. So I made the decision to be vegan forever.

This year, Black Friday marked my 5th vegan and my 15th vegetarian anniversary! Since my mom and I have started a new tradition (as of last year) of doing our holiday shopping on Black Friday (because we're crazy enough to fight the crowds for a good deal!), I've also began a new tradition of dining with her at my favorite Memphis breakfast joint for a vegan-iversary brunch.

Here I am at Brother Juniper's, about to stuff my face with the most delicious tofu scramble: 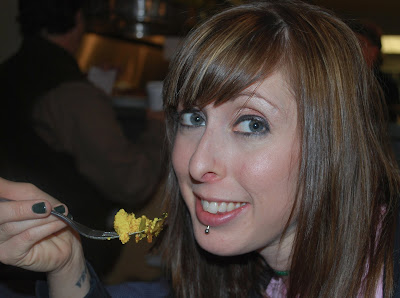 And here's a shot of my vegan-iversary brunch plate — the "Fahim's Special" at Brother Juniper's: 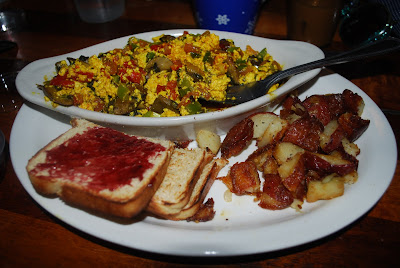 Fahim's Special is a crazy-good tofu scramble made with a balsamic vinaigrette, kalamata olives, portabella mushrooms, and other veggies. It's served with tasty garlic home fries and whole wheat toast with all-natural strawberry fruit spread! I couldn't ask for a better post-Thanksgiving, vegan-iversary, Black Friday brunch!
Posted by Bianca at 11:33 PM

Congratulations!
My 2nd year veganniversary was actually a couple days ago!
All the food looks delicious.
Same thing happened with me. I decided to try out veganism for a week, and realized just how easy it was! And stuck with it, for a little over two years now. And I'm never stopping!

CONGRATULATIONS!!! I love hearing people's vegan stories, and yours is awesome! And that scramble....YUM!

That's awesome, you totally rock the house! I just had my 18 year vegetarian anniversary, and am working my way toward veganism!

That brunch looks perfect! Congrats on 5 years of veganism, next month will mark my 4th year. :)

ive been vegan for 2 years.. but with slip ups.. mostly accidental :(

Fantastic! Thanks for all that you've done for the animals and us hungry readers :)

Congrats! Today is my two month veganniversary but it's becoming so second nature that it feels much longer already :)

Awesome story! Seeing my parents cook raw meat was also a big inspiration for going veg... although it took a long time to work up the nerve to actually proclaim vegetarianism on family holidays and get-togethers. As often happens though, after a while, your family members get into it too, and find a way to include your preferences.

I'm thankful that your blog is here to show people that families can find a way to work veganism into their own traditions!

happy vegan-iversary, Bianca! that rocks so hard that you've been vegan for so long. it makes me most happyfaced!

Happy belated vegan anniversary to you :) Mine is coming up in a month or so!!

Being a celebrity isn’t easy. If we were to itemize the celebrities who featured in their own sex tapes, we wouldn’t know where to begin and One night in paris where to end. Of course, any publicity is good publicity for most of the film stars. However, for some such sleazy antics are nothing but shameful. And, why not? When Paris Hilton Nude one has a much classier way to make a living, a fake sex tape is nothing but a disgrace. And Katrina Kaif’s porn video is an apt example. So, even though top class actresses paris Hilton nude don’t need to venture into such dangerous territory, it doesn’t take much time for people to term such accidental videos as a desperate publicity ploy.
Paris Hilton Sex
While Paris and her sister Nicky aren't known for being football fans, they are never ones to turn down a chance to VIP sex tape party, which perhaps explains their decision to attend the finals. Paris's sister Nicky hilton, 26, revealed their holiday plans via her Twitter page, saying: 'Headed to the doctor to get vaccination shots for my upcoming trip to South Africa. Can't wait for safari and World Cup!' Paris hilton responded by saying: 'Went shopping with @NickyHilton at Chanel, Mac and Intermix. Bought so many beautiful things for my trip. :)' Maybe Paris hilton will bring more suitcases back than she took over?
the one night in paris
But perhaps the problem at hand and must keep an eye on the left side of One Night in Paris. After all. A taste of entertainment in the development of high standards that people do not want some people get a clear expectation, thank you for setting the movie. This is what celebrity sex tapes do, sex tape people Shimunai Paris? To love because of some plot or the audience will rise as much to do with a watchful eye. popular culture today tends to rise, but still want to take a life of their players.

am i able to take a automobile insurance business to small claims court? The insurance supplier refused my claim, (I would go ahead and take to blame driver to small claims but I have no address to serve them or send a demand letter). One other driver was at fault but his particular insurance provider states there is a difference within our statements to make sure they have to take the word of their insured vs. my word. I'm sure they acted in negative trust and did not carry out a proper investigation would this often be a valid claim in small claims court? I must make to blame drivers insurance provider (not my own) to small claims with the damages to my car.

I've been looking to find some good GPA scholarships on-line, however could not find any till now!

Then I found this site, so definitely verify them out! They even give away enormous quantities of daily money!