Sometimes recipes are so tasty that you feel inclined to save them for special occasions ... perhaps to only make them once a year so you'll savor every delicious bite when the time finally rolls around to make the dish again.

That's the case with this Smoky South American Seitan Stew from Grub: Ideas for the Urban Organic Kitchen: 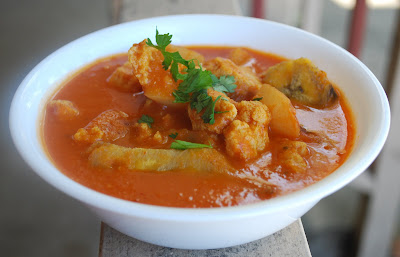 I only make this stew once a year — around Samhain-time (a.k.a. Halloween). Traditionally, Samhain is the night when the veil between the worlds of the living and the dead are the thinnest. So I make this stew and eat it while I think about my dead friends and family. Sounds morbid, I guess. But I feel like it's a fitting way for a foodie to honor their memories.

The tomato and chipotle pepper based stew is loaded with chunks of tender seitan, cubed potatoes, and fried plantains. The recipe comes from Memphis native and vegan soul chef Bryant Terry's first cookbook, Grub. Though the front half of Grub is mostly text about the importance of eating organically, the back half of the book contains seasonal and themed vegetarian (mostly vegan) dinner party menus. This stew is listed in one of the menus for fall.

Though I only make it once a year, I make a huge pot. So I've got a few bowls leftover. I'll be enjoying a bowl tomorrow for lunch with a hearty slice of whole wheat beer bread.
Posted by Bianca at 10:37 PM

oh wow! I will have to try this recipe!!

i love that you save the smoky south american seitan stew for once a year, Bianca - it makes it all that more awesome! the stew looks amazing, and i had forgotten how darn good it sounds, too. i still need to check out grub. i love a cookbook that emphasizes organics, & themed dinner party menus sound really freak'n cool & fun. yay!

How funny! This looks very similar to a pumpkin seitan stwe I made a couple of days ago (going to post about it soon). Sounds very delicious!

I love how hearty and rich this looks, what a delicious meal. Your tradition is beautiful, what a special way to honor your friends and family that have already passed on.

This looks delicious and hearty. I love using seitan in stews!

Those ingredients sound wonderful together. I'd have a hard time limiting myself to once a year!

I'm going to have to get myself a copy of "Grub" for this recipe alone! My mouth is literally watering at this moment!

Plantains, potatoes, and seitan, OH MY! I can't wait to try this!

Interesting stew, I've never heard of it. How fitting it is to make this at this time of year.

Oooh, I love a giant pot of stew. That looks super yummy.

This is one cookbook I don't have, but that sounds like an awesome mix of flavors.

What a great web log. I spend hours on the net reading blogs, about tons of various subjects. I have to first of all give praise to whoever created your theme and second of all to you for writing what i can only describe as an fabulous article. I honestly believe there is a skill to writing articles that only very few posses and honestly you got it. The combining of demonstrative and upper-class content is by all odds super rare with the astronomic amount of blogs on the cyberspace.