When I was a kid, I loved my mom's stuffed bell peppers. She'd quarter a pepper, boil it, and top each quarter with a rice/beef/cheese combo. When I went vegetarian at age 14, she started making mine with rice and cheese only. It's been years since I've eaten that, and I don't even know if my mom makes that dish anymore. But I decided to re-create a vegan version for my cookbook — "Beefy" Quinoa Stuffed Bell Peppers: I steamed the peppers, stuffed 'em with a mixture of quinoa, TVP, and tomatoes, and then roasted the whole thing in the oven for awhile. Dare I say it, but I think they're as good as my mom's were ... just a little different. I tried some without vegan cheeze (like the one above) and some with mozzarella Teese. In my recipe, cheeze will be optional. These were also tasty with a sprinkle of nooch. 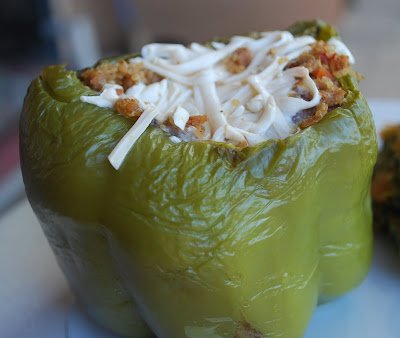 On the side, I tried Happy Herbivore's African Kale & Yams Mash from Pudge-Free Holidays: 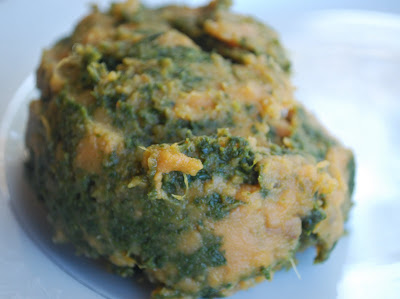 I've been eyeing this recipe since I bought Lindsay's e-cookbook last holiday season. It's a spicy mashed yam (mine were actually sweet potatoes because I've never even seen a real yam down here) mixed with pureed, seasoned kale. Topped with hot sauce, this was a delectable (and super-healthy) side dish.

By the way, the awesome Jessy of Happy Vegan Face found the recipe online for the Live Un-Stirfry with Cauliflower Rice recipe that I posted about on Tuesday. Here's the link, but ya'll still outta buy 30 Minute Vegan because it's amazing! Also, check out Chocolate Covered Katie's charity page drive — Operation Chocolate-Covered Kindness. When you view her page, she'll receive money from FoodBuzz, and she's sending all the money to The Enough Project (a group working to prevent genocide and crimes against humanity).
Posted by Bianca at 11:51 PM

Oooh, I haven't had stuffed peppers in ages, that sounds so good!!

stuffed peppers are so cute! i bet it will be even better when you finally get that daiya in the coming weeks!

kale + yams = love. i forgot about that recipe!

Stuffed peppers are SO great and really reminiscent of my childhood as well. But I bet the vegan version is even tastier! Mmmm....just the sight of all that melty cheeze makes the think that the cheeze wouldn't be optional in my house!

Or peppers were always filled beef, too. You version looks and sounds so much better!

Oh Bianca, thank you sooooooo much for mentioning the charity drive! Your generosity means the world to me (and, I'm sure, to all the people you've just helped me to help!).

Oh, and to answer your coconut-oil question: Ya know, I really don't know the diff between coconut oil and butter! BUT I have a friend who said she made the macaroon babies using solidified oil in place of butter and it worked just fine.

And I've never tried the gingersnap Larabar... I think it may be the only one I've never tried. Why haven't I tried it??? I just never think to pick it up. In your honor, I'm going to buy one :)

I've also had that Happy Herbivore recipe bookmarked forevah! Seeing yours, I just might have to dig out the recipe and get cooking.

Have a happy Friday, Bianca!!

ooo, the husband and i always make them in the summer, and we pop them on the grill. they are sooo yummy - we always top ours with cheese too!

Oooh yum! I have tvp, a pepper & quinoa in the house so I know what I'll be trying to make for dinner tonight!

stuffed peppers are the best! they're just so tasty. i don't ever put cheese on mine. one time, i did put a bit of mustard on them. it seems odd, but was really delicious!

Whew, this job hunt has kept me away from the Crunk for too long!
I love stuffed peppers - it's such a wonderful, versatile "stuffing" type of dish, and this one looks/sounds wonderful. I remember the aromas that permeated the house from my mom's s. peps. when I was a wee lass. Mmmmmmm('cept for the meat part)!

Oh yey!!! Thanks so much for posting the link to that recipe. I'll still buy the book cause it looks amazing but now I have dinner for tonight=) yey! Stuffed peppers look great too. There are so many filling options. Just cant go wrong.

we had stuffed green peppers when i was wee & i loved them, too! my mom would also make them with beefsies, cheese, and white rice. that’s too funny! i cannot wait to try your “beefy” quinoa stuffed bell peppers, Bianca! they look wonderful & sound so deeeelicious! i keep forgetting lindsay has those rock’n e-books. i think i need to check a few out – and get my butt over to Katie’s site and click away again today. thanks, Bianca!

That mash looks so good!!

stuffed peppers are SOO good..yours look amazing, glad you were able to recreate something your mom would make! :)

You know what's funny? That side dish looks exactly like Eames's breakfast. I did a double take. Then I realized that it totally makes sense since he had pureed sweet potatoes and kale with nooch.

So yummy! I am obsessed with stuffed things right now. It doesn't matter what, a squash, a pumpkin, a mushroom, a pepper, if it's stuffed I want it! And it must be quinoa stuffed! :-D

I loved those when I was little too, Those look great. My husband made a couscous version once that was delicious too.