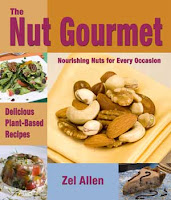 A couple of weeks ago, I was lucky enough to receive a box of three cookbooks to review from the Book Publishing Company in Summertown, Tennessee. The regionally-run book company produces loads of popular vegan titles by such esteemed vegan chefs as Joanne Stepaniak and Louise Hagler.

The review package included The Nut Gourmet by Zel Allen, a vegan cookbook filled with recipes involving — you guessed it — nuts! After thumbing through the cookbook, I settled on Nutty Oatcakes for my first review recipe: 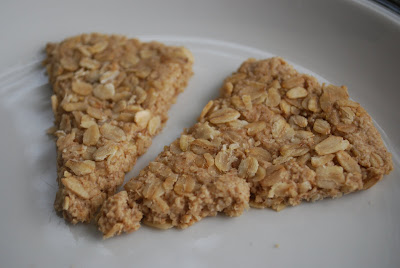 These are flaky breakfast flatbreads made from rolled oats and ground walnuts. They were wholesome and absolutely delicious spread with Apricot Cashew Butter, another Nut Gourmet recipe: 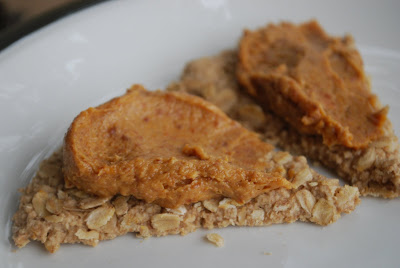 Okay, full disclosure: I subbed dried peaches for the apricots in the recipe so it's technically Peach Cashew Butter. For some crazy reason, my Kroger doesn't carry dried apricots, though they sell every other dried fruit on the planet. I figure peaches and apricots are pretty similar though. 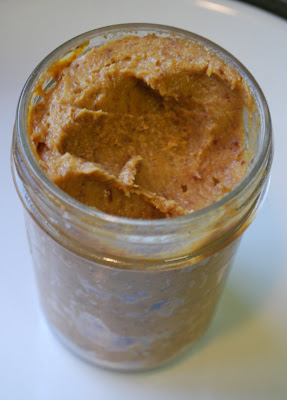 Anyway, this homemade cashew butter is totally fruit-sweetened ... no white sugar or artificial sweetener here. It's a little different from the cashew butter I buy at the store, but mostly because I'm not used to sweet nut butters. This would also be delicious spread on some whole wheat toast.
Posted by Bianca at 11:23 PM

wow, that book is such a good idea--all vegans are nuts about nuts--and your bread and butter look wonderful! i love the color of the cashew butter. is the flatbread really crispy or is it more like toast?

Oooh you are so lucky! I love these ideas, you can never have too many nuts. I literally just came in here from the kitchen where I was snarfing down a handful of spicy cashews, so this post is very appropriate!

Those oat bars remind me of Nature Valley's crunchy granola bars...but so much healthier! And, that cashew butter looks so good - I love flavored nut butters. Target carries a vanilla cranberry peanut butter in their Archer Farms line. It's one of my favorites. :)

actually, i kind of think peaches sounds yummier! those oat cakes look like they'd be a chewy rice cake. which is nice b/c i don't like the dryness of rice cakes.

i want to make oatcakes so bad!

That sounds like a great cookbook. Oh my poor shelf, it will soon break down.

These look fantastic. Are they similar to a granola bar? or more bread like? Either way they look tasty!

That looks so good, especially the peach nut butter. Hmmmmm, is this cookbook available for purchase? Will have to look it up!

Oooh, I love some nutty goodness. I am all about the cashews lately.

I am still waiting on YOUR cookbook. Let's focus on that please.

I love nuts! Nut butter on nut crackers sounds like a fantastic breakfast to me. You lucky lady!

both the nutty oatcakes & the peach cashew butter look excellent, Bianca! that's so awesome you get to review all these great cookbooks!

you know, now that i think about it - i don't ever recall being able to find dried apricots in my krogers either. they have prunes, pineapple, ginger, and raisins, but i don't think they have apricots. weird!

Thanks so much for making the Nutty Oatcakes from my cookbook, The Nut Gourmet, and putting that great photo on your blog. If your readers would like the easy recipe, they can visit my NutGourmet Blog. My family loves these for breakfast along with some fruit and a great cup of herbal tea. Drop in for a visit--i'll make you something yummy!

Oh, wow, that book is so me! I love the oatcakes and nut butter.