Because one day of gluttony just isn't enough, our local vegetarian group Food Awareness held a pre-Thanksgiving party to help gear up our tummies for the big day. About 45 folks — some vegetarians, some vegans, some omnis — packed into fellow member Vaughan's house for a Saturday night filled with delicious vegan food, wine, and a random late-night poetry slam. Here's a picture of the folks still hanging on at the end of the party: 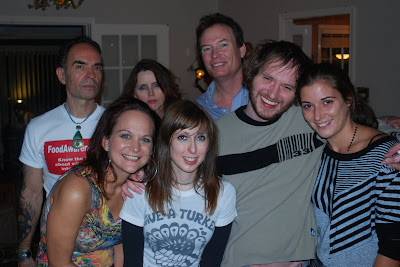 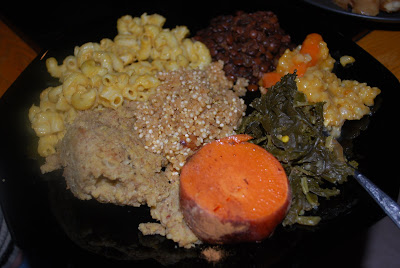 I made my mom's veganized recipe for Cornbread Dressin'. It's not the sexiest-looking dish, but it's very, very tasty. My mom's will ALWAYS taste the best, but I think I came pretty close this time. It seems to get better and better every time I make it. Practice makes perfect, I guess. 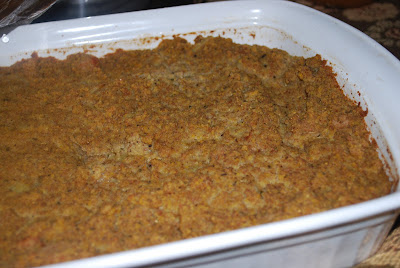 Barbara made some yummy Edammame Dip for pre-dinner snackin': 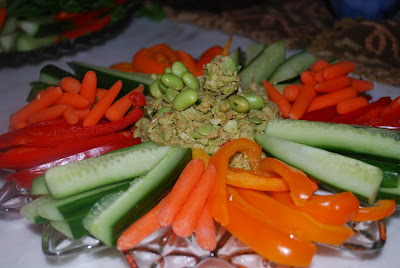 And we had tons of dessert! I took a photo of my dessert plate — loaded with pies, cake, cookies, you name it. But it didn't turn out so well. Here's a sample of what went on it though ... like this delicious Vegan Sweet Potato (or maybe it was pumpkin?...I can't tell the two apart!) Pie: 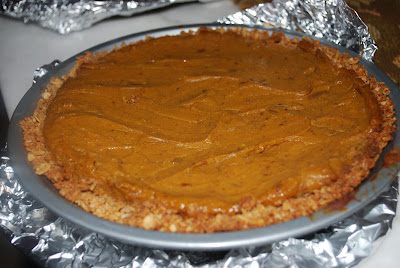 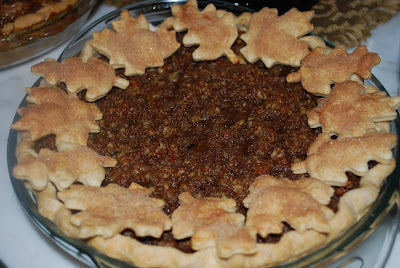 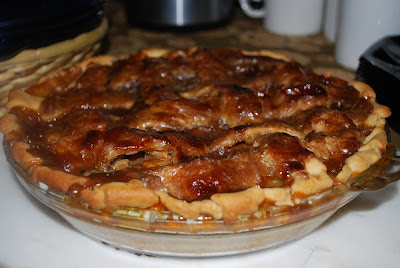 We even had a raw Sweet Potato Pie, courtesy of our raw friend Judith: 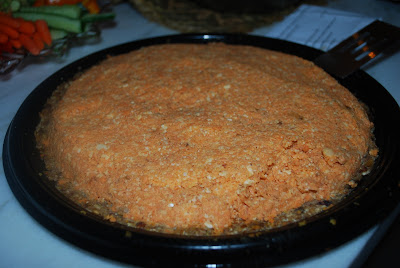 By the end of the night, I was miserably stuffed ... just how one should feel after gorging on an amazing vegan Thanksgiving smorgasboard. Now I just hope I still have room left when the real Thanksgiving comes...
Posted by Bianca at 11:10 PM

Yum! I'm getting two Thanksgivings too because I'm going to one at Animal Acres Farm Sanctuary next Saturday! It's such a good holiday, once isn't enough!

Oh how lucky you got to have a delicious pre Thanksgiving vegan feast! Everything looks delicious...especially those pies!

This all looks so tasty!

Wow, you get to have two Thanksgiving feasts? I need some vegan friends.

I'm supremely jealous!! I need to organize some awesomeness like this, so that Thanksgiving isn't a holiday to dread anymore!! :)

YUM! I'm going to a pre-Thanksgiving feast on Friday this week. It is a potluck to bring your favorite Thanksgiving dishes and share all the recipes. I may be the only veg there, so I'm planning to make a few amazing dishes and win everyone over! :)

How fun to feast with fellow veggie people. Everything looks fantastic!

Oh man, that looks so good! My friend Sam used to have pre-Thanksgiving friend thing we called "Samsgiving" that was always super fun, although not all vegan.

I was there (I made the mac n cheeze) and I have to say that the entire food selection was absolutely incredibly diverse and delicious. Bianca's Dressing and Steph's Apple Pie(I think her husband and I ate the most of that pie!) were my faves, and the generousity of Vaughan having it at his house made it even that much more wonderful. It was my
1st big gathering since moving here 3 wks ago, and everyone was welcoming, friendly, and interesting. There's LOADS of talented "cheffery" going on in Memphis!!

hooray for so much yumminess & good company, Bianca! that's so cool that your local veggie group puts together a pre-thanksgiving party - i love it, and i wish i were there to join in on all the yum! i think your cornbread dressin' looks most fantastical - and all those pies. mmmmmmmmmmmmm!

Looks like an awesome party! What a delicious feast!

What an awesome feast! So many pies! Your friend Vaughan looks a little like Billy Bob Thornton there! :-)

What a fabulous vegan feast!

Heck yes! Everything looks incredible. Way to celebrate being vegan with good friends and good food!