After spending what feels like a million hours in my car yesterday, I finally made it back home from Veganstock 2009, a PPK camping trip in Asheville, North Carolina. I had a great time, and I have tons of pics, so I'm splitting the Veganstock post into two days.

Check out the official Veganstock banner, created by the awesome Pandacookie (check out the tofu pirate in the corner!): 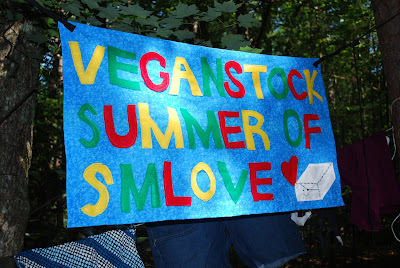 Paul (my boyfriend) and I arrived at the campsite at Lake Powhatan in Asheville around 8 p.m. on Friday night, just in time for dinner! Poopie Bitch made some delicious Italian and Chipotle Sausages from Vegan Brunch, which we ate with corn on the cob and zucchini kabobs: 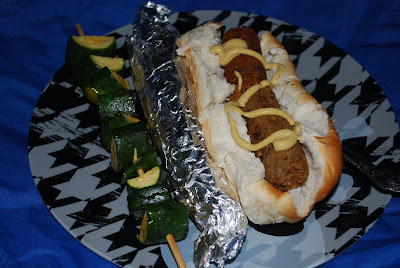 The theme of the weekend was "summer of smlove," so I brought the official Smlove Pie from the Veganomicon: 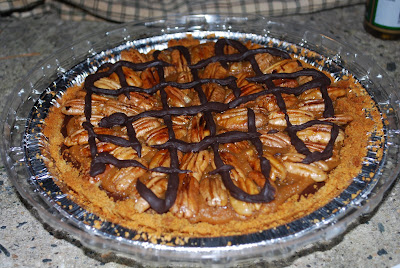 Don't Have a Cow brought this adorable (and delicious) Gay Cake: 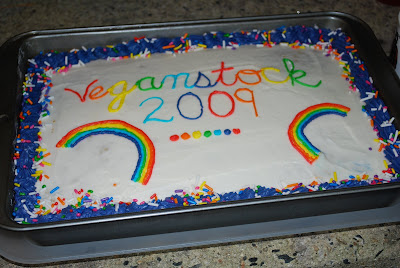 She'd originally promised vegan donuts, but didn't place the order at the bakery in time for the trip. Since DHAC's avatar on the PPK forum is a rainbow peace sign cake, everyone requested a similar "gay cake" as a substitute for donuts.

Saturday morning came really early! We spent the night in tents, and the sun woke us by 8 a.m., which was totally okay because we woke up to these amazing Cinnamon Rolls, also created by DHAC: 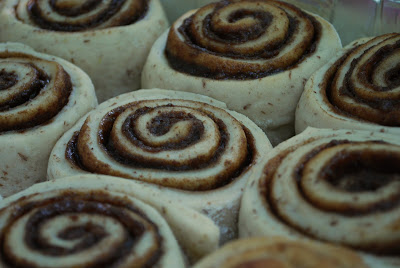 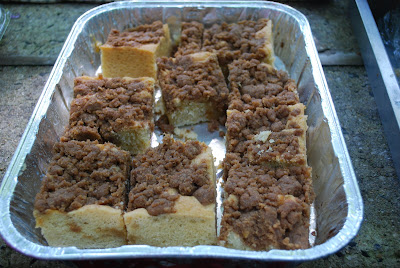 It was much larger, but this is after lots of it had already been inhaled by hungry Veganstockers.

After breakfast, we got ready for the day. Here's Poopie and I all fresh-faced and ready for fun: 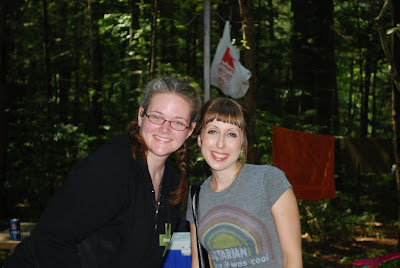 Note that this picture was taken after only one day with no shower. By day four, we weren't so fresh-faced anymore.

Paul and I spent Saturday exploring downtown Asheville with my buddy Leslie and her man Arthur. Leslie moved to Asheville from Memphis last year. The rest of the Veganstock gang hit up a waterfall and natural waterslide (which is what Paul and I did on Sunday ... we were a day behind everyone else). I'll share pictures of our downtown experience tomorrow.

Unfortunately, it started raining all crazy-like on Saturday afternoon, and the campsite was flooded. Bryophyte's tent collapsed! So everyone regrouped to dry blankets and eat Tater Pigs (which I do not have photos of ... but they're veggie dogs stuffed into baked potatoes and topped with chili!) at JohnP's house in Asheville. 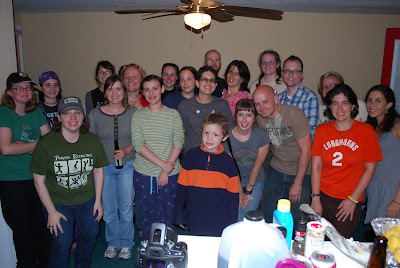 Tomorrow, I'll post pictures of the food I ate in Asheville restaurants, as well as pics of our waterfall and downtown experiences.
Posted by Bianca at 10:41 PM

Oh man, I am SO jealous! I wish I could have been there.

WOw, so many vegans in one room! Yay! Those tater pigs sound ridiculous!

That's one good-looking group of vegans. Wish I could have been there to meet you all!

Oh my god, I'm SO jealous of veganstock. If it happens next year I'm coming over.

PPK camping trip?! Love the idea! Well, I love the idea of meetin' up and eatin' up, but the no-shower-for-4-days probably would have gotten to me!!! And your Smlove Pie is just the most gorgeous thing I have feasted my eyes on today.

What fun!!! Although it sucks that it rained, it's good you guys had a place to go. I'm very curious to see your pictures of the natural waterslide, because there was a big rock slide I used to go on as a kid when we visited NC and I'm thinking it was near Ashville...the water was freezing!

the smlove pie looks ridiculously good! i can't wake to see more photos of the trip. it looks like you had so much fun!

Awesome.... I haven't been blogging for a while. So glad I came by in time to catch your re-cap! I love the rainbow cake!
-A

Man, am I jealous! Sounds like you had the most wonderful time.

that must have been so awesome. i can only dream of having a vegan convention like that. hmmmm-(((tenting fingers))) perhaps i can have an impromptu mini gathering here in btown for all the midwesty folks.

Thanks for your enthusiasm for my pie, Bianca :)
Also, I definitely am feeling better! I've been doing this one treatment for my digestion--it's just kind of awkward to talk about on my blog so I've been vague about it haha--I wouldn't mind sharing, but I don't wanna scare my readers off with TMI! lol

Can't wait to hear about where you at in Asheville! There are some awesome places to eat, we love it here!

For the Love of Guava said...

everything looks amazing! I'm not sure if this was inside the cake but i've been wanting to make a vegan version of this forever!
http://www.omnomicon.com/rainbowcake