What I Ate Last Week

So I'm a little behind posting a few dishes. I don't like to include too many meals in one post, so I saved a few of last week's eats to post tonight. I worked on my BBQ Black-Eyed Pea Burger recipe for the cookbook last Tuesday: 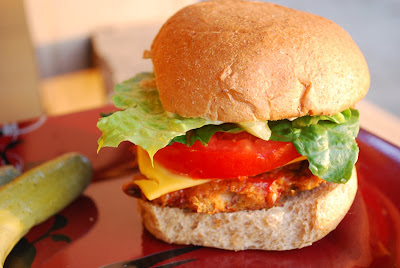 That's Tofutti cheeze atop my burger and a homemade pickle on the side. The burger still needs work though. This is the second time I've experimented with a black-eyed pea burger, but I think I'm using too much gluten flour. I like to add a little gluten to help the burger stay together, but the gluten flavor actually overwhelms this burger. I mean, don't get me wrong, it tastes good. But I feel like it needs to be just a tad tastier to be included in my cookbook.

Instead of my usual chips or fries with burgers, I made Boiled Squash and Onions to eat on the side: 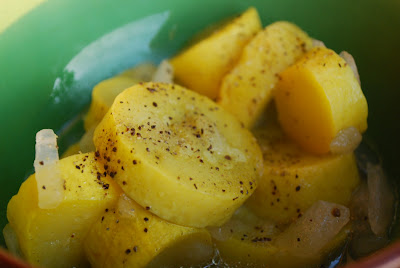 My mom used to make this all the time when I was a kid, and though boiling often zaps the flavor of veggies, it does something magical to squash. I simply boiled 3 or 4 sliced summer squash in water with minced onion, salt, pepper, and a generous pat of Earth Balance. Then I seasoned the squash with Cavendar's Greek Seasoning and green hot sauce on my plate.

I also made a deeeeelicious recipe from The Vegan Table last week — the Penne Pasta with Fresh Veggies: 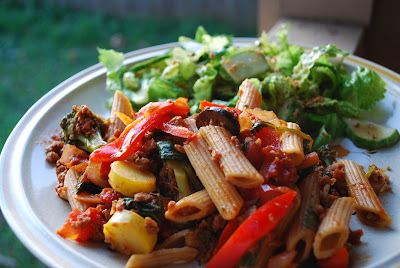 The recipe calls for quite a few veggies — broccoli, red bell peppers, spinach, squash, olives, and fire-roasted tomatoes — tossed with whole wheat penne pasta. And it also calls for vegetarian sausage. The recipe recommends using Tofurkey sausages, but I opted for Trader Joe's Soy Chorizo. Though the chorizo sausage was crumbly and not sliced, it really added a tasty element to this fresh summer dish.

Also, if ya'll saw my last post about MixMyGranola, you should know that the French vanilla granola base I chose is apparently not vegan. Boo hiss! Tanuki.gao commented on that post that I should check the ingredients on the company's website, and sure enough, it contains honey and whey. But all the other granola bases they offer are vegan! I should have checked that out first. Oh well, I'll finish what I have because I don't like to waste. But next time, I'm gonna pick a different granola base.
Posted by Bianca at 11:19 PM

Ooooh! You might say that burger needs a bit more work but I say bring it on! Sounds delicious! Homemade pickle - YAY!

Ahh too bad about the granola base :-(

Too bad about that granola!

But everything else looks SO good! Come and cook for me girl!

Wow Bianca, everything looks amazing. I hope your burgers get better, sometimes it just takes a lot of tweaking for some of the recipes to live up to their potential.

Your simmered summer squash sounds simple and fantastic too, I love light tasty meals when it is hot outside!

I've heard other testers rave about your burgers so I can't imagine they need any tweaking. It sure looks good and so does the pasta. My mom used to make boiled squash too, but I'm thinking I hated squash way back then. Maybe I'll give it another chance.

Shame about your granola, it's so annoying hen you accidentally buy / eat something non-vegan!

On the plus side that burger looks really really great!

That pasta sounds really good. I love pasta dishes that are loaded with veggies. Too bad about your granola not being vegan. Despite that, the mix you came up with sounds awesome though. There's so much stuff in it!

Your burger looks great for a summer dinner!

My mom and dad are making a different pasta recipe out of The Vegan Table tonight for a dinner party--good to know that yours was yummy (p.s. is it just me or are there A LOT of similar tomato-y vegatable-y pasta recipes in TVT? It seems kinda repetitive..haha but I shouldn't judge before I make them all!)

That's how my Mom used to make squash too, so yummy!

I'm sure you'll perfect the burger soon. Hey, if I'm out of the country when you get your cookbook out will I still be able to get it?

I love to cook squash and zucchini like that :)

That pasta looks fantastic! I love me some soy chorizo, it's so delicious. And I'm excited about that veggie burger.

I hate it when things that would normally be vegan have whey or something in them, it's SO ANNOYING.

holy smokes that bbq burger sounds so delicious :) and the pasta!? amazing! love all of the veggies!

YUM!!!
I'm sure the burger is fine. But I HAVE discovered that smoked paprika is the wonder-seasoning that takes foods from "so-so" to "WOW!"... of course I have no idea what's in your burgers but they look great!!
My Mom cooked squash JUST like that. I like just a little nutritional yeast on mine with the Earth Balance.

supersadface on the granola, Bianca! that stinks!

i cannot wait to test out your burger recipe! it sounds and looks soooooo fantastical! sometimes dan & i used a flax egg or two in our bean burgers & pulse up the veggies in the food processor - helps them stick just a bit better or somethin'. rock on with the homemade pickle! i need to try the tofutti cheeze sometime as well. i see it around, i just keep forgetting to give it a whirl.

hooray for trader joe's soyrizo - i love the stuff. first time we tried it i guess i just didn't think that it would be crumbles as the packaging kinda tricked me. i love it so much though - it didn't even matter! the pasta looks colorful and awesome!

now i'm gonna have to make some boiled squash to smother in e.b! mmmmmmmm!

I'm impressed by your homemade pickle.

i love home made veggie burgers over the commerical ones. they freeze well too.

Sorry about your granola!
Maybe you could use a different flour (like chickpea) as a binder for the Black Eyed Pea burger? Then it could be gluten free as well?

I want squash! My Mom used to make it like that too and I haven't had it in a long time! Maybe a trip to Kroger is in my future...