Bow to the Devil Dog!

I'm about to show ya'll somethin' crazy awesome. And I have Jewbacca of Pain in the Ass Vegan to thank for it all. Behold, my new favorite food — the Diablo Dog: 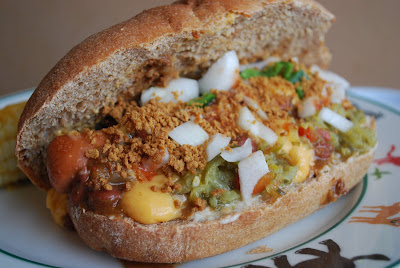 This monstrosity of a veggie dog dish contains a not one, but two Yves veggie dogs, Amy's vegan chili from a can, nacho Teese sauce, my Granny's homemade dill relish, onions, jalepenos, Frank's red hot, horseradish sauce (made from mixing horseradish with a little vegan mayo), and fake bacon bits. And it's all nestled inside a homemade whole wheat hoagie bun, which I made using HappyVeganFace's Whole Wheat Bun recipe.

Jewbacca's sinfully delicious delicious dog was inspired by an episode of Strangers with Candy, and as a huge Amy Sedaris fan, I think that makes it taste even better. You must make this dog. You won't regret it. For instructions (and a little diablo dog preachin'), check out Jewbacca's step-by-step picture post.

On the side, I knew I'd need something a little more healthy to make up for all the processed, cheezy sin I'd be stuffing into my mouth. So I boiled a little local corn on the cob and covered it in the Garlic-Miso Dressing from Vegan Soul Kitchen: 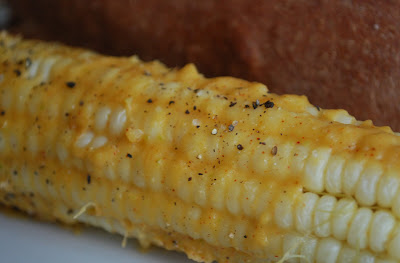 Another winner from Bryant Terry! This dressing is so much better than butter. In fact, I doubt I'll ever slather Earth Balance on corn again. This recipe is healthier and tastier.

Now, go make yourself a Diablo Dog. You can atone for your transgressions later.
Posted by Bianca at 11:19 PM

Yum, almost a Chicago dog, except they use pepperoncini instead of jalapenos and sprinkle it all with celery salt!

You just made my jaw hit the floor. That dog is INSANE! Wow. You've got all my favorite food groups piled in the bun, hyuk hyuk! Seriously, what a thing of beauty.

I'm intrigued by this garlic miso sauce, it sounds delicious!

yayayayayayay! thanks for honoring the diablo dog. jeri blank would give you a high five right about now. ((((muah!)))))

Oh and the garlic miso sauce looks so yummy!

My favorite thing to do with corn is to grill it and put cilantro vinaigrette on it:

Process everything except olive oil until chopped fine; then add olive oil in stream.

PS. I'm convinced you've got the best blog name in the world. I crack up every time I read it!

That is one loaded down veggie dog, with lots of spice and fire, nice.

Wow, that is quite the hot dog!! And alongside some corn? Perfect.

oooooh, Bianca! your devil dog looks outstanding! mmmmmmmmmmm! so much awesomeness on a bun - wowzers! i super love strangers with candy - and amy sedaris cracks me up! (i love her brother's books, too - that's one funny family! w00t!)

we're at the beach this week for sand & sun - man, i wish i had your devil dog right now (franks is my absolute favorite hotsauce). it would make the day on the beach that much more glorious!

thanks again for the shout-out, my friend! your hoagie looks super stellar! totally gonna check out Jewbacca's post - superw00t!

Oh my, I would need a nap after that devil dog. It looks crazy! Corn on the cob sounds like a perfect side.

that diablo dog. HOLY HELL. no comment. except for you are one impressive vegan. garlic-miso dressing sounds divine. too bad i don't have vegan soul kitchen!

Wow, it's stuffed so insanely full! Good freaking job! Looks like the perfect dinner for a summer evening :)

Wow that corn looks so good!!!

woaho, that is gnarly. Looks so good.

Whoa. Both that dog and that corn look freaky good. I definitely need to try this.

That's easily the king of any chili dog I've ever seen. I bow down.

That's a tasty looking topping for the sweet corn too. Great combo of summer foods...definitely makes me want to grill some veggie dogs and get started.

i have been craving those dogs ever seen i saw them in jen's blog... looks so rockin'!

and yum for the miso-garlic.. a must try!

I'll have to try the Diablo dog after looking at that picture!

I just picked up some veggie dogs and am so excited to try this!! Looks great :D

Bianca, that dog looks incredible! Now that's the way to eat a vegan hot dog. And thanks for the tip on the dressing. There are still many recipes I haven't tried yet from that book!

That is one intense dog! I think my boyfriend would be in heaven if I made him one of those.

I am finally getting around to checking out your Asheville/Veganstock pictures. I love the group picture from JohnP's house!

That is an amazing pic of good food :) And the corn - *drool*

that hot dog looks ridiculously good and i want one now.

That looks so yummy!