I want to tell ya'll all about the New Kids on the Block concert I went to last Thursday, but I'm gonna save that for tomorrow's post. I gotta meet some friends for karaoke night at Dish in a few minutes so I don't have much time. But I do want to share these pictures of my Coconilla Cream Tarts: 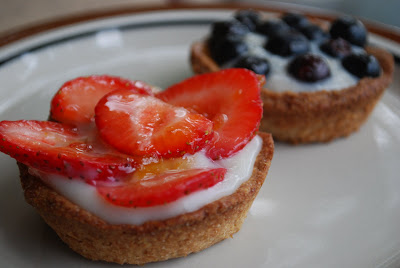 These patriotic blueberry and strawberry mini tarts were adapted from a recipe in the May/June issue of VegNews. The recipe was actually intended for a whole pie, but oddly, the photo illustration with the recipe showed mini tarts. 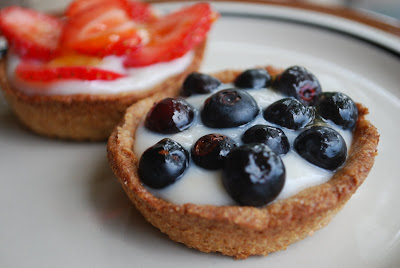 I figured small bite-sized desserts would be more appropriate for the Fourth of July party at my friend Cindy's house. So I made the crust according to the directions provided, but used a biscuit cutter to make small circles. Those little crusts were pressed into a cupcake tin, baked, and then filled with luscious coconut vanilla cream and fresh fruit.

They were a hit at my friend's party. Cindy hosted a gathering of about 15 to 20 people at her home, which is situated along a lake in Bartlett (about 15 miles from my Memphis home). We shot off some fireworks and watched all the neighbors shoot theirs off. It was fun, even though I'm not much of a patriotic kinda gal. My appreciation for the States is a little better now that we have a decent president though.
Posted by Bianca at 9:40 PM

Be vegan!! Check out this new website - many members in it, like me, are vegan, and theres groups for it!

you get your own channels!! Lets get more people hooked on veganism!

Those mini-tarts are so cute! I love tartlettes, and fresh berries make them even sweeter!

beautiful! yeah, that's what i said to my friend too (about this being the first 4th of july that meant anything to me!)

mini tarts rock! your coconilla cream tarts look too cute and sound sooooo gooooood! glad they were such a tasty hit at the get-together, and i'm glad you had a fun 4th too, Bianca!

can't wait to hear about all the NKOTB fun! yay!

They look so cute! Can't wait to hear about New Kids!! :)

Happy 4th of July! After living in the states for a few years, and now living out of the states again, I have a very fond appreciation for the country. It is an amazing place (with problems, of course, just like everywhere) but I appreciate it and the freedoms it allows so much now that I don't live there anymore.

I have that recipe marked for a rainy day (or any day I feel like eating a slice of heaven). haha

Oh those are just precious! I'm not surprised they were so popular!

Wonder if you could sub coconut yogurt as a shortcut?

Wow those are gorgeous and they sound fantastic Bianca!

I'm not usually one for state sanctioned holidays but with a halfway decent person in the White House it certainly is less EMBARRASSING to be an American now, eh?

I love coconut. Who needs a holiday to make such an adorable dessert?

this was the best 4th i've had in oh... about 8 years. ;) those tarts look perfect and delicious!

Your coconilla tarts look cute AND delicious! Making mini pies was a great idea for a party, I'm sure they were much easier to serve. (People always seem to love miniature foods anyway)

Those are so freaking adorable! I love them, so pretty.

these look AMAZING :D
so patriotic!

Can't wait to hear about the concert!:)

Great idea for 4th of July food - the colors are brilliant. I've been trying to think of food I can bring to an upcoming family reunion, and this might be the thing.