I've never signed up for a CSA share, mainly because I fear receiving a mystery box of produce each week would take away my freedom of choice at the farmers market. I like choosing which fruits and veggies to buy rather than having them picked out for me.

That being said, for a couple of weeks this month, I'm sharing a friend/co-worker's CSA share while she's in Germany. I picked up my first bag of produce from Downing Hollow Farm last Wednesday. Inside the bright green reusable tote were potatoes, shitake mushrooms, slicer tomatoes, multicolored heirloom cherry tomatoes, green beans, Swiss chard, basil, mint, and dill. Maybe this CSA business is alright!

On Friday night, I used some of the cute little tomatoes for this Swiss Chard and Rainbow Tomato Whole Wheat Pasta Toss: 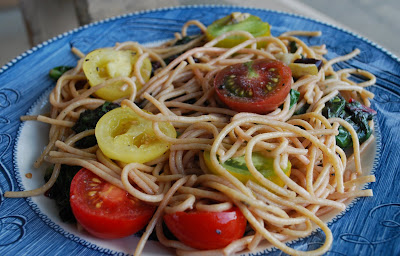 Tonight I used the shitake mushrooms in this Tom Yum Soup: 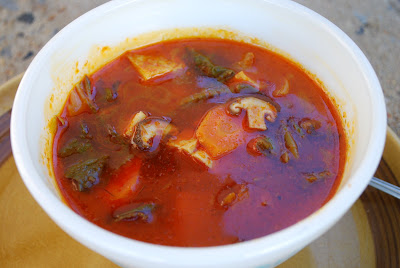 The soup base is from a jar of veggie tom yum paste I picked up at an Asian market. Other ingredients included fried tofu, dried lemongrass, shitake mushrooms, bok choy, carrots, and rice noodles. Yum yum!

On the side, I had a Whole Wheat Steamed Bun: 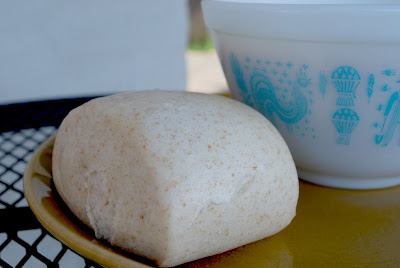 I was so excited when I found whole wheat steamed buns at the Asian market by my house. I love these things, but so often, they're made from nasty old white flour. This wheat roll tasted so much better, and it was much healthier.
Posted by Bianca at 11:07 PM

Haha, I have the exact same paranoia about CSA boxes and the limitation of my cooking freedom! It's kinda funny, and sad. :)

I've never heard of a steamed bun. What are those? I'm so intrigued!

Everything in your post looks fresh and delicious. Especially that pasta!

It is a great deal you have worked out with your co-worker, good idea!

The produce sounds delicious and you made such fresh and beautiful meals, love the look of that gorgeous summer pasta.

that pasta looks awesome, it all does.

How great! Pasta and tomatoes is also one of my favourite summer meals.

Steamed Buns?! I've never heard of them, but they sound delish!

I have a half CSA share. I pick it up on Friday, and by Tuesday's farmers' market we've eaten all the produce and I can still buy whatever I want. I haven't found it to be a problem. Sure, some weeks I wasn't planning to cook with chard or garlic scapes whatever, but I've discovered some neat veggies in my CSA bag that I wouldn't have tried otherwise. It encourages me to get creative. Plus to feels good to eat according to what's growing on one farm each week.

hooray for getting to share some csa goodies! we loooove our csa, although ours is different in that we get to pick out what we like & take it home.

your pasta looks so good, Bianca - hooray for the heirloom cherry tomatoes! i bet they're so super delicious! score on the whole wheat steamed buns, and your tom yum soup looks awesome! i love the color!

I have the exact same CSA paranoia! I'm always worried that I wont know what to do with all the veggies and I'll just eat chips all week and waste all the veggies! I think I should just get over it and sign up!

That Tom Yum soup looks so delicious! The surprise veggie aspect is actually one of the things I like about my CSA - it's like a present every week! Of delicious vegetables

I have to admit that I do feel like getting a CSA share stifles my cooking choice a little, but it also inspires me in so many ways that I don't think I'll ever give it up. Plus, there's no easier way to guarantee that you'll always have seasonal, organic produce. Love it!

I thought the same thing about CSA boxes, but I like the idea of somebody deciding for me what to cook for a week :) - sounds like you received lots of good stuff. A temporary share sounds like a good intro to the CSA idea. Would love to try the steamed buns too...I'll have to check the markets here, since they're always coming up with good surprises.

a great find for panda fanatic!
my roommate and i LOVE this bag
hkpanda.freetzi.com

I would love to get a CSA box. It is fun to not know what you are getting right? Right?
Those whole wheat steamed buns look great.
You pasta dish looks delicious and light, a perfect summer dish

I just read about swiss chard today in Women's Health and was going to post about it because I'd never heard of it! they talked about it as a superfood/superveggie. it looks good in your pasta!...yummm

I'm the same way, I LOVE a good Farmers Market, but your CSA share looks pretty good to me!