For the past couple of nights, I've gone on a bit of an exotic staycation with vegan fare at the house. Monday night, I took a trip to Holland with this Fried Potato and Cheeze Soup with Grilled Onions and Bread: 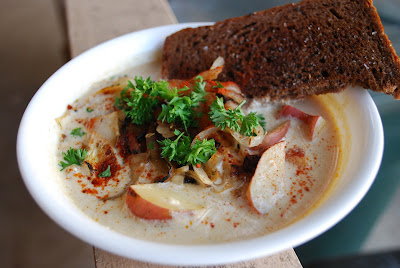 I didn't really know that cheese soup is Dutch, but the recipe came from punk rock vegan chef Joshua Ploeg's Dutch Much?: Fun Excursions in Vegan Dutch-American Cooking. If you 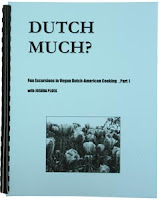 've never heard of Ploeg, you should check out his books here. He's a traveling vegan chef who couch-crashes and leads cooking demos in his host's home. He cooked a four-course meal at the local DeCleyre Cooperative house here in Memphis a few years back and I bought one of his DIY-style spiralbound cookbooks then.

This cheeze soup is fantastic! It's the second time I've made it, and I'm sure I'll make it again and again. The base is nooch, vegan cream cheese, soymilk, Dijon, and some other stuff. The potatoes are fried and the onions are caramelized. The bread is fresh pumpernickel I picked up from a German bakery in Clarksville over the weekend. Yum!

On Tuesday night, I took a trip to Vietnam with these Spring Rolls with Peanut Sauce from The Vegan Table: 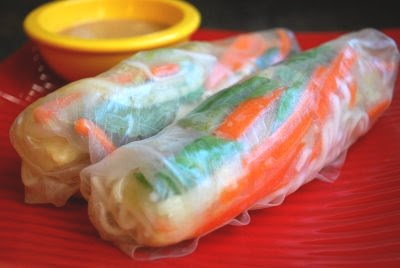 I've never followed a recipe for spring rolls, but I love Patrick-Goudreau's addition of sweet basil and mint. I hate, hate, hate Thai basil, and when I order these things in restaurants, I always pick the basil out. But the combo of sweet basil and mint was much easier on my palate. These also contained tofu (dredged in cornstarch and fried in sesame oil), rice vermicelli, carrots, cucumbers, hoisin, and sriracha.

For the peanut sauce, I followed The Vegan Table recipe but subbed Pbu for straight peanut butter. Yum!!!! I ate these with streamed vegetable buns (from my freezer) and a salad with Jessy's Orange Miso Dressing.

Tomorrow night, I'm going to see the New Kids on the Block at Mud Island Amphitheater!!! Yep, my fifth grade dream is coming true. I'm sure I'll be too starstruck to post tomorrow night, so I'll see ya'll Sunday!
Posted by Bianca at 11:55 PM

ooh NKOTB!! hahaha, i was tempted to get tickets for them when they toured here too. I used to have such a thing for Jordan Knight!

I love spring rolls and I love Donnie Wahlberg. Lucky you!

that looks great! i love crusty punk couch surfing vegans that cook for me.

I love the idea of using Pbu in dipping sauce. Awesome. Actually Pbu in any kind of peanut sauce would be good....I like your style Bianca :)

That soup looks SOOOO good!!!! Even with all the heat outside right now I could go for that!

cheeze soup?? that sounds amazing..
i miss good creamy "cheese" filled soup...haha and that looks really good! :)
spring rolls are just too amazing too...probably one of my favorite things when i eat asian cuisine!

Wow.... you've been busy this week! The spring rolls look wonderful but the soup is so different and cool sounding!! Loved seeing it!
-A

I've heard about that guy, I'm so jealous you got to eat his food. And now I totally want his cookbooks. (Like I don't have enough cookbooks already!) Those spring rolls look great too, I love spring rolls.

staycations = my favorite, Bianca! oh my word, that potato, cheeze, ‘n onion soup – mmmmmmmm! i need to try it! spring rollz are just too goooooooood (peanut sauce rocks so hard! i just want to put it on everything!), and hooray for the orange miso dressing – i hope you liked it! :) huzzah for NKOTB! happy 4th of july weekend, Bianca – have fun!

p.s. - i forgot to tell you about our experience with the dr. cow cheezes. yeah, up front they had just a tad bit of tartness to them - a sharpness almost, me thinks. dan and i used to loooove us some "stinky cheeses" back in the omni days and what we were tasting in the dr. cow reminded us of those super aged ones from way back when. we had the aged cashew cheeze - the hemp 'n cashew sounds good, too! i'd love to try that. i see they have some with green algae and i'd love to try those, too! i really like the cheezes the more i have them! mmmmmm!

I have been craving tofu spring rolls with peanut sauce all day... Are you reading my mind or something?! You know, those look so fantastic and fresh. Yum.

Fried Potato and Cheeze Soup?? what an eye-catching concept, I stopped everything to peep it :-)

The cheezy soup looks great, and I can't wait to check out a vegan Dutch cookbook - thanks for the link! Vegan Table is on my shopping list too, and the spring rolls look wonderful - perfect summer food. Joy of Vegan Baking is my go-to baking book, so I was excited to see she has a new one.

I'll be staycationing this summer as well. I love the idea of voyaging via food though!
So want the Vegan Table!

I must have that soup recipe! It looks so delicious! Does the vegan cream cheese melt in the soup?

Never would have thought that Dutch food could be veganized, what with all the cheese, lard, and cream. But that looks delish!

And those spring rolls look amazing... still too nervous to try my hand, but one of these days.

That soup looks like its made of dreams instead of ingredients! That sounds so fantastic and like the perfect comfort food!
http://whatyourmommadidntknow.blogspot.com/

Cheezy soup? Would broccoli go good in that?
The spring rolls oh how my son would love those. great job!

that soup looks delicious! Hope you have a great 4th.

This soup sounds so comforting, and how interesting that it is dutch!

That soup sounds delicious! I don't know much about Dutch food so I may have to check that book out!

You are living out both of our 5th grade dreams :-)

Hi Bianca
That looks really good! I remember Memphis!
Thanks for posting it, nice when things yield results I like to know- hope you're well
Joshua