Yesterday, I did my monthly raw food cleanse, and for the first time in the year or so I've been doing this one-day, all-raw cleanse, I didn't crave cooked food all day! I'm attributing this to the super hot summer temps, as well as the tasty eats I noshed on throughout the day. Breakfast was a Green Machine Juice: 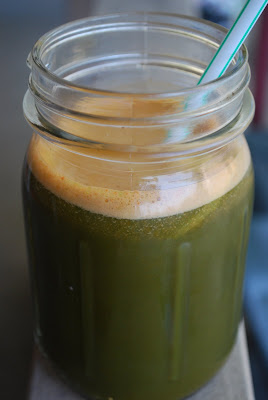 Inspired by Jessy's ACT green juices at happyveganface, I juiced half a bunch of kale, half a pound of carrots, two stalks of celery, half a red bell pepper, a handful of parsley, and a bit of fresh ginger. All that stuff made this little jar of juice! And it was quite tasty, but not so filling.

Luckily, I brought plenty of snacks to the office, like these bell peppers and Raw Satay Sauce from Alive in 5: Raw Gourmet Meals in Five Minutes: 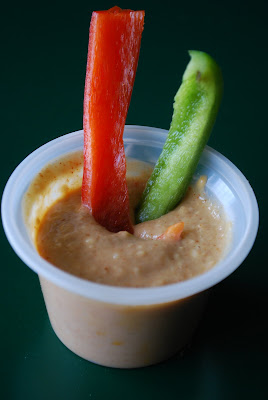 This peanut-free satay gets its tastiness from miso and tahini. It was so good with these pepper strips. I ate a whole bell pepper with the dip at around 10 a.m. And of course, I was starving again by lunch, so I ate this yummy-nummy Live Gazpacho from Vegan Fusion: 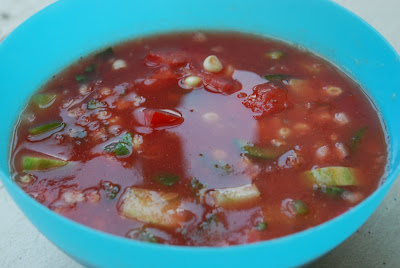 The recipe was a raw variation on an otherwise cooked recipe (the original called for fire-roasted tomatoes and roasted jalepenos). I believe this may be my favorite raw meal to date. All the summer goodness is combined into one awesome bowl and spiced with cumin and chili powder!

I ate this Cucumber Salad with Mustard Seed Dressing alongside my soup: 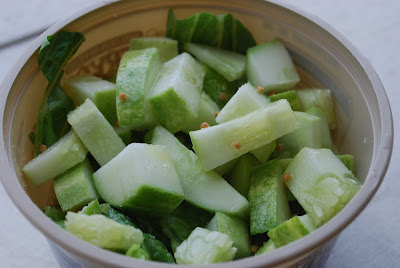 The dressing recipe is from Ani's Raw Food Kitchen. I've made it several times, and I think it's my favorite uncooked salad dressing — just olive oil, apple cidar vinegar, agave, and mustard seeds.

Due to the lack of carbs, I was hungry again by 2 p.m. So I snacked on fresh strawberries, blueberries, and some O.N.E. Coconut Water at my desk: 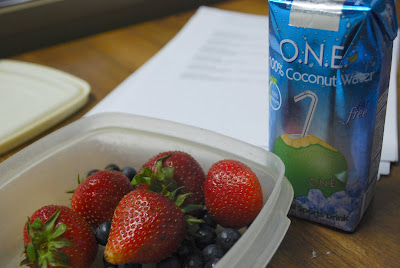 The coconut water was kinda weird. It was just straight, unsweetened coconut water, but I guess I'm used to the creamy coconut milk. That was what I was expecting. It was fun drinking out of a juice box though.

Before my afternoon workout, I hungrily downed this Peanut Butter Cookie Larabar: 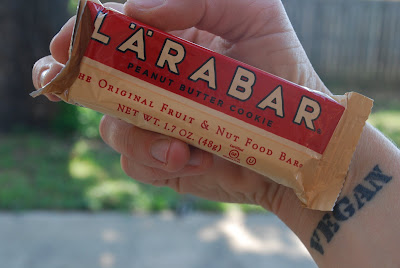 Now, I know this isn't technically raw, but the label says it's 60% raw and that's enough for me. I'd been dying to try this flavor since I'm not able to find it in Memphis for some weird reason. I bought this one in Nashville a few weeks ago. And I gotta say, this is the BEST Larabar flavor ever! Even better than my previous fave, Coconut Cream Pie.

Dinner was the Save the Tuna Pate Wrap with Garlic Cashew Aioli from Ani's Raw Food Kitchen: 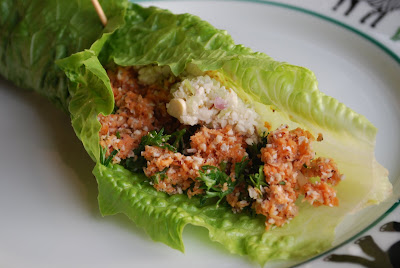 It was just okay. I never liked real tuna, so I'm not sure why I made this. I think I just wanted an excuse to use the dulse flakes in my spice rack. The "tuna" is made with sunflower seeds, carrot pulp (from my morning juice), celery, dulse, and some other stuff. I subbed romaine hearts for the collard leaves because I'm not crazy about raw collards.

Finally, I snacked on these Mini-Pecan Pie Date Wraps for dessert throughout the day: 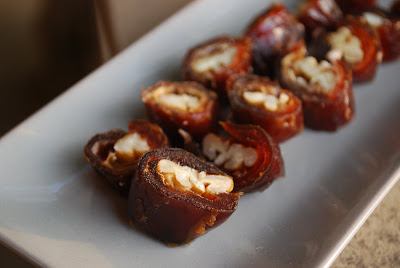 My raw friend Judith made these for her Summer Solstice party a few weeks ago, and they were so yummy I had to make my own. It's simply a date, pitted and sliced on one side, and then stuffed with a raw pecan. Since I rarely finish an entire raw pie or other dessert, these bite-sized treats were perfect!
Posted by Bianca at 9:26 PM

I'm so dumb I didn't even realize miso was raw. I guess that's what "fermented" means, huh?

That coconut water is my favorite, and its supposed to be super good for you- as is everything in this post! Summer is so great for eating simple and delicious combinations.

Every time I read your raw posts, I wonder why I don't get around to making raw food more often - it all looks awesome. The raw satay sauce sounds really good, and I love those little stuffed dates. Dates dipped in peanut butter is one of my fave snacks. Definitely need to do more raw food this summer - the live gazpacho sounds wonderful too!

*smacks head* I'm on day 8 of a raw/juice only fast, why didn't I think of the one day a month plan?!

Awesome and everything looks so good!

Everything looks good! It's been hot (for Alaska) so I've been craving more raw foods, and your post gives me a lot of good ideas!

I'd be craving only raw foods too if they looked that good!

I made juice this morning but I really didn't like it. First it was too grassy, then too sweet. Hopefully I can find a good balance.

Every time I read one of your raw food posts I am amazed at how good it all sounds.

I LOVE dates stuffed with nuts! (I like almonds best) I'd prefer to eat that over a cooked dessert any day.

I realised that we had a juicer at home recently and I have been juicing everyday. That green juice looks great as I love to drink my veggies.

My husband shocked me the other day by asking "What do you know about this raw food stuff?" He said he feels greasy and gross and wants to try a cleanse. He never pays attention to food or nutrition, he just eats what I put in front of him, so I was really surprised to hear that he was thinking about these things. Like, I don't even know where he would have heard of a raw food cleanse. So I guess we're going to try to do a few raw days soon! I'm a little nervous because it looks really labor intensive. I'll definitely consult your posts for ideas. Gazpacho for sure!

Everything looks yummy! I especially like the looks of those nut-stuffed dates :-) Glad to hear you weren't craving cooked food this time around... hopefully it's the start of a change?

Wow, even on your raw day you really managed to feed yourself well, it all looks great. I am especially partial to your gazpacho lunch, that looks and sounds fantastic!

How is the Alive in 5: Raw Gourmet Meals in Five Minutes cookbook? It *sounds* really nice...one thing I don't like about raw cookbooks is that every recipe is so complicated and takes so long to make!

All of that raw food looks so good! Especially the gazpacho - yummy!

hooray for your rock’n raw cleanse day, Bianca! that’s super stellar that you didn’t crave any cooked foodz! hellz yeah, my friend! isn’t it crazy how much goes in to the juicer and how little juice ya actually get? i’ve been juicing some BIG cucumbers lately and they help with more juice, but i’ve gotta get some kale to juice – nice! the raw satay sauce looks amazing! peanut free & super tasty, too?! w00t! i was just telling Jessica over @ awesome. vegan. rad. that i’ve never had gazpacho before; i’ve gotta make me some! vegan fusion is on my amazon wish list – i really need to move it into my cart & purchase it! oh man, i need to make that gazpacho! cucumbers are so delicious. i can’t believe i used to dislike ‘em. the o.n.e. coconut water is my fav, and yeah – it totally caught me off guard the first time i tried it as well. i love it in smoothies the most though! (the pb lara bar is my personal fav, too!) i tried that pate a few months back when i bought ani’s book and also was unimpressed.

running off to make myself some pecan pie dates wraps right now! (i think i may have to put a smear of almond butter on top of them for extra yumminess!)

that soup looks so delicious :)
yayy for pb larabars being raw enough!
Have you tried organicraw bars? the Chocolate Coconut one is amazing!

What a huge variety of dishes you packed into your cleanse day! The soup is so colorful too.

I highly suggest dipping some baby carrots into that Alive in Five Satay Sauce! Heavenly!!!
-Natalie

Very tasty eats! I like the sound of the raw tuna lettuce wrap.

now that i've won that mega machine, i'll be eating more raw stuff. i'll have to see about checking out a raw cookbook at the liberry. and i'll agree with T, i didn't know miso was raw. what about bragg's and nooch?