I used to hate lima beans ... probably because kids are supposed to hate them. I also hated onions, mushrooms, and hominy. I was obviously crazy, but I've since come around. Being vegan will do that to you. Since I've only known about my lima love for a few years, I'd never tried succotash ... until last night when I made Lima Bean Succotash from More Fabulous Beans by Barb Bloomfield: 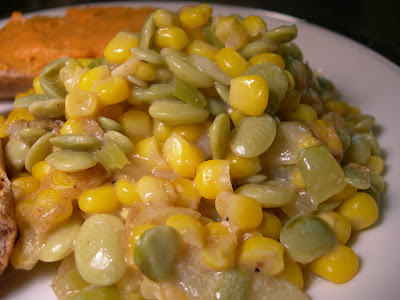 I used baby limas that I hand-picked earlier this year at Windermere Farms, a small pick-your-own organic farm in Memphis' Raleigh neighborhood. I shelled the beans back in September, but didn't have time to cook them right away. So I froze the beans for later use.

The recipe is a little different than most succotash recipes I've seen. It's b 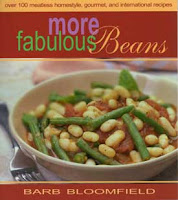 aked with flour, soymilk, and chopped celery and onion. I think most succotash dishes are cooked on the stovetop. But Barb is an awesome lady, so I trusted her version would be delicious. Barb lives on The Farm in Summertown, Tennessee (an intentional community of vegan hippies located about three hours from Memphis). When I visited the The Farm last summer (read about it here in the Memphis Flyer), I stayed with Barb and her husband and she cooked some WONDERFUL food!

The succotash was creamy and the tender baby limas almost felt (and tasted) like edamamme. I'm glad I have plenty of leftovers!


This weekend, my friend Sheridan gave me a copy of The Uncheese Cookbo 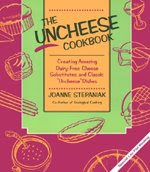 ok by Joanne Stepaniak! I've been wanting that book forever, especially after seeing all of Veganifer's yummy posts about Stepaniak's creamy cheeze sauce. It also doesn't hurt that The Uncheese Cookbook was also published by the folks at The Farm.

Since I had all the ingredients on hand, I whipped up this Herb & Tomato Cheeze Spread to smother on some crusty bread as a side to my succotash: 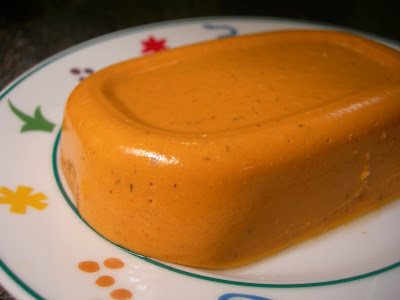 I love how it molded to the shape of my Gladware! It's not as hard like a brick cheese, but soft and spreadable. It reminds me of Cheese Whiz, only with thyme, dill, and tomato added. I served it on whole grain bread — the perfect side dish to my tasty succotash! 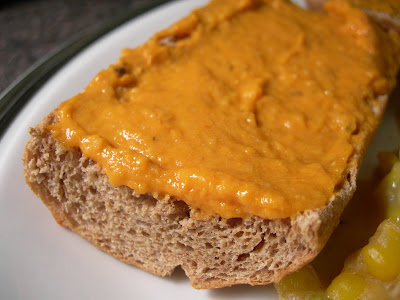 Thanks for the cookbook info! I have the Uncheese one, but have only gotten around to 1-2 recipes. And I hadn't heard of the Bean cookbook.

that looks sooo tasty, anything with sweetcorn in gets my vote!

Fabulous cookbook information!! Love the title of your post, since it reminds me of Daffy Duck :-D

i've also wanted the uncheese cookbook. i had succotash about 15 years ago and it was just lima beans and creamed corn cooked on the stove top. i'll have to see if my liberry has those books!

Yum. I need to try both of those recipes!

I've never had succotash and don't believe I was ever a huge fan of lima beans. But there are so many things that I now love that I used to despise (pumpkin, mushrooms, olives, sweet potatoes, etc) that I should probably try them.

Thank you for the review of that Uncheese. Jessy (from Happy Vegan Face) sent me the Uncheese Cookbook to borrow and I can't decide where to begin!

that cheeze block looks so funny!
i LOVE lima beans. i used to hate them when i was little, but succotash converted me to a lima-lover.

I love the Uncheese cookbook! Joanne Stepaniak is a genius, and there are so many great recipes in there.

I've never had succotash before but I think that's going to have to change very, very soon ;)

As much as I love that cookbook, I still have yet to try one of the molded cheeses! Yours turned out beautifully! Maybe I'll try one of those out after my kitchen is back in working condition.

I've never heard of a baked succotash, but it sure does look good!

Succotash is a great name for something so simple. Do you think I could use regular lima beans as well?

Cheeze spread, mmm. It looks like a spread that I buy in the supermarket, but I'm sure this one's 1000 times better :-)

i wondered what happened to those lima beans! hooray for a tasty succotash - it looks so creamy & yummy!

the cheeze spread looks rock'n too, Bianca! wow! i need some un-cheeze in my life! mmmmmmmmm!

your food and photos always look magical. I swear one bite of anything you made could cure the world. You have a gift!

Yum! Both of those look delicious. I may have to try that cheez spread - I have the Uncheese Cookbook, but I haven't made a ton of stuff from it. (I do really like the nacho cheez from it. And the betta feta.)

That cheese is molded so perfectly! I want it!! I've been wanting to buy the Uncheese Cookbook, I guess I should get it!
I've never had succotash, but you've certainly made me want to try it!

I love limas too. This week I made the "Chickpea Tagine with Cinnamon, Cumin and Carrots", in the October issues of Vegetarian times. But instead of chickpeas I used Limas. It was great!

I haven't had succotash in ages, and now I'm craving it. Yours looks delicious!

Is the uncheese cookbook worth buying? I've heard mixed reviews but I've seen some on blogs that look absolutely delish, like that cheese!

I just commented on your later "uncheese" post. I see now that you have a different version of the book. I have the "Ultimate Uncheese Book". Maybe that's why mine has the measurements for agar powder and yours doesn't. Anyway, I have never made the herb and tomato spread. I just looked up the recipe in my book. It's next on my list! If you ever try the pies/cheesecakes I would suggest using LESS agar then the recipes call for. Some say 3 T flakes or 2 t powder. I use 1 teaspoon powder and I love how they come out. With more it's just too rubbery for a pie.