Inside My Messy Freezer

I was tagged by Chelsea of Ramblings of a Native Vegan Mecca Girl to show the inner workings of my freezer. Now, before you look at the picture, let me warn you ... it's a little disorganized. I'm typically a very organized person (even bordering on OCD), so letting ya'll into my messy freezer is a little like having company over the house the day before cleaning day. But since you are all good friends, I'm sure you'll overlook the mess, right? 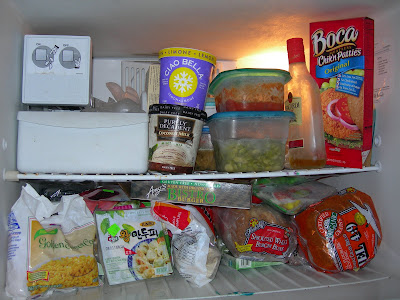 Everything is pretty much crammed in here, but it's your typical vegan freezer — Ezekiel Bread and Buns, Boca Chicken Patties (the vegan ones), Amy's Bistro Burgers, Purely Decadent Coconut Milk Chocolate Mint Ice Cream, Ciao Bella Lemon Sorbotto (THE BEST STUFF EVER!), frozen veggies and containers of frozen meals from the recent past. And of course there's the almost-empty bottle of Bacardi 151.

I also took a shot of my inside freezer door, but it was REALLY unattractive ... all frozen veggies in plastic baggies crammed this way and that. So I'm not showing that one.

Since my fridge much more organized than my freezer, I'm going to show you that too. But in exchange, I'd like to start a new meme asking any willing participants to bare their fridges as well.

Here's one shot (click on it for a closer look): 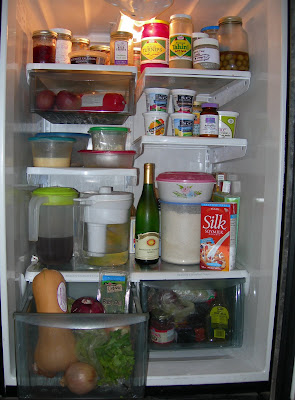 Top shelf is mostly jams, spreads, relishes, and pickles. Notice the big pink jar of pickled turnips next to the tahini jar ... I had to buy some after trying them at a local Middle Eastern restaurant. So good!

There's a couple logs of Teese (thanks Daddy!), some apples, and soy yogurt, as well as Earth Balance and probiotic powder. And lots of leftovers .... I actually even took some out for the shoot cause they were blocking the good stuff. Bottom shelf is iced green tea, cold water (I removed the filter from my Brita pitcher because Memphis has some of the cleanest water in the world ... 'bout the only thing clean in this city, but at least we got somethin'), some German white wine, whole wheat pastry flour, and soymilk. And there's a big ol' butternut squash in the crisper with celery, onions, and dill. 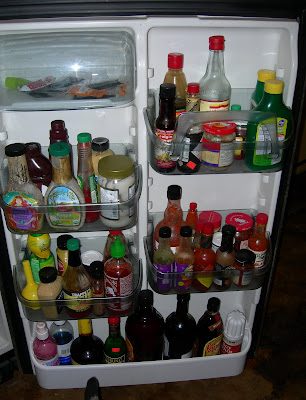 As you can see, about half of these condiments are hot sauces. That's because my friends who used to live in my house left them behind (Tim was a hot sauce freak!). There's also soy sauce, Liquid Smoke, lemon juice, Vegenaise, my favorite Organicsville Non-Dairy Ranch Dressing (a staple in my house), and Amy's Goddess Dressing ... the bottom shelf is mostly liquor (including Absenthe) left behind by the previous residents.

So, what's in your fridge? I wanna know. I'm tagging anyone who has any of these items in their refrigerator:

2) More than 2 bottles of hot sauce

3) Something pickled that's not a cucumber

If you have any of these items, take a picture of your fridge, post it, and tag some more people. Or if you don't have these items but still wanna show off your junk, go for it.
Posted by Bianca at 11:26 PM

I don't think this freezer is messy at all, just pretty well stocked! Oh, and maybe I am in condiment heaven?

i love those Boca vegan chikn patties, and my grocery store hasn't stocked them recently - instead some new version that has a slice of cheese and bun included. Ack! All those hot sauces are great.

LOVE what's stocked in your refrigerator and freezer!! :0)

Haha, I am the proud owner of far more than two bottles of hot sauce in my fridge. Perhaps after a little cleaning I might photograph it. Is that a bottle of sriracha I see in your fridge? Nice!

I love seeing inside people's fridges! I even sneak a peek when I go to friend's houses. Those chick'n patties are pretty good, even my omni sister likes 'em. Oh and have you tried the chocolate sorbet? It's sooo good, same brand.

I love seeing people's fridges and freezers. Thanks for sharing!

Curious...where do you get your probiotic powder? The stuff I found at Whole Foods the other day was $30 for a 30 day supply. That's a bit over my budget.

Your fridge looks clean and tiday! Also, I didn't know Butternut Squash was supposed to be stored in the fridge. Thanks for the Sorbet rec. I'd seen it at Whole Foods but never bought it.

You're a well-stocked woman, Bianca. And a freezer, or fridge, without booze is a sad little unit.

oh, wow, I just found you. I can't believe there's another one of us. I too grew up in the Mississippi river delta (Southeast AR, right on the river, and the LA border; or, as I like to say, the armpit of the world). And I too have been working to veganize many of the Southern and Creole recipes I grew up with. Have you done a vegan Chick'n Dumplin's? if not, email me and I'll tell you mine. www.vegeater.com

I can't get Teese here. BooHoo! I was tagged to do this as well but still haven't :( I think your very organized btw

your freezer looks packed full of awesomeness, Bianca! i have heard gloroius things about the Ciao Bella yummies. mmmmmmmmmmmmmm!

there's a ton of deliciousness in your fridge, too! the butternut squash peeking out is my fav! it's too cute!

I think your freezer looks great! You have lots of variety in there, which is far more important than order in my mind. And you'll see proof of that when I post my fridge pics, because I qualify!

P.S. I bet every vegan fridge has Sriracha and Goddess dressing!

Can I come over? You sound like you have some good eats in your fridge/freezer!!! Especially that gelato =)

I guess since my husband is a hot sauce freak.. I am tagged! Will get to it this weekend hopefully :-)

oh man my fridge and freezer are EMPTY right now :(

i wish my fridge was that big

Come over and organize my fridge!!! Why is everyone storing their alcohol in the freezer? It doesn't go bad, does it? I need that space for fruits and veggies.

Have a great time!!

Look at all your great food! I don't think your freezer is that messy, it's hard to keep it organized when it's full. I have at least three types of hot sauce, so I may do my fridge later, although since we just moved it's much more bare than normal.