Get Ya Grub On

A couple years ago, I had the pleasure of meeting former-Memphian- 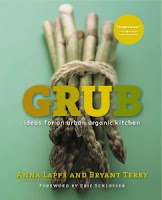 turned-Oakland-based-vegan-chef Bryant Terry at a booksigning at the Memphis Farmer's Market. He was signing his new book Grub: Ideas for the Urban Organic Kitchen, which he co-authored with Anna Lappé (the daughter of Diet for a Small Planet author Frances Moore Lappé).

The front half of the book contains helpful information about the importance of eating organic, whole foods. The second half is made up of Terry's menus for "Grub Dinner Parties." Terry includes menus for any occasion, as well as a list of mixtape suggestions to provide the soundtrack. Not all of the recipes are vegan (a small few even include fish), but many are meat, egg, and dairy free. The others are easily veganizable.

Shortly after reading the book several years ago, I neeeded to plan my annual Samhain feast, in which in dine in memory of all my dead friends and family (not that I have many ... but I like to remember the ones that are gone). Samhain is an ancient Celtic festival that pre-dates the modern Halloween celebration. In one of Terry's Fall menus, I stumbled on a recipe for Spicy South American Seitan Stew and a tradition was born: 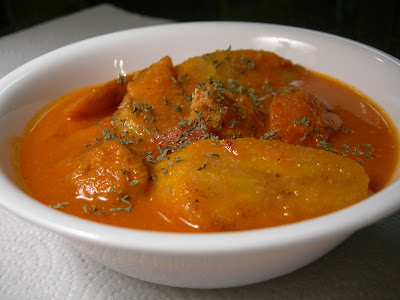 This is the third year I've made this stew for the occasion, and to keep it special, I only make it once a year. You can't tell from the picture, but all those chunks are seitan (which I made using gluten flour and besan flour), red potatoes, and fried plaintain slices. It's simmered in a tomato-y, chipotle broth. So, so good!

I highly recommend the book if you don't already have it. It's great for party planning, but it's also nice to pick one or two recipes from for weeknight meals. On another related note, Terry has a new cookbook due out soon called Vegan Soul Kitchen: Fresh, Healthy, and Creative African American Cuisine, based on the traditional Southern cuisine he grew up with (sans the ham hocks and bacon fat, of course).
Posted by Bianca at 11:11 PM

your Samhain tradition sounds like a very special and unique way to remember those that are gone, Bianca. what a lovely & special tradition, indeed.

the spicy south american seitan stew sounds perfect for fall - and it looks absolutely awesome! enjoying it once a year on your day is a wonderful way to keep your tradition special. that rocks!

i will have to check out Terry's books - the Vegan Kitchen Soul sounds great - i may put that on a wishlist (i hope it comes out sooner than later). thanks!

That stew looks unbelievable! I may have to get new a new cookbook just for that! Thanks for commenting on my post today. Sigg holders unite!

I am so putting those books on my Amazon Wish List! They sound fabulous.

And your stew looks/sounds pretty incredible, too! Yum... You're making me hungry.

Thanks for the review of that book! I've seen it before and always wondered about it.

That stew sounds incredible. I love how you have made it a meal of significance!

that looks so great! i love seitan..but have trouble finding more things to cook with it (i usually opt for tempeh since i have it on hand more often) but that soup sounds great, i should try itt haha :)

Oooh, that stew looks good. I've never heard of that cookbook before, but I'll definitely keep an eye out for it now.

I am so into African spices these days~! Sign me up for that stew!

that seitan stew looks amazing. the plantains probably taste sooo good with it. i've only had plantains with sweet ingredients, but this would be delicious.

What a nice tradition! This is such a savory looking dish!

Huh. I keep looking at that cookbook every time I'm in the local fancy kitchen store. I guess now I'll have to buy it and I can't wait for his new one either...and yours. Ahem.

Bianca, what an awesome post! I do have this book and can't wait to try the stew. And thanks for the heads up on his new vegan cookbook.

Hey Bianca,
I'm just catching up. What a nice post. I like the idea of an annual Samhain tradition - and a special food that only gets made once a year. Very sweet.

Thanks for bringing this book to our attention, I hadn't ever heard of it... but it sounds like my kind of book. That stew sounds positively wonderful. Also, the upcoming book sounds totally rad. :)

Ooh, that sounds GOOD! Thanks for letting us know about new books.

Thanks for telling me about the new book. I saw Bryant Terry speak at the People's Grocery (Emeryville) annual benefit a few months ago, he's awesome!