I've been working on my recipe for vegan mac & cheese for quite a while. I need to include one in my Southern vegan cookbook, but I didn't want to go the traditional "noochy cheezy sauce with noodles" approach. Nothing against that, but that doesn't really warrant a recipe. So I developed a yummy cashew cheezy sauce. Last time I tried it, the sauce was out of this world, but I baked the pasta and it dried out ... ick.

This time, however, I stirred the boiled whole wheat shells into sauce prepared on the stovetop and voila — Super Creamy Mac & Cashew Cheeze: 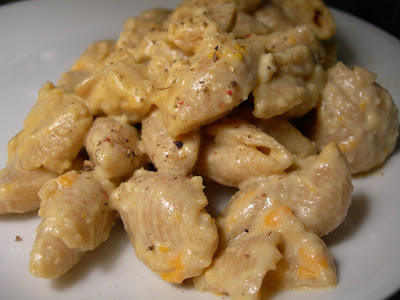 I love this stuff! But I'm not gonna part with the recipe, as it will be featured in my upcoming cookbook (whenever that actually happens ... don't worry, it will come, but I am taking my time).

I created a meal out of side dishes to go along with the mac & cheese. I also made this Southern Fried Okra: 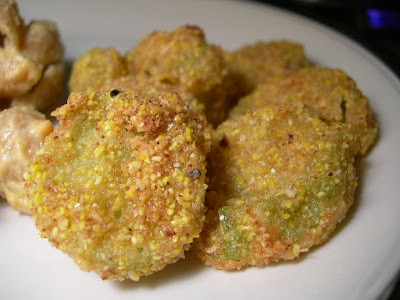 I used Japanese okra from my Granny's garden, so it's a little bigger than an average sized okra ... but still tasty. For the batter, I mixed whole wheat pastry flour, cornmeal, onion powder, salt, and pepper. 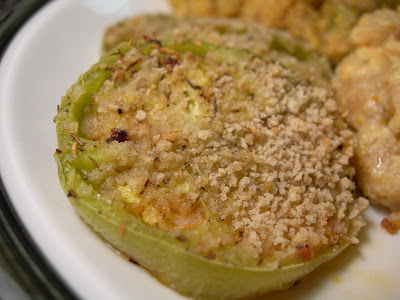 I prefer them fried (in fact, I prefer everything fried), but I knew frying two veggies in one meal would be a bad idea. So I prepared these 'maters (also from my Granny) by slicing them, drizzling with olive oil, seasoning them with thyme and salt, and topping them with bread crumbs. Then I baked them at 350 for about 15 minutes.

By the way, I had every intention of making Cookies and Cream Cheesecake Cupcakes for Iron Cupcake: Earth tonight ... but my plans were thrwarted! I went shopping for something to wear to my ten-year high school reunion tonight (which makes me feel super old), and SHOPPING TAKES FOREVER! By the time I had something cute to wear, Whole Foods (the only place with vegan cream cheese) was closed. And the deadline for Iron Cupcake is tomorrow at noon ... so it looks like I'll be skipping again! Sorry!

So glad you had a great time for your tea party!! The costumes were great.

The mac and cheese looks so good, and you can't go wrong with fried okra.

Oh man, that looks way too good. I love me some mac n' cheez. My 10th high school should be this year too, but I've been avoiding it.

The mac and cheese looks fabulous. . . can't wait for the recipe! :) And I never even thought of fried okra--I adore okra (I know, I'm weird) and this looks like a great way to prepare it.

Have fun at your reunion! Ten years? You're just a baby!! ;)

I was just wishing I had some mac and cheeze, and there you go taunting me with your cheezy goodness...damn it all!

Oh you tease!! :)
That mac and cheese looks perfect! Have fun at your reunion!

Your meal looks awesome! My favorites are fried food too- you can take the woman out of the South, but you can't take the South out of the woman!

that mac n' cheese looks great, and good for you for coming up with an alternative to the very good (but tired) noochy cheez sauce. i'm excited about yer cookbook. btw, i'm sure you know this, you ain't old. go to the reunion with no expectations, and i guarantee you'll be pleasantly surprised. (wink-wink)i'm glad i did and i have #20 coming up in a couple of years!

Yum! Your Mac & Cheese sounds way better than the noochy sauce - which we have just never been able to get into. Between that, the okra, and the baked green tomatoes, I am drooling, and hoping your cookbook comes out soon!

I hope your reunion went well!

my high school didn't even do a 10 year reunion - no one felt like organizing one. ahahahaa. i thought that was pretty awesome. sadface on not be'n able to get the tofutti - it's all good though. who needs cuppies when you have mac n' cheeze of creamy deliciousness?! yay!

Cashews seem to really lend themselves to creamy, cheezy sauces. I look forward to seeing this recipe!

So, why don't you post recipes again? This looks delicious, and I don't think you'd be stopping any dedicated vegan chef from purchasing your book when it finally happens.

Yum yum! Especially that okra, I can hardly wait for your cookbook!!!

I can't WAIT to try this recipe!! In fact, I would like this entire meal. K, thanks. :]

All those veggies look good. I bet they would go great with a beef steak!

Did you say cashews? when's the cookbook coming out? ;-) I have a very unhealthy relationship with cashew nuts...

mmm. fried okra. you are a woman after my own heart.

Can I help you test recipes? I am a real-live bonafide Southerner. that makes me qualified.

Whoa! I would like a bowl of that with the tomatoes, please and thank you.

Well thats enticement enough to get my to buy the cookbook! I'm sick of nooch-sauce too. Looks just like the velveeta shells and cheese my Ma used to make!

Mmm holy crap that looks so WONDERFUL. The mac and cheeese?! with CASHEWS? The best of all worlds. Have you eaten cashew butter? It's basically glory in a jar. I can only imagine with mac and cheese...

I love using cashews in cheesey dishes. i posted a lasagna that i used cashews in, too... for ricotta. mmm.

What an amazing meal! I bought a big bucketful of okra today for $2 from the farmers market. I've never made fried okra but looks tasty!

no cupcakes? that's it: you're fired!

That Mac & Cheese looks so creamy!!! I can't believe how delicious it looks.

just getting around to blog catch up yet again, that mac& cheez looks divine. Glad the move went well & looks like you settled in & started cooking up some good stuff already!

baked green tomatoes? Ugh I love you. I havent had them since I left the south (and went vegan) !

My husband is mad for mac-n-cheese. Can't wait to see your recipe :)